Notre Dame's character as a Catholic academic community presupposes that no genuine search for the truth...is alien to the life of faith...There is, however, a special obligation and opportunity, specifically as a Catholic university, to pursue the religious dimensions of all human learning...through the formation of an authentic human community graced by the spirit of Christ. -from Notre Dame's rather Catholic mission statement

[Notre Dame's decision] is a deliberate thumbing of the collective nose at the Catholic Church...Notre Dame has forfeited its right to be called a Catholic university. -long time Notre Dame professor Ralph McInerny, after Notre Dame's rather un-Catholic decision to honor President Obama 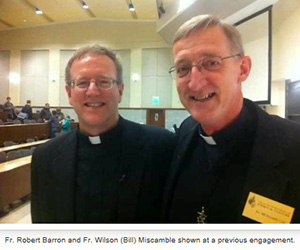 It's not every day you get the opportunity to hear a talk by Notre Dame's fearless-but-friendly, Fr. Wilson (Bill) Miscamble, near your hometown, so when March 11 rolled around, I forked over my fifty bucks (a bargain to be sure!) and hopped the train to Chicago to hear Fr. Bill speak – with actual hope – on "the future of Notre Dame." Speaking of hope, I hoped to at least briefly meet the man of the hour (we had previously conversed only online) in the busy moments before the speech. As it turns out, my prayer was answered by a bear hug.

"Fr. Miscamble? Tom O'Toole," I said, extending my hand, only to be engulfed in the affable Australian's embrace.

"Happy to be here," I responded after he let go. "Say, Father, I read that you're the Paluch Chair of Theology at Mundelein [Seminary] now," I commented. "Does that mean you're teaching at Notre Dame AND Mundelein this year?"

"No, Tom, I'm on sabbatical. I'm only teaching at Mundelein now. I'll be back at Notre Dame next year."

"That's if they let you back in," I said with my eyebrows raised comically.

"Oh, there's a lot of people who would love to prevent me from coming back," he said, acknowledging the truth with humor. "Fortunately, there's a thing called tenure," winked the man who has spent a quarter of a century fighting for the soul of Our Lady's University, before excusing himself toward the podium. Unfortunately, I caused a virtual panic retelling the "joke" as many of the faithful jumped to dire conclusions before hearing the punch line.

"Father's totally gone from Notre Dame this year, and we were discussing if the University will let him back in..." I said, before being cut off.

"Oh, my God! The board hates him!" said the first woman. "I bet they try to block him from coming back!" added another. "This is terrible for Notre Dame!" piped the third. "Relax!" I cut in, "Father Miscamble has tenure!"

"Oh, thank God," said the first. "This is one of the rare times that tenure is a GOOD thing," said the second, as the third nodded in relief.

After a stellar version of the standard salad, chicken and potatoes lunch, Fr. Miscamble began his talk, entitled, "What is the Future for Notre Dame?" Indeed, it was a sad tale I've both heard and written about many times before, yet there was something poignant about hearing it in person from the person perhaps most responsible for the University's counter-reformation. Although I'm sure Miscamble realized that for the most part he was singing to the choir that day, he warned the rest that, "[i]f you've come to hear some carefully prepared PR fluff, you've come to the wrong place."

Father began his lecture going from the general to the specific, noting that Notre Dame was part of an amazing push in the nineteenth and early twentieth century in which the Church built a massive Catholic culture of dioceses, schools and hospitals, "all at a time when Catholics had neither the wealth nor education they do today." After that ironic statement, Father flashed forward to the subtly diabolical 1967 "Land O'Lakes" document, which promoted scholarly dialogue at the expense of magisterial obedience. "After a series of seemingly insignificant decisions, Notre Dame found itself both confused and lacking confidence in its Catholic identity," so much that Notre Dame president, Fr. John Jenkins, and the ND Board of Trustees. could go against the directives of the bishops and forsake Truth for prestige by honoring the radically pro-abortion Obama.

While not denying that Notre Dame is at the crossroads of returning to its Catholic roots or becoming another Vanderbilt or Duke, former religious universities that are now almost completely secular, Miscamble, after acknowledging some positive steps the University has taken since the Obama disaster (not the least of these being "Notre Dame's suing of the Obama Administration over clauses in the Affordable Heath Care Act") offered four practical ways to return from Land O'Lakes to Ex Corde Ecclesiae, John Paul II's "Magna Carta" on how a Catholic university should operate.

Although my one through four list of ways to save Notre Dame all involve naming Fr. Miscamble as Notre Dame's president (an online petition, anyone?), barring that miracle, Father's outline is the way to reform. First, Miscamble says you need a clear articulation of your mission statement. Noting that Notre Dame's is actually pretty good, Father adds that a mission statement is "meaningless unless it shapes the University," as was clearly not the case with honoring Obama and allowing annual campus performances of The Vagina Monologues, which, in Fr. Jenkins' own words, includes "graphic descriptions of homosexual, extramarital...and auto-erotic [sex, including] the seduction of a sixteen year old girl by an adult woman," or as Miscamble would add "reduces women to their body parts."

Second, the Catholicity of the faculty is of utmost importance. Indeed, the hiring of faculty both "ambivalent" and "openly hostile" to Notre Dame's mission may be the University's gravest mistake to date. On the other hand, the hiring done during Miscamble's brief five-year term as Chair of the History Department show it is far from impossible to turn a faculty around.

Thirdly, the curriculum must be re-examined. Of course, Father acknowledges that curriculum is intimately tied to the faculty, because even the finest selection of Catholic core courses (I myself am pushing Notre Dame to add one on the novels of Ralph McInerny) unless taught by the right teachers, could do students more harm than good.

Finally, Notre Dame needs to re-explore its choices regarding student life. While praising the great availability of the sacraments at Notre Dame, including daily Masses in all the dorms, Father says Notre Dame must do more to distance itself from the partying, hook-up culture of secular universities, and providing entertainment choices such as The Vagina Monologues, or bands such as the one that ended their concert my freshman year with a rousing rendition of "Let's Get Drunk and Screw," just isn't cutting it.

After a heartfelt round of applause, Miscamble gave way to his colleague, Fr. Robert Barron, narrator of the fine Catholicism TV documentaries and rector of Mundelein Seminary. Barron echoed many of Miscamble's warnings, noting that between the "dumbed down, banners and balloons religion being taught in Catholic grade and high schools, and the Land O'Lakes Catholicism offered at many Catholic universities, Christ became just one of many options to follow, and Catholic theology was no longer at the center." But "when Christ is no longer at the center, a center in which all other subjects find their meaning," Barron noted that "something else will take His place." Indeed, dialogue became god, and laws at many Catholic universities were no longer dictated by the Church but by the faculty or even the state, as Obama's honorary degree of Law from Notre Dame sadly indicates.

After the question and answer session, a surprise announcement was made that not only would everyone in attendance receive a copy of Fr. Miscamble's new book, For Notre Dame: Battling for the Heart and Soul of a Catholic University, but we were welcome to wait in line to get it signed by the author himself. When my turn came, I was holding not only a copy of Miscamble's For Notre Dame, but Charles E. Rice's companion volume What Happened to Notre Dame? which I was re-reading on the train ride down. After Father signed his book to me, "With every good wish and blessing, In Christ, Fr. Bill Miscamble," I related how I was introduced to him through Rice's book, which ran a copy of Father's inspirational alternative commencement speech to the brave students who refused to attend the Obama award ceremony and "graduated" with Father at the grotto instead.

"After telling these courageous students to keep fighting for Notre Dame," I said, "you recalled Sam's words to Frodo from the Lord of the Rings, how 'ordinary folk' just seemed to land in these save-the-world situations...and how they would have never accepted their mission if they had known how difficult the task would be. Did the fact that Sam was played in the movie by Sean Astin, who also played Rudy, have anything to do with your use of that Tolkien passage for saving Notre Dame?"

"Actually, my daughter – through her boyfriend – has become quite a fan of Tolkien, and we were just talking about that famous passage from both the book and the movie – "

Father took Rice's book from me. To the secularist, the simple explanation was that Father had read my mind. But to the believer, the more accurate description was that he had just read my soul.

"What is your daughter's name?" he asked kindly.

"Therese – like 'the Little Flower,'" I said, because with devout Catholics, this was even easier than spelling it out.

"Therese," Father wrote, and then paused to re-read Sam/Tolkien's words for inspiration. Suddenly a light bulb (or was it a halo?) clicked on above Father's head, and he finished the dedication.

Simple words, I thought, and yet perfect, both for Therese, just out of college and still pondering her ultimate vocation in life, and for Sofia, the daughter of a devout-but-concerned Catholic mother who Our Lady just happened to have sit next to me during the talk, who was just accepted at Notre Dame and was now pondering whether or not to enroll at that troubled-but-wonderful school. As for myself, some other oft-quoted words, from another famous movie about the struggle between good and evil, came to mind – or rather, entered my heart. Concerning my current feelings toward Father, the closing comment from Casablanca seemed to sum up the new relationship between the Aussie priest and the Irish poet, two loyal sons who had both long battled for Our Lady's University. As Bogie would say, "I think this is the beginning of a beautiful friendship."