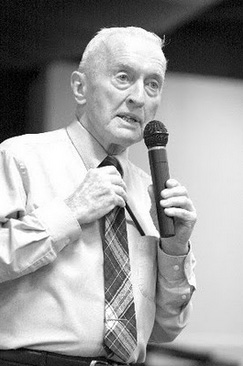 Notre Dame Professor Emeritus Charles E. Rice died Wednesday night at the age of 83. Besides being a brilliant law professor and a devoted husband and father of ten children, Rice was a tireless defender of all that is good about Notre Dame. In humble tribute, I'm re-running my review of his last book, What Happened to Notre Dame? in hopes that those who didn't know Dr. Rice get a glimpse of his greatness, and those who remember him, never forget his battle cry to continue the fight. God bless you, Charlie Rice! Pray that we, the faithful Fighting Irish, see your cause of saving Notre Dame to its completion.

Of "Rice" and (real) men: What [the hell] Happened to Notre Dame?


"The University is where the Church does its thinking" – former president of Notre Dame, Fr. Theodore M. Hesburgh.

"The Catholic university today must be a university in the full modern sense of the word...[it] must have a true autonomy and academic freedom in the face of authority of any kind, lay or clerical, external to the academic community itself" – from the 1967 "Land O'Lakes Statement," sponsored and co-written by Fr. Hesburgh, which severed Notre Dame and many Catholic universities' juridical ties with the Church.

"The fundamental dogma of the Enlightenment is that man must overcome the prejudices inherited from tradition;...free himself from every authority in order to think on his own, using nothing but his own reason...Truth is no longer an objective datum, apparent to...everyone...It...becomes merely external, which each one grasps from his own point of view [until] the same truth about the good becomes unattainable" – from the 1991 "Address to the Consistory of College of Cardinals" by Cardinal Joseph Ratzinger, now Pope Benedict XVI. 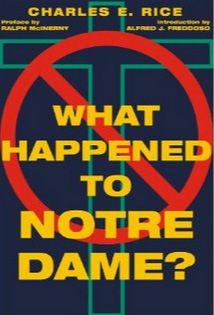 Charles E. Rice's What Happened to Notre Dame? (St. Augustine's Press: South Bend, 2009), is not only a pull-no-punches account of the Notre Dame-Obama fiasco, but a precise retelling of the University's gradual descent into relativism that made their dubious decision to honor and reward the "Abortion President," which shocked the bishops and enraged the faithful, almost inevitable. And yet, the true beauty of this book is that, as deep as the descent (and dissent) may be, the author of the book, as well as the writers of the rousing Appendix and insightful Introduction, all believe that it's not too late for Notre Dame to humble itself before Our Lord, and rise again to its rightful place as our country's "flagship" University. The aforementioned Introduction, written by Rice's colleague, associate professor of philosophy at Notre Dame, Alfred J. Freddoso, is a powerful pamphlet (or shall we say "tract"?) in and of itself. In it, Freddoso compares Notre Dame's current Catholicism to that of a "public school in a Catholic neighborhood," a "Purdue with a Golden Dome" if you will. In other words, "the university's sacramental life," along with "the statue of Our Lady atop the Golden Dome, the Sacred Heart Basilica, the Grotto, 'Touchdown Jesus' and scores of other statues is...[where] virtually all of a student's moral and spiritual formation, if any, will take place." This is because that, although there are more professors at Notre Dame than the average "national private university" who can "provide a student...something resembling a Catholic education," Freddoso reveals that "Most faculty members would...be deeply disturbed by the prospect of having doctrinally orthodox Catholicism intrude itself into the classroom" (pg.xiii). But just when the dedicated but pragmatic professor says he "had long ago given up trying to 'save' Notre Dame," something "not possible in the 80s," a group of "JP2 students" who were "sort of, well, holy" appears to have changed his mind about ND's future salvation.

Meanwhile, Rice, Professor Emeritus of Law at Notre Dame, as well as a former Marine, reports thoroughly and honestly on the intelligence history of the war on othodoxy at Our Lady's University, as well as providing a detailed battle plan for victory. For example, Rice (citing a report by St. Louis University professor, Donald T. Critchlow) shows how the Land O'Lakes Statement, which looking back could accurately be called Notre Dame's "Declaration of Independence" from Rome, was actually preceded by a series of annual meetings on "population problems" held at Notre Dame from 1963 to 1967. These meetings, sponsored by the Rockefeller and Ford Foundations (both of whom would later donate big bucks to Notre Dame's endowment) were held in "quasi-secrecy" because "only liberal Catholic clergy and academics were invited." They, along with groups like Planned Parenthood Federation of America and the Population Council, met to "create an oppositional voice within the Catholic Church on family planning," and "in 1965 these thirty-seven scholars released a statement...to the Vatican...urging the pope to reverse the church's opposition to artificial contraception" (pg. 45). "In turn, Father Hesburgh, while sincere in his desire to explore the family planning and population issue, realized that association with the established foundation community could only benefit his university by imparting a certain respectability that comes from associating with eastern philanthropic foundations." In a nutshell, these associations, along with the prestige (and money) they brought, go a long way to explaining not only Notre Dame's subsequent history of hiring Catholic imposters like Fr. McBrien instead of more real Notre Dame men like Rice or Freddoso, but its continual honoring of pro-abortion politicians like Mario Cuomo (1984), Patrick Moynihan (1992), and finally Obama.

In the end, Rice concludes that, despite Father Ted's good intentions, the Hesburgh inspired "Land O'Lakes Statement" has created "an alternative magisterium" at Notre Dame (and other LOL Catholic colleges) and must be abandoned ASAP in favor of Ex Corde Ecclesiae (the Vatican's 1990 directive on Catholic universities) and the real magisterium. Otherwise, according to Fr. James Burtchaell, C.S.C., it will follow in the footsteps of Protestant universities such as Vanderbilt (or Catholic universities such as St. Mary's College in California) where "the estrangement from the sponsoring church came...when new secular sources were offering funds" (pg. 51). Rice, like Freddoso, also draws hope from ND Response, the John Paul II inspired students who stood up to Notre Dame's president, Father Jenkins, and President Obama, by holding a prayerful protest and an alternative "Grotto Graduation." Indeed, not only is Fr. Wilson Miscamble's address to the "troops of Truth" on May 17, 2009 (which Rice has included in its entirety as an Appendix), enough to rouse the dead, but after hearing this loyal Holy Cross priest declare, "While the administration and many of the faculty sold out for the photo-ops, YOU held firm to the foundational principles of respect for life...and showed the benefits of YOUR Notre Dame education," it is easy to believe not only that "this painful episode..IS NOT THE END OF THE STORY!" (pg.159), but that the tide may actually be turning.

As an obviously interested observer and fellow journalist of the Notre Dame loss of faith saga, there are a few points I would like to make in addition to my offering the book my utmost praise. First, while I believe Freddoso's analogy of Notre Dame as a public school in a Catholic neighborhood is essentially correct, I would like to add that (perhaps to the dismay of the not-so-Catholic faculty) the presence of the Eucharist, in the form of both the liturgy and adoration, should (in conjunction with the devotion the Grotto and statues inspire) by definition be enough to sustain the hardcore Catholicism at Notre Dame during times of intellectual (and sometimes physical) persecution.

Also, although Professor Rice totally destroys the liberal policies of Fr. Hesburgh and disproves any possibility of both Land O'Lakes and a Catholic Notre Dame together surviving, Rice, in addition, states that, despite my "explicit and strong disagreements with Fr. Hesburgh...I very highly respect [him]. In the four decades I have been at Notre Dame, I have seen numerous examples of his integrity and kindness...please do not interpret criticisms of...actions or policies as personal disparagements of him." This stance, then, is surely "hate the sin but love the sinner" to an almost saintly degree. For when Rice states, "What a mistake, and what a needless one, for Notre Dame, over the past four decades, to renounce obedience to that source of Truth and of Hope. And what a missed opportunity to introduce students and so many others to that inspiring truth..." (pg. 142), certainly Rice realizes that Hesburgh, as this "mistake's" architect, must be in some part responsible for the lack of Truth and loss of Hope these students suffered because of it. Which can only mean that Charlie Rice must also pray a great deal so that his now, nearly-blind friend, not only sees his mistake before he meets his Maker, but takes whatever steps a 93-year-old former president can still take to correct it.