April 15, 2009
Recently on FOX News I saw Kathleen Donahue, Notre Dame student and head of Notre Dame Right to Life, fend off questions about Obama's upcoming visit. And, while unlike CNN or ABC, the news anchors were generally sympathetic, she still had to answer to a rather nasty liberal comment 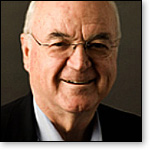 attributed to none other than Notre Dame's noted theological dissident, Fr. Richard "The Lyin'-Hearted" McBrien. And while Ms. Donahue debunked Father's drivel (McBrien flippantly claimed the flap over Obama's speech was only due to a few "fringe far-right Republicans who were still sore that McCain lost") with more dignity than it deserved, it reminded me once again how enthralled the MSM is with this menace of theology, and how crucial to the quest of saving Notre Dame his banishment from the University truly is.

It was back in the early '80s when then ND President Fr. Ted Hesburgh, having recently tricked Pope Paul VI (the Pope shared Hesburgh's love for the space program, and after partying on wine, champagne and bourbon one night while watching NASA filmstrips, Paul thought Hesburgh was his trusted friend) into letting his band of liberals write the document on Catholic academic freedom virtually unchecked by the Vatican, hired the horrific heretic McBrien to head Notre Dame's Theology Department. Fresh from publishing his critically acclaimed (acclaimed, that is, by every noted critic of the Church) comprehensive encyclopedic explanation of the Church, simply entitled Catholicism, McBrien on the surface appeared to be the perfect Fighting Irish faith fit. That is, until one actually read it. After being stunned by passages that suggested the Immaculate Conception wasn't really taught infallibly, but an affair of Jesus with Mary Magdalene was a distinct possibility, I wrote shortly after my graduation from the University, in a magazine called Fidelity, "But McBrien's doctrine of 'selective obedience' is like being faithful to your wife only when your sexy secretary is out of town; in other words, it isn't obedience at all. If McBrien truly believes this way, I can only conclude that he and his cronies will eventually split from Rome and, as the pope of the new American Catholic Church, surround himself with a bevy of women bishops who will selectively listen."

It is now more than a quarter of a century since O'Brien invaded Notre Dame, and as dire as my predictions were then, I am writing now to sadly inform you all that something far worse has happened. Sure, the National Council of Catholic Bishops almost immediately condemned huge sections of Catholicism, and Notre Dame gave McBrien a slap on the wrist by demoting him from Head of Theology to a Department Chair. But all the while he was allowed to stay, winning media friends and influencing gullible students along the way. By the time his third edition (with revisions ordered by the bishops) of Catholicism arrived in 1994, it almost didn't matter that the bishops condemned this volume also (saying in part "not only has McBrien failed to correct previously noted ambiguities, but he has introduced new ones ... on a number of important issues, the reader will see without difficulty that the book regards the official Church position as simply in error") for the damage had been done. McBrien had not only gained a foothold of theological power, but his alternative church was already in place.

To put in simple terms, McBrien's new theology stated that, after Vatican II, the Catholic Church's teaching was only valid (or infallible) when it agreed with the "concensus of theologians"... including the Protestant ones! In reality, McBrien was countering the Magisterium with his own "para-magisterium" which the late great Fr. Richard John Neuhaus quipped consisted of "Fr. McBrien and others whom he recognizes as belonging to his sacred college of academic theologians." If he was still with us, surely Fr. Neuhaus, the noted Catholic convert from Lutheranism, could point out that this was Luther revisited  with an important twist. For whereas Luther split off from the Church to spread his new theology, Fr. McBrien cleverly hid his new deviant church within it. And, while whether or not Luther's split was good for Christian unity is the topic of another story, the fact is that McBrien's secret deviance is much more dangerous. For while dubious morals gave Luther an excuse to change theology, devout theology motivated McBrien to change morals. And, as the story of Adam and Eve shows decisively, "shadow morality" is something the soul cannot long survive.

Still, the fact McBrien has not just survived but thrived is a tribute to his subtlety. Obama, as did Hitler, advocates a Culture of Death. But what Hitler did with a rant, Obama does with a smile. Similarly, whereas Luther proclaimed the Pope to be "the Antichrist" and predicted the Catholic Church would fall in his lifetime, McBrien merely hinted that John Paul's "ultraconservative" bishops left him "out of touch with reality," while whispering "some of my liberal friends just say he was a disaster." You might even say that slight of hand and shift of blame is the trademark of McBrien's reign. For example, while playing the role of "Catholic Church expert" on ABC's Primetime Live during The Da Vinci Code debacle, Father first noted the Church's insistence that Jesus was single, and thus seemed to be in agreement with Church doctrine. But moments later, when asked about the DC's take that Christ married Mary Magdalene, McBrien added, "If Jesus was married ... it was obviously to her."

And, as his own volume Catholicism has effectively replaced The Catechism of the Catholic Church as the teaching authority of the new Notre Dame para-magisterium, McBrien and his minions are free to make their own counter-rulings on Church statements  including Jenkins' kooky conclusion that the Bishops 2004 prohibition of pro-choice politicians to speak at Catholic universities excluded Obama ... because Obama wasn't Catholic. Never mind that the bishops who wrote the document said that this interpretation is bogus, or that the average fifth-grader could show you the pronoun "Catholic" referred to the University, not the politician. Yes, in any other era, such a lie would be laughable, yet after Obama looked the nation in the eye and lied he would work to lessen abortions  and the Catholicism clan BELIEVED him  I find little to laugh at lately.

But it's one thing to identify our new Antipope, Richard the Worst, to show that he is the cancer in this Church's body; it's quite another to destroy this cancer without killing the body along with it. WWJD is the question in every case of this spiritual magnitude, but in this specific trial, WWTD (What would [Randall] Terry do; this "TD" does NOT refer to "Touchdown Jesus") must be employed. Sources have it that Mr. Terry has Mr. Alan Keyes arriving in South Bend Thursday to lead a chorus of pro-life protest, but for McBrien to permanently go flyin' it must be something more. Shouting at the city gates or even picketing Fr. McBrien's Tues./Thurs. Theology class is not a bad start, but for Keyes to hold the key, Alan would have to enter the class and challenge the wayward professor to a one-on-one debate. "The True Church vs. the 'new church,'" Alan's "'Keyes' to the Kingdom" vs. Richard's "Highway to"... well, you know the rest.

It would be, as they say at ESPN, an "Instant Classic," and while McBrien really has nothing to gain at Notre Dame, his great ego might persuade him that he cannot lose. And yet, if McBrien took the bait-and lost, his credibility would fly away like an untied balloon, and his "church" go the way of the Studebaker; not just because Keyes is a great (and Truthful) debater, but because Alan knows that Jesus would never allow McBrien to take His Mother down with him. And, with McBrien gone, and Jenkins once again in hiding, Obama would no longer risk a South Bend visit. For the Light reflecting off the Dome would once again be shining, and it's too hard to lie when you squint.