Tom O'Toole
Saving Notre Dame: "Hopeful" on Obama?
My letter to the president 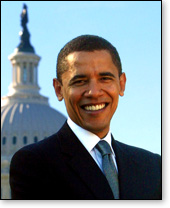 Congratulations on your first 100 days. While we don't always see eye-to-eye on the issues (for example, I believe pro-choice people are butchers and murderers, while you guys label right-to-lifers "extremists" and "terrorists") I would never accuse you of being timid or unambitious. Why, just with the life issue alone, you've made so many changes  from the Mexican City Policy to increased embryonic stem cell destruction to giving high school girls the morning-after pill without parental consent to picking that woeful foe of fetuses, Kathleen Sebelius (do you have some weird fetish for fallen-away Catholics?) as Health and Human Services Secretary  that bloggers can barely keep up to date with their posts, and abortionists barely have time to sweep up the additional body parts. Still, although the pro-life, pro-family agenda is my general area of concern, my single-issue for writing you today (since I know your Homeland Security honchos get such a kick out of calling us single-issue groups) is your ill-timed commencement appearance at my alma mater, Our Lady's University, better known as Notre Dame.

Actually, Mr. President, there are several reasons, both moral and political, that lead me to believe that you should rethink your decision to accept this invitation. First, that fine Catholic woman (and your old law professor at Harvard) with whom you were going to share the Notre Dame stage, former U.S. Ambassador to the Vatican, Mary Ann Glendon, has opted out of her medal of honor. 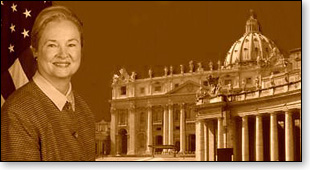 Hearing of the University's "defiant" and "disrespectful" decision to "debate" the bishops' position by also inviting "a prominent and uncompromising opponent of the Church's position on issues involving fundamental principles of justice" (that's you, my man!) she has jilted Fr. Jenkins, declined the Laetare Medal, and has left you hanging on Father's altar of adulation to "dialogue" alone. I guess it's understandable, seeing your penchant for unrepentant Catholics, that Vatican ambassadors are the one area of diplomacy that you haven't had much luck with; since showing the venerable Ms. Glendon the door, you haven't even come close to filling the position. So I'll let you in on a little secret; Pope Benedict is perhaps the only world leader who hasn't been swayed by your stylish rhetoric, and to ask him to work with the likes of Caroline Kennedy, is the equivalent of expecting you to hire Alan Keyes as your press secretary.

Of course, saying "no" to Notre Dame would not only be a nice, "no hard feelings" gesture to your former Harvard professor, it would also be a great way of showing the Vatican that, while you don't always agree with Benedict XVI, you're also not trying to openly piss the Pope off. Still, there is even more at stake politically in your own country from the Notre Dame fallout than there potentially would be in Rome. Know, Mr. President, that the 350,000 who, by signing the Cardinal Newman Society petition protesting your Notre Dame Address are putting their names on the Department of Homeland Security's Most Wanted List, are not doing this on a lark. For, unlike fawning Fr. Jenkins himself, they realize that by his decision to invite you and thus disobey not only his local bishop, John D'Arcy, but the U.S. Council of Catholic Bishops and, by extension, the Holy Father himself, Jenkins is putting pleasing you above obedience to his Church. And, since Catholics believe this "one, holy, Catholic and apostolic Church" was founded by Jesus Christ, Jenkins is in effect putting you above Christ as well.

And so, President Obama, while it is no great shakes in and of itself to have a spineless jellyfish like Jenkins groveling at your feet, the political ramifications of your laying claim to Notre Dame are enormous. By being honored and adored by the powers that be at the "flagship" U.S. Catholic University, you will be in effect proclaiming, "I am now not only your President, but the new voice of the American Catholic Church! Screw those single-issue, old-school followers of Rome; your buddy Barack will show you a better way!" Of course, by doing so, you are not only setting the groundwork for a "National Catholic Church" such as that which exists in China, but are opening the door wide to those who google "Barack Obama" and "the Beast of the Book of Revelation" on the same line. And I do not mean crackpot conspirators who babble about Jews and world banks, but humble and devout men such as award-winning Catholic journalist and novelist, Michael O'Brien, who after watching your Berlin speech last summer (and hearing the commentator call you "the next President of the United States ... and the future President of the World") concluded that while this "powerful manipulator" who "intends to become the most effective advocate of state-sanctioned murder ever seen in America" may not be the Antichrist, he at very least is "one of several key figures who (knowingly or unknowingly) will be instrumental in ushering in the time of great trial, the Church under its last and worst persecution." And Mike wrote that before the election, without knowing how many pro-choice choices a man with "appealing eyes and ... a smile" could make in just a hundred days ...

Yes, Mr. President, I know it's heady stuff, but if you "just say no" to Notre Dame, all that talk about state-sanctioned churches and pro-life persecutions will fade away, at least for the time being. On the other hand, if you still plan to command and commend the destiny of those young souls in the land of the Fightin' Irish in the midst of this firestorm, the loyal sons and daughters who have remained faithful to Our Lady are left with no illusions except to expect the worst. For it is only in this context that the wayward words of your girl, Secretary-of-State Hillary Clinton, suddenly make sense. After she praised the policies of China, which until your administration had been considered by the United States as a gross violator of human rights, she then expressed "awe and admiration" for racial eugenicist Margaret Sanger for "her courage, her tenacity, her vision." For the policies of China (where the true Catholic Church has been driven underground in favor of a weak, always-in-agreement-with-the-government version) which forces abortion and sterilization on couples with more than one kid, and Sanger, who lobbied for sterilization of blacks and minorities, saying abortion "was the most merciful thing a [poor] family does to one of its infant members" are really one in the same, and we can only assume, through the "benevolent" force of universal health care, that this is also part of your murderous unborn endgame. Surely, Mr. President, you must at least find it ironic that Sanger saw in her vision the promotion of "three or four colored ministers with social service backgrounds and engaging personalities" to help us to "exterminate the negro population." An Obama coup at Notre Dame would do Sanger one better; it would usher in the era where a single black man could exterminate the children of any segment of the population that did not agree with, or was not worthy of, the new and improved American lifestyle.

But I guess, Mr. President, that as dire ("angry" is the word you used Tuesday) as it now seems on both sides, I agree with you that fear can always be tempered by hope. For the pro-lifers, although we are painfully aware that wholesale murder of the unborn can quickly spread to those who wish to protect them, loyal Golden Domers also know that, when it comes to Christ's Church, "the gates of hell will not prevail against it." And, while I can understand why you and the pro-aborts at Homeland Security might fear certain pro-lifers, since those who live by lies are always somewhat wary around those who promote Truth both logically and lovingly, I still say your apprehension is a little bit misplaced. For in the end, it is not us you need to fear  but Him.