February 2, 2010
Joseph: [desperately] Look at all those woman entering the abortion clinic!

Mary: [pleadingly, as she fingers her rosary] Oh Joseph! Who will save them?

Joseph: Look! Getting out of the beater-van, with all the cool bumper stickers!

Mary: [squinting] It's a bishop!

Joseph: [peering intently] It's a saint!

Together: [realizing, then rejoicing] No, it's... LIFEMAN! 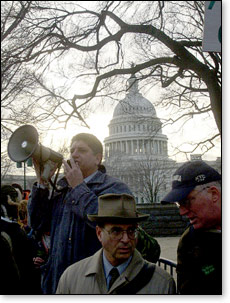 Like most boys, I went through the superhero stage, and enjoyed my share of Superman and Batman comics until books about sports superstars (the sanitized kid versions, that is) replaced them. Now that I'm grown up (and read stories about Christ and His saints) I fight the battle for the unborn, and wonder (with the passing of Mother Teresa and John Paul II) if there are any pro-life heroes left. And then I remember that gallant figure in the often goofy costumes, who (when he's not in jail) is always on the front lines doing anything and everything to save the babies; the guy I like to call "Lifeman," the one and only Randall Terry.

While many deserve kudos in standing up to the Culture of Death that John Paul predicted and Barack Obama perfected, perhaps only Terry deserves superhero status, not only for his years of service, but for the creative ways he still fights abortion 24/7. Faster than a speedy Blackberry, stronger (or at least more clever) than the local authorities, able to leap Planned Parenthood barricades in a single bound, Terry has the uncanny knack of pinpointing where ground zero in the abortion debate is, then being the first to get there and do something about it.

At Notre Dame, when University President Father John Jenkins invited President Obama to be honored and give the commencement speech against the directive of the American bishops (and Rome itself), Terry not only shamed Jenkins' local bishop, the usually timid Archbishop John D'Arcy of South Bend, into speaking out against the invitation, but led a movement of nearly a hundred bishops and hundreds of thousands of lay people to condemn Jenkins by exposing what a fraud of a priest he really was. Back in Washington, Terry mobilized the pro-life forces to protest against the abortion funded, "death panel-ed" health care bill, and though he is reluctant to call the bill-killing newly elected Senator Brown "Great Scott" as many Republican pundits do (instead boldly comparing it to the United States cozying up to Stalin in order to defeat Hitler in WWII) he has to be given much credit for the voters' rebellion. Finally in Kansas last week to witness the Scott Roeder trial, Terry chided the judge and jury for being one-sided; if pictures of Roeder killing Tiller in cold blood could be used to (justly) condemn Scott to prison, the photographs of the late term aborted babies Tiller and his cronies murdered should have been shown to condemn them to the same fate. 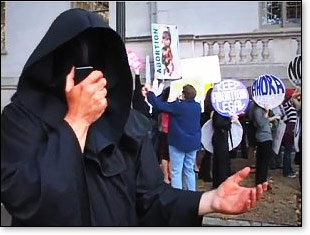 Although many cynics argue that, given the fact Obama did speak at Notre Dame, Roeder did receive the maximum sentence (which he is now appealing) and, of course, thousands of babies are still murdered in this country every year by legal abortions, that Randall's in-your-face, often eccentric (my favorite is still when Terry, dressed as the devil, seranaded a bunch of flabbergast pro-choice feminist protestors to the tune of Frankie Valli's "You're Just Too Good to be True") tactics are no longer successful  but that's like saying Mother Teresa was a failure because there are still poor people in India.

To me, Randall Terry is to the pro-life movement what the vigil candle is to the Eucharist. Just as this candle is always near the Eucharist (the center of Catholic worship) and is always lit to remind people that Jesus is really present in the Eucharist, Randall is always near the center of the pro-life fight, reminding us with his unique light on the subject, that the Unborn are really people too. Many, because of its appearence, may doubt the Bread and Wine is really Jesus, and many, despite the fetus' appearance, doubt it is really a girl or a boy. But if Mother Teresa did more than anyone I knew to clear up the first misconception, Mr. Terry is getting close to "The Saint of the Gutters" when it comes to disproving the second.

Does that mean that Lifeman, complete with megaphone, bad Obama costumes, and bloody (doll) baby props, is not "just" a superhero...but a saint? I guess it all depends on..."Hey Mary! Joseph! Are you allowed to wear masks in heaven?"