I guarantee you that once you take up this book you will not put it down until the end of the world. Here is a meaty page-turner with the pace of a thriller, beautifully written, and that something more that turns entertainment into literature. — Ralph McInerny, from his review on Father Elijah

[Until] Obama's speech in Berlin, I couldn't understand why everyone...pro and con, was getting so excited about him. But after Obama had mesmerized the crowds and a commentator from German television had said, 'We have just heard the next President of the United States...and the future President of the World'...I now think there's more here than meets the eye. — Michael O'Brien, commenting on the similarity between Obama and the character in Father Elijah

The universal Church is in disarray. Bishops against bishops, cardinals against cardinals. Efforts to rally the faithful behind the pope have had almost no success. Our people don't read; they don't think! — Dottrina, from Father Elijah 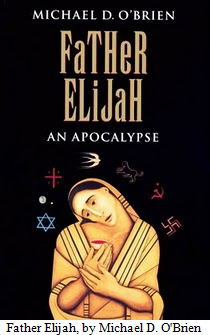 It was several months ago when I read the news that Father Elijah An Apocalypse, Michael D. O'Brien's brilliant and insightful novel about the end times, was being made into a movie. Great, I said to myself, I hope it works out, not about to give it another thought until after the film came out — until 'the voice' came. Write a review, it said, to which I quickly responded I can't. You see, I had read Father Elijah a dozen years or so ago, and I knew with that span of lapsed time, a proper review would require a re-reading of the 597-page classic, something I simply didn't have time for. Besides, I reasoned, I was in the midst of reading the entire series of Ralph McInerny's more than fifty Catholic mystery novels, and since I was nearly two-thirds of the way through, I figured I couldn't stop now. But suddenly, I stood up, and started walking. It was as if "St. Ralph" himself led me over to the bookshelf to the spot where my copy of Elijah stood, and when I pried the book loose and it fell back cover up onto a table, with a sliver of sunlight illuminating the above McInerny quote that I had barely noticed years before, I knew someone up there was telling me "Mac's" mysteries could wait...

If everyone likes to read a good mystery, I'm guessing from the number of titles on the bestseller list that a considerable amount of folks love a good "end-times" novel too. Written in 1996 when the end of the millennium hysteria (remember "Y2K"?) made doomsday titles a dime a dozen, after my re-reading I realized that Father Elijah not only stands out but gains in stature over time, especially among the Christian-written, Book of Revelation based tales. This is because, as O'Brien states in his Introduction, Elijah follows not the simplest interpretations that "Revelation" "refers solely to John's own time," or "it is exclusively a meditation on the end of things," or even "a map of the Church's history." Rather, it is the interpretation "favored by most of the Church Fathers...a theological vision of a spiritual landscape" (FE pg. 12) that combines all three. Thus, while O'Brien's novel contains enough "meat" to keep an intelligent agnostic reading, and enough Bible quotes to keep the average Evangelical turning pages, it also contains enough revelations to reduce even the lukewarm Catholic to prayer and fasting.

O'Brien's story centers around David Schäfer, who as a Jewish lad in Poland, barely escaped the Nazi concentration camps which consumed all of his relatives, and fed a raging adult ambition to reach a position of world power where he could realistically exact his revenge. Yet we know all this only in retrospect, for the tale opens in Carmel where Schäfer, due to a mysterious message delivered to him some two decades ago, is now living out his days as a sequestered Carmelite Monk. But Schäfer's new peaceful existence as the humble Father Elijah is once again disturbed by another life-changing note, this time from the pope himself. Incredibly, the Holy Father has chosen Elijah of all people to convert the most powerful man in the world, a man who Elijah was once like, but is now dangerously close to becoming the Antichrist.

Initially, if not through the major portion of the novel, the pope's choice of Elijah to fight this most decisive of battles seems a terrible mistake. The president's (now of Europe, but soon of the whole free world) acceptance of Elijah's contrary beliefs and his compassion toward the priest's tragic past seems so sincere that Elijah first doubts his opponent's evil intentions, and later his own Catholic faith. If that wasn't enough, the one person in the president's inner circle that Elijah can trust, the influential World Court Judge Anna Benedetti, reminds Elijah of his own former wife (whose life was cut short by terrorists) and he fears he is falling in love with her.

But through prayer and the celebration of the Eucharist, Elijah regains his resolve and vocation, and when Benedetti (who now has also gained respect for Elijah's celibacy) uncovers and records the president's diabolical plans for global domination, the world appears safe once again. Safe, that is, until the president's men kill Benedetti, and a cardinal-turned-traitor punches out the pope and steals the documentation implicating the president, and Elijah is instead framed for her murder. God helps Elijah to escape the police and grants his priest one last chance to try to save the president's soul. With the aid of the Angel Rafael, Elijah gets passed dozens of guards and is able to preach the gospel to him alone, but after classic confrontation of good v. evil, the president opts to serve Satan, and the Lord whisks Elijah away to the desert, where He prepares him for the final battle.

The reason, I believe, that O'Brien's vision succeeds "as something more than entertainment" is the author's own faith in something more than himself. Believers getting raptured out of automobiles while their cars are left to crash into the damned may sound cool, but it all strikes me as a bit arbitrary. With his reliance on the Eucharist, which more than once brings Elijah from feeling "unwell" and "agitated" to a state of "calm" and "interior recollection" (FE pg. 263) O'Brien's words become "Flesh," and his characters go from two-dimensional to three. Because of this, miracles, which Flannery O'Connor objected to in Catholic fiction as a kind of cheating, come across in O'Brien's novels not as contrived plot devices, but natural for those living in the spiritual realm. Furthermore, the novel not only becomes literature, but a holy (and I would argue, necessary) guide to our present apocalyptic times because it is not a just a simple contest between saved and unsaved, but a true-to-life depiction of the very real struggle between grace and sin in everyman, whether it be the saintly Elijah, who has serious doubts about God's plan up until the final battle, or the diabolical president, of whom the book's pope says, "I do not call any man Antichrist while his soul hangs in the balance, while he is still free to choose the good" (FE pg. 65).

And, speaking of presidents, I would be remiss in mentioning that one of the main reasons for reading Father Elijah in the United States is the similarity between the book's president and our own man of (in O'Brien's words) "smiles and...lies," Barack Obama. Although O'Brien wrote these words as a warning before Obama was elected, O'Brien's assessment that "I doubt he is the long prophesied ruler of the world, but I also believe he is of the spirit of the Antichrist, probably one of several key figures who will be instrumental in ushering in the time of great trial," will only become graver (and Obama more Antichrist-like) if he gets re-elected. Not only has Obama strengthened the laws promoting abortion and euthanasia under his watch, but he has added laws ranging from the legalization of gay marriage to using our schools to promote condoms, premarital sex and textbooks which glorify the gay lifestyle as the equal to the traditional family. In other words, O'Brien's 1996 version of the end times is now not far from Obama's 2011 vision of America, and Michael's book will become even more prophetic if we leave Barack in power. 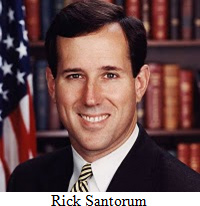 What, then, must we do? First, prove to the world that real Catholics do read, and get yourself a copy of Father Elijah. I guarantee you it's more entertaining than any TV series, and better than Fox News in preparing you for the apocalyptic battle ahead. Then, in between supporting true pro-life candidates like Rick Santorum (a long shot perhaps, but no more so than Fr. Elijah was), get busy promoting the upcoming "Father Elijah" movie to those who simply won't read anything Catholic or Christian. The screenplay is not by O'Brien, but it's being written by Anton Casta and Michael's son John D. O'Brien, certainly the next best thing. Pray that these young Catholic artists find entrepreneurs to distribute it widely and in time for the election, so that the novel and film not only ushers in a new era of Catholic art and orthodoxy, but a new day for the presidency. For after reading Father Elijah, you'll realize why when I say we can't afford this president for another term that I'm talking about more than just the economy.