Father,
the Holy Innocents offered you praise
by the death they suffered for Christ.
May our lives bear witness
to the faith we profess with our lips.
We ask this in the name of Jesus our Lord... -from the opening prayer of the Mass of the Holy Innocents

When Herod realized that he had been deceived by the magi, he became furious. He ordered the massacre of all the boys in Bethlehem and its vicinity two years old and under...[which] fulfilled what had been said by Jeremiah the prophet;
A voice was heard in Ramah
sobbing and loud lamentation;
Rachel weeping for her children,
and she would not be consoled,
since they were no more. -Matt. 2:15-18 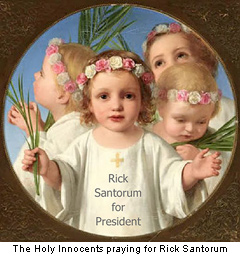 Early Wednesday morning (December 28), I eagerly flipped on the TV, only to find my man Rick Santorum stuck in fifth (or sixth) in the latest Iowa poll, behind Paul, Romney, Gingrich and Perry, and tied or slightly behind Michele Bachmann. By nightfall, Santorum (according to CNN) had surged into third with 16%, with Mitt flip-flopping ahead of the "mad" Dr. Paul. Of course, polls, with their small samples and margin of error, cannot be taken as gospel, but if Santorum's eleven-point surge since the beginning of December can be largely attributed to Rick's hard work, his nearly six-point rise in one day may be due to Augustine's second option.

As endorsements from prominent Evangelicals such as Bob Vander Plaats gave Santorum a big mini-boost, being chosen by newspapers such as the Oskaloosa News (with small but loyal followings) kept the rise slow and steady. In giving their "hands down endorsement," the paper praised not only Santorum's policies but his availability. From the time they first met Rick (and noted the close bond within the family) when he was serving pie at a Kiwanis shelter with his wife and children, to after the last TV debate when, while most of the candidates beat it to the national media's "spin room," but Santorum stopped to talk to them, "[h]e consistently made time for the little guys like 'Osky,'" echoing the feeling of a lot of folks in Iowa.

Also the sudden flocking of former Huckabee supporters, including the founders of "Huck's Army," the tireless twenty-three year old twins, Brett and Alex Harris, didn't hurt either. Brett's claim that "Rick has the same dark horse potential as Huckabee did in '08," confirmed the hopes of many Evangelicals, while brother Alex's dynamic speech "Now is not the time to settle for second or third best — not when we have a candidate like Rick Santorum!" galvanized them. But what was so special about Wednesday?

Before we go to the mystical factors, I'll start with the usual suspects. I thought Santorum's appearance on nationally syndicated radio host Michael Medved's program that day went particularly well. After an extremely cordial exchange, Medved, while not completely backing away from his statement that Mitt Romney had, considering both his resources and moderate conservatism, the best chance to beat Obama, agreed it was a good thing for social conservatives to converge around Santorum, and later even hinted at a possible Santorum upset. And speaking of radio, Wednesday also marked the debut of Santorum's Iowa radio ad, a positive spot that highlighted Santorum praise from everyone from Sarah Palin to Rush Limbaugh before concluding with the call for "all conservatives to unite" around him.

But perhaps just as important as Santorum's positives were the negative factors involving the other Christian conservative candidates. Rick Perry (whose ink-black new dye job actually made Romney's Grecian Formula look good) ran a tired TV spot linking Santorum and Michele Bachmann in with the "Washington insiders" that probably backfired on any informed Iowan (in other words, those likely to caucus), for as Bachmann (who countered by calling Perry the king of "crony capitalism") correctly stated, "it's not just being in Washington, but what you do there that matters." Still, as bad of a day as it was for Perry, December 28 was a downright disaster for Bachmann.

To me her downfall started earlier in the week when Iowa Republican.com's Kevin Hill confronted her with her earlier blanket statement in Des Moines that abortion (in this case, partial birth abortion) was a "states issue," in contrast to her earlier pledge to Personhood USA in which she vowed to fight abortion at both the state and federal level, and "She dodged the question. Twice." Caught between a "tea party" and a fetus (or between states rights and "inalienable rights") Bachmann didn't want to alienate either fiscal or social conservatives, and her 100% pro-life stance suddenly looked lifeless. But just as Bachmann spent the day desperately warning all the once-wavering Iowans now coming over to Santorum they must instead support her because "Santorum (who by the way sponsored the federal law banning partial birth abortion) can't win," that night she lost her campaign chairman (if not her campaign) as Iowa state senator, Kent Sorenson, defected to, of all people, the diabolical Dr. Paul. Whether or not Bachmann's claim that Paul paid Kent off to leave her is largely academic. The real moral of the story is that if a candidate lives by the economy driven tea-partiers, then she must also die by them.

But was there more to Rick's rise than what meets the eyes, an army at work other than the remnant of Huckabee's? December 28 also marks the day Catholics celebrate as the Feast of the Holy Innocents, honoring those young souls whom Herod slaughtered in his failed attempt to slay the Christ. Catholics think of the Holy Innocents as the forerunners of those souls slaughtered by the modern scourge of abortion, and ask their intercession to end this abomination. Call it the "FIT factor" if you will, but Fighting Irish Thomas (wishing to bear witness to the faith I profess) not only issued my second "Santorum forum" article (a tribute to Santorum volunteer, Wendy Jensen) that morning, but later that day reissued my "Blood of the Young Innocents" column on the meaning of the Holy Innocents, dedicating it to the efforts of a modern "wiseman," Rick Santorum. Meanwhile, my wife's "Silent Souls for Santorum" Facebook page was asking like-minded souls (on heaven and on earth) to pray a novena for the former senator, as well as answering the doubts of the skeptics who wondered if this simple father of seven (eight counting the Santorum's child in heaven, Gabriel Michael) had enough firepower to end the reign of the modern Herod known as Obama.

And so, if the intercession of the Innocents was partially responsible for Santorum's December 28 surge, it also showed that many Christians must continue to work and pray if this unlikely upset will indeed come to pass. The O'Tooles' prayers alone aren't enough; surely Jenkins' continued reign at Notre Dame (if not the Irish's debacle in the Champs Sports Bowl) is proof of that. Think of Santorum's December 28 surge as a sign; proving that although the ascendance of a committed Catholic to the White House is still improbable, it is far from impossible as long as we believe like Augustine and Rick, working as if everything depended upon us, and praying as if everything depended upon God.