He said in reply, "Have you not read that from the beginning the Creator 'made them male and female' and said, 'For this reason a man shall leave his father and mother and be joined to his wife, and the two shall become one flesh'? So they are no longer two, but one flesh. Therefore, what God has joined together, no human being must separate." -Matt 19:4-6

Therefore, God handed them over to impurity through the lusts of their hearts for the mutual degradation of their bodies. They exchanged the truth of God for a lie and revered and worshiped the creature rather than the creator, who is blessed forever. Amen. Therefore, God handed them over to degrading passions. Their females exchanged natural relations for unnatural, and the males likewise gave up natural relations with females and burned with lust for one another. Males did shameful things with males and thus received in their own persons the due penalty for their perversity. -Romans 1:24-27 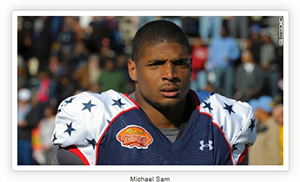 In the rough and tumble world of professional (and big-time college) sports, where until recently it was at least okay to be wary of gay teammates in the locker room, we now find that all bets of rational natural decency are off. First, when former University of Missouri football star, Michael Sam, declared himself "gay and proud of it," we found both politicians and athletes alike falling over themselves to sing his praises first. Then, after 35-year-old NBA journeyman Jason Collins (who previously received MSM hero worship last season when he was released from the Celtics and came out of the closet), actually got a gig with the New Jersey Nets recently, he received standing ovations in arenas around the league, surely the most acclaimed 10-day contract player ever in the history of the NBA. But while these men may indeed be heroes (even to devout Catholics!), it's up to Christians everywhere to point out to the young and impressionable, that they are being worshiped for the wrong reasons. 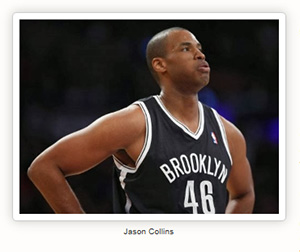 Getting back to my first point, with the secular deification of Collins and Sam, it seems that not only will a male Christian athlete get vilified as a homophobic if he objects to homosexuality in principal, he no longer can even question the place of a nude gay man in the largely straight guy shower. Since both Collins and Sam admit to being attracted to men, you would think it common sense that a straight man wouldn't want to show off the parts that gays are particularly attracted to, especially in close quarters. Does this also mean that if a college man is allowed to play on a women's sports team since that sport is not offered to men – also once thought wacky, but recent court decisions don't agree – that women are supposed to be accepting of his naked presence in the shower/locker room while they are also undressing? Fortunately, most female athletes I talked to still are freaked out over this potential invasion of modesty, but there's something fishy when the natural attraction to the opposite sex can be objected to in the locker room, but the unnatural attraction to the same sex cannot.

True, many people no longer call a same-sex union unnatural. Still, it baffles me when a Christian accepts gay sex, since on this subject Scripture is quite clear. As my lead-in quotes indicate, Christ always talked about marriage as between a man and a woman, and St. Paul, the Lord's hand-picked disciple to bring the Good News to the Gentiles, is quite decisive about this issue as well. But putting aside Paul's rather harsh invective on homosexuality to the Romans for the moment, let's examine his relatively mild admonition on immorality to Corinthians (as Duck Dynasty's Phil Robertson recently did to much liberal dismay) and see if we can see Paul's point – and that of his opposition.


When examining Paul's top ten list of those outside the kingdom looking in, two things immediately come to mind. The first of course is that, due to much conservative pressure, A&E reversed its course of dismissing Robertson, although it is still scary to think that Phil almost got fired merely for openly quoting the Bible. The second is that only one of these groups (guess which one that is) objects to being mentioned among the ten. Notice that adulterers or fornicators don't put up much of a fuss about their negative status, and the TGDS (thieves, the greedy, drunkards and slanderers) community isn't lobbying for positive press. In fact, thieves and robbers for the most part shun the spotlight, and drunkards are only hailed as heroes when they quit drinking. Which is precisely why the current positive position of active homosexuals, and society's acceptance of it, is wrong.

Once our secular society dismissed the notion of sin, it has become difficult for all but the committed Judeo-Christians to distinguish (especially sexually) wrong from right. The fact that some sexual perverts, rapists, child pornographers, are still considered dangerous, while adultery is still frowned upon and fornication at least is not praised shows that not everything goes (yet) sexually in our country. But the line concerning sexual morality is arbitrary – and retreating. Indeed, it is one thing to punish homosexuals for having sex, something no Catholic or Christian suggests. But it is quite another to praise them because they perform an unnatural act (notice no one is ever praised by the media for coming out as a chaste gay) which is exactly what our society is unwittingly doing.

As Christians, we must always be kind toward gays, and praise them for the good that they do. In Jason Collins' case, that he can bring comfort to Judy and Dennis Shepard (the parents of Matthew Shepard, the young man who was allegedly murdered for being gay) may be heroic – but his break-up with former WNBA player Carolyn Moos shortly before their scheduled marriage certainly was not. As far as Michael Sam is concerned, I consider much of what he has done thus far the very definition of a hero.

For Sam to overcome his parents' separation, to watch one older brother die from a gunshot wound, see two other brothers go to prison and another disappear, never to be found...is a lot to expect any kid to endure and not lose hope. Now add to this his sister dying in infancy, plus being homeless and living out of his mother's car, and Sam still being mentally tough enough to become not only the only kid in his family to attend college, but earn All-American honors in football, and that's about as heroic as it gets. Ironically, it is the one thing for which society praises him most – that is, being an active open homosexual – that is about the only thing for which he is not a hero. And that statement is not according to me or Fox TV, but to God and His Only begotten Son.

That is why Michael's descent is so tragic, for we see the rare heroism of a born leader being frittered away, a young man being deceived by everyone from the president on down into believing his sin is his glory, his shame is his fame. In the meantime, sports, once one of the greatest avenues for both molding and inspiring selfless young heroes, is now becoming just another venue for breeding and promoting selfish, shallow professionals. And that, my friends, is nothing to cheer about.