Victor Sharpe
Our Bill of Rights or the UN's human rights? 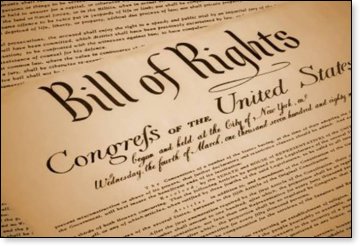 On December 15, 1791, the Bill of Rights became a fundamental part of the Constitution of the United States. Some two years beforehand, the representatives of the 13 colonies gathered together, but they were nervous because they well knew from the history of England and Europe that Kings and Parliaments arbitrarily take away the people's freedoms.

For this reason they insisted that some basic rights and freedoms be written into the Constitution so that no future government could ever take them away or oppress the citizens of the land: thus the Bill of Rights was written consisting of ten crucial amendments to the glorious Constitution.

On December 15, 2018 we celebrate the 227th anniversary of these important amendments that have proved so essential to the American political tradition. But the very Constitution is now threatened from within the United States. Our public education system is riddled with teachers, tenured professors and administrators who question its validity in these first decades of the 21st century.

Children come home telling their parents that, "in class today we learned about the Bill of Rights and what parts to change or cut out." We hear from these children that their teachers say it's too old or it was written long ago in 1789 and that a new one would fit today's world much better. Or that the teachers say the whole Constitution has really old ideas in it and its holding us back from being progressive.

Tragically our schools and colleges have become Socialist Conveyor belts churning out cookie-cutter little socialists who know little if anything of American history or the reasons why the Founding Fathers wrote the Bill of Rights in the first place. Let's take the First Amendment and its first right namely – Congress shall make no law respecting the establishment of religion.

In other words, the government cannot create an official religion or church or make citizens attend it. The memories of the horrific religious wars in England and throughout Europe were what motivated this part of the First Amendment. In England and Europe, religious wars were endemic with each nation's army calling upon their same Lord and Savior to give it victory. The 'Thirty Years War' from 1618 to 1648 led to unspeakable horrors of man's inhumanity to man and all in the name of which Church would be preeminent.

The Founding Fathers in America knew of such horrors. Their ancestors had fled to America's shores to escape from it. They wanted to make sure that in America there would never be such misery and division. Included in the First Amendment is the Free Exercise clause which prevents the government from interfering with how people worship. These unchangeable words of immense wisdom provide us with safety from oppression, but foolish folks today would abandon it to create a new dystopian world in the name of illusory progressivism.

The First Amendment protects freedom of speech and freedom of the press. We should be able to say what we want and publish or broadcast our ideas. But we all know that such enshrined rights are being circumscribed by the same progressive oppression known as political correctness – a sinister assault upon the First Amendment and a direct attack upon what the Founding Fathers wanted, which was to be sure that people were not punished or ostracized for what they said.

So called progressives (a cute name for latter day socialists and communists) would gladly dump the rights of freedom of religion, speech and the press as enshrined in the First Amendment. Instead, they would willingly embrace the grotesque human rights hypocrisy that the globalist United Nations foists upon the world.

TV News, for example, be it ABC, CBS, NBC, PBS, CNN, MSNBC – all have abandoned impartiality and objective journalism in reporting news. All are allies of one political party, the Democrat Party, and all are marching in lockstep in a vicious and unrelenting campaign of demonization of a duly elected president of the United States: President Trump.

The relentless attacks by these same progressives, many of whom now infest the increasingly leftwing Democrat Party, know that it is the Second Amendment which is their prime target because it keeps the entire Constitution and the Bill of Rights alive. Indeed, all rights are dependent on a strong Second Amendment.

" ... the right of the people to keep and bear arms shall not be infringed." These are the words that progressives would tear up as they take away our guns.

The United States had joined the travesty of the UN Human Rights Council in 2009 during former President Barack Hussein Obama's first term, and after the Council was established to replace the widely discredited earlier UN Commission on Human Rights. But this new Human Rights Council is fundamentally flawed from the outset for it fails to incorporate any meaningful criteria for membership and instead is led by – and subject to – control and manipulation by the very human rights abusers, such as Iran, that the Council was meant to expel and censure.

Taking the moral high ground, the U.S. recently removed itself from that shameful disgrace, which the morally compromised United Nations has foisted upon the world.

There can be no comparison between the towering vision of the Bill of Rights with the hypocrisy of the United Nations Human Rights Council, the UN General Assembly, or of that other oppressive organization: The European Union.

Fortunately the U.S, Australia, Israel and most East European nations have justifiably rejected the UN's Migration Pact, which is the latest assault by globalists on citizen's rights. The UN is not seeking colonization, but conquest. The citizens of nations who accept the pact will be slaves. The rights of "UN citizens" will supersede those of citizens in their own home countries.

The relentless attacks upon the First and Second Amendments – by the same progressives, so many of whom now infest the increasingly leftwing Democrat Party – know that, in particular, it is the Second Amendment which is their prime target because it keeps the entire Constitution and the Bill of Rights alive. Indeed, all rights are dependent on a strong Second Amendment.

" ... the right of the people to keep and bear arms shall not be infringed." These are the words that progressives would dearly love to tear up tear up as they take away our guns.

In conclusion we hear so often the insidious talk by progressives about "reasonable gun control laws." Americans should be terrified of that word, "CONTROL." After all, it was the favorite word used by Adolf Hitler and Josef Stalin and increasingly we now hear it used by the globalists in the UN and in the EU.