Joan Swirsky
Something terrible has happened to Michael

May 26, 2009
Imagine that you've learned in your local newspaper and on TV that a serial murderer is stalking and killing people in your community. Anxious and concerned for the safety of your family, you buy a gun.

Then your worst nightmare happens. Lying in bed and drifting off to sleep, you hear a loud sound downstairs  the unmistakable explosion of your front door being battered down and the menacing footsteps of an intruder climbing the stairs to your bedroom. You cock your already-loaded gun, and when the thug lunges at you, you shoot.

Now dead, he is positively identified as the man who murdered the other people in your town... and you are hailed as a hero.

You don't consider yourself a hero at all, but simply a regular citizen protecting his family. When polls are taken about what you did, 90 percent of people say they would have done the same thing, six percent say they would have "reasoned" with the intruder, and another four-percent said, "I don't know."

The contempt liberals and leftists have for physical self-defense is wedded to their rigid obeisance to non-violence. Last December, when my next-door-neighbor's 48-year-daughter and mother of three was gunned down in her own home in Missouri by two teenagers, her Leftist parents thought the solution to this kind of violence was gun control. When I told them that I wished their daughter had had a gun and "blown those thugs away," they said  in defense of their indefensible position  that "she couldn't have gotten a gun out fast enough." Huh?

But theory has no place in the real world of American soldiers who have volunteered to protect and defend our country and are faced not with neighborhood thugs but with Al Qaeda terrorists who have told the entire world that their Number One mission is to kill all the "infidels"  particularly Americans  who disagree with their Islamist agenda of establishing a Muslim-driven Caliphate of Islamic "law" in the Western world.

We saw this in all-too vivid action when 19 Saudi Arabian jihadists murdered nearly 3,000 people on September 11, 2001, in the World Trade Center Twin Towers in New York City. We saw this when we witnessed our enemies dancing in the streets as New Yorkers were burned alive or leapt to their ghastly deaths from the highest floors. We saw this as the stalwart defenders of American freedom were annihilated in the Pentagon, and as hundreds of innocent airline travelers plunged to the ground in Pennsylvania.

And we applauded the heroism of the men and women who immediately enlisted to fight this threat to our country, and continue to do so today. 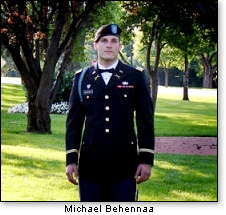 One of those volunteers was Michael Behenna, who heard the call in 2006 while attending the University of Central Oklahoma. From a prominent family of public servants  his mother Vicki is an Assistant United States Attorney and his father Scott a retired Special Agent with the Oklahoma State Bureau of Investigation  Michael arrived in Iraq in 2007 and quickly rose to the rank of First Lieutenant.

But there are rare instances in which a member of our military is punished for doing what he was trained to do  subdue or, if necessary, kill the enemy. This is what happened.

In May 2008, a known member of an al Qaeda cell, Ali Mansur, was suspected of having organized an attack on the young Army Ranger's platoon, which killed two U.S. soldiers and injured two more under Lt. Behenna's command. For some unfathomable reason, Army intelligence ordered that Mansur be released and ordered Lt. Behenna, who was then 24, to escort the terrorist to his home.

On the way, Behenna questioned Mansur in an effort to learn additional information about other members of the terrorist cell, as well as who was financing it. During the interrogation, Mansur attacked Lt. Behenna, who killed the terrorist in self-defense.

But instead of expressing relief that one of their own had survived the attack, the government cast Mansur as the "victim" and prosecuted Lt. Behenna for premeditated murder! The following timeline was taken, in part, from the website that has been established in support of Lt. Behenna  www.defendmichael.com  and confirmed by his mother, Vicki.

Lt. Behenna's attorneys are appealing the verdict. It is Vicki Behenna's understanding that the General of the 101st Airborne will review Michael's case in the next several weeks, in which case he can set aside the findings of guilt, order a new trial, or reduce Michael's sentence. After the General's decision, Michael's case will be docketed in the appellate court, a process that can take from one-to-three years for the appeal to be heard.

HOW COULD THIS HAPPEN?

There are those who believe that Michael was "sacrificed" for political reasons. Is it possible that the motive for failing to provide the exculpatory information had anything to do with our military's desire to be able to tell the Iraqi government that they had convicted an officer, the better to actualize some kind of quid pro quo arrangement or smooth over some ruffled feathers?

In my opinion, it's a miscarriage of justice for a soldier who is fighting for the Constitutional rights we hold dear  the right to due process and a fair trial  to be denied those rights in his own trial! And what about the demoralization this causes other U.S. troops, who continue to fight on behalf of the freedom and security of our nation? Whether they are U.S. border patrol agents, members of the armed forces, or FBI agents, no individual who is serving on the frontlines in the War on Terror should be afforded anything less than a fair trial.

The Behennas and their many supporters have mobilized to help Michael and they urge everyone to contact his or her elected official to make sure that justice is done. And because the government has limitless resources but they don't, they've established a Legal Defense Fund to help their efforts.

They've also promised to send a Defend Michael Wristband for any donation of $20 or more.