Joan Swirsky
"An overthrow of the government"

Once again, however, Fox's Megyn "hell hath no fury like a woman scorned" Kelly ambushed Mr. Trump by falsely stating that the Better Business Bureau had given Trump University a D-minus rating, when in fact its rating is, as Trump asserted, an A!

Here is the Better Business Bureau report, with an 'A' grade for Trump University. 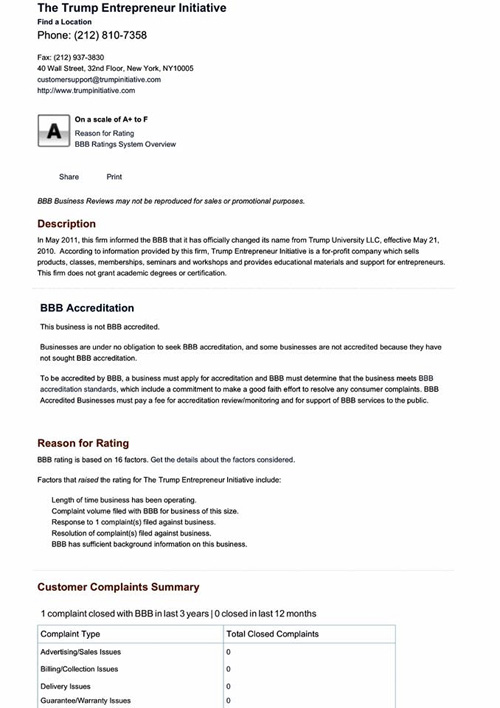 The same trouncing happened last week when Trump's victories in the primaries garnered him the lion's share of electoral votes by winning Alabama, Arkansas, Georgia, Massachusetts, Tennessee, and Virginia, which, according to Philip Bump of The Washington Post, "no Republican has ever won...going back to 1960."

Both pundits and pollsters attributed the massive turn-outs to Mr. Trump's having excited, inspired, and therefore mobilized the electorate – in some cases well over 100% increase above the 2012 midterms. In one instance, Mr. Trump beat Sen. Cruz by 450,000 votes; in another, he beat Sen. Rubio by over a million votes! According to writers Bill Barrow and Emily Swanson, Trump had "significant support across educational, ideological, age and income classifications."

In his victory speech last week, looking and sounding presidential, Mr. Trump accurately proclaimed: "We have expanded the Republican Party."

This ought to have been music to the ears of Republicans everywhere, especially "establishment" types who constantly seek to attract influential voting blocs comprised of African-Americans, Hispanics, and young people, all of whom – mysteriously, incomprehensibly, self-destructively – have huddled under the Democrat tent for decades, gaining not a micrometer of progress in their personal lives, wages, schools, crime rates, the pathetic list is endless.

Trump, only nine months into being a politician, has accomplished this incredible feat. But the more he succeeds, the more the Grand Poobahs of the Grand Old Party, as well as the media (both right and left), have devolved into what appears to be a clinical state of hysteria.

Think about this. Barack Obama's record violates every principle and value that Republicans and Conservatives claim they stand for. Under his watch, we have...
...and yet those same Republicans and Conservatives – in full control of the Senate and House – have been notably absent in mustering up anything more than mild rebuke to counter Mr. Obama's assaults on our country.

But to them, Trump is the real threat!

BATTEN DOWN THE HATCHES

That's what the frenzied GOP, media, and also-rans are trying to do, figuratively closing any openings in what they believe is their own personal Ship of State now that the threatening weather called Donald Trump is upon them. They are in a state of impotent horror, given their abject failure – in spite of multimillions spent and generous media assistance – to stem the Trump juggernaut.

Ironic, isn't it. If any entity deserves a comeuppance, it is the very arrogant, go-along-to-get-along, ineffectual, leftist-whipped, emasculated, cave-to-Obama, bow-to-the-lobbyists, accommodate-the-Arab-lobby establishment!

Impotent? Emasculated? Yes, money and power are mighty motivators, but it is a tacit acknowledgment of their own sissified selves that is now spurring Trump's critics into action.

And they're trying their damnedest!

On March 2, a gaggle of Republican national security leaders – no doubt many of them members of the globalist Council on Foreign Relations whose animating raison d'ȇtre would be threatened by a Trump presidency – wrote an open letter to Trump expressing their "united opposition" to his candidacy." They don't like his "vision of American influence and power in the world....advocacy for aggressively waging trade wars...rhetoric [that] undercuts the seriousness of combating Islamic radicalism...insistence that Mexico will fund a wall on the southern border...," on and on. Comical, isn't it, that everything they've failed to address with any seriousness or success compels them to slam the guy who promises to address those issues and succeed.

On March 3, 22 Republicans – including philandering Congressman Mark Sanford and the execrable Glenn Beck – declared that they would not vote for Trump.

August writers like the Wall St. Journal's Bret Stephens have been apoplectic about Trump for months, sparing no slur or invective. Author and military historian Max Boot has dug deep into his assault repertoire to make sure no insult has gone unhurled. And the usually dazzling Andrew C. McCarthy at National Review Online is simply unable to contain his hostility to Trump's candidacy, just as most of the other writers at NRO have jumped on the anti-Trump bandwagon. And that's not to omit the florid hysteria emanating from Commentarymagazine.com.

But no one forgot that Romney, a lifelong liberal, lost both senatorial and presidential elections and that the last image of him – etched indelibly in the American public's consciousness – was of him debating his rival for the presidency, Barack Obama, and simply folding like a cheap suit!

Romney – who The Wall St. Journal called "a flawed messenger" – didn't look or sound like he had dementia, so it's strange indeed that he barely mentioned the endorsement Trump gave him for his campaign for president, and the lavish praise he heaped upon Trump.

Romney's hit job evoked the following 22-word, devastating and well-deserved tweet from Trump: "Looks like two-time failed candidate Mitt Romney is going to be telling Republicans how to get elected. Not a good messenger!"

All of the abovementioned people – and dozens I haven't named – are growing frustrated that their old tricks of marginalizing and finally destroying the target in question haven't worked. They long to emulate the JournOlist of 2007, when over-400 members of the leftist media colluded to quash any and every criticism or fact-based doubt about Mr. Obama's constitutional eligibility to hold office, to intimidate any critic into silence.

To this day, has anyone seen even one of Barack Obama's college transcripts, his marriage license, a doctor's evaluation? Now it's the Republicans – actually those cocktail-swigging "conservatives" who routinely cozy up to the lobbyists they're beholden to – who have gotten together to defeat Trump. These feckless so-called leaders decided that their target, a self-funded former liberal, was worth more of their negative, insult-laden literary output and passionate commentary than the Marxist-driven, jihadist-defending, anti-constitutional, anti-American regime in power.

If you ever wonder how this could happen, why Republicans and self-described Conservatives could rebel so ferociously against a candidate who promises to strengthen our military, bring jobs and industry back to America, seal our borders against the onslaught of illegal aliens, and make America great again, wonder no more.

Doesn't it always come down to money? Money leads to power and influence and control, all of which politicians – that too-often pliable and buyable species – lust for. It's not only the ephemeral day-to-day power they fear losing, it's the entire network they're enmeshed in, which involves all the treaties and deals and "arrangements" they've signed onto and the pelf it promises to keep on yielding (for Exhibit No. 1, see The Clinton Foundation and the mountain of cash it reaps).

Imagine their fear of a president who actually cuts the pork, actually strikes deals that don't line his own pockets, actually exposes the bad deals that have been made by the bad players in Washington, D.C. Imagine what Trump will learn about the massive under-the-table, self-serving deals that were made in the Iran deal and others.

The same lust for power applies to media moguls whose wealth is not limited to TV stations and newspapers but to the very deals made by government and on Wall St. No one knows this better than Mr. Trump, the author of the mega-bestseller, The Art of the Deal. That's why his critics are so terrified. They pretend to be offended by the kind of comment or gesture that they themselves express routinely. But they're really afraid of being in the presence of someone who is utterly immune to either their blandishments or strong-arm tactics.

Roger Stone, a former advisor to Mr. Trump, told writer S. Noble at WorldNetDaily.com, that the perceived threat is so real that "The GOP establishment would rather suffer through four years of Hillary – whose policies are indistinguishable from Marco Rubio's or Mitt Romney's – than to have an outsider be president, like Trump who is beholden to no one."

As Mark Cunningham wrote in the New York Post: "All the noise about Donald Trump's 'hostile takeover' of the Republican Party misses a key point: Such takeovers only succeed when existing management has failed massively. And that's true of both the GOP and the conservative movement. Trump's a disrupter – but most of the fire aimed his way is just shooting the messenger."

Monica Crowley, editor of online opinion at The Washington Times, explains that the "emotionally fragile Republican ruling class" deluded themselves into thinking that Mr. Trump couldn't possibly win. "Then actual voting began. And the first-timer, the brash anti-politician, began racking up resounding victories...."

In addition, Crowley writes: "Like his style or not, Mr. Trump is an in-your-face guy. Voters want that kind of guy taking it to President Obama's record, [to] Hillary Clinton...and to the unbridled, destructive leftism that has rendered America virtually unrecognizable." And, I might add, taking it to the wimps in the GOP!

Former Governor Mike Huckabee told Fox News that Donald Trump's success represents a peaceful "overthrow of the government" and that the Republican establishment should be glad it's being achieved with "ballots not bullets." He added that the Trump phenomenon was a "political revolution in the Republican Party and in the country."