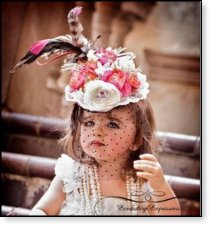 I have a vivid memory of putting on my mother's high heels and covering my head with the veiled hat she wore on special occasions. All decked out, I made my way up the Boulevard in New Haven to our neighbor's home about four houses away.

And on that sojourn, I have an equally vivid memory of a man sitting on his porch and stopping me in my tracks with his comments. "Well well well, Missy, don't we look pretty! And where would you be going today looking so beautiful?"

It was a single moment in time, but in that instant, I knew that it felt very good to be noticed and called attractive.

Where was leftist lawyer Gloria Allred all those years ago to represent me and accuse Mr. Porch Guy of sexual suggestiveness, intimidation, even harassment?

She was nowhere because even as a little girl I knew the following:
Of course, that puts me in the same category as the multimillions of people around the world who spend multibillions of dollars on cosmetics and clothing and hair and nail care for exactly the same reason – to appear attractive and by doing so to inspire people to smile at them, accept them, hire them, promote them, flirt with them, or approach them with romantic interest.

It's called human nature. It's hard-wired into our DNA. And it's been going on since the Garden of Eden when I'm sure Eve squeezed berry juice on their cheeks and lips and Adam bedecked himself with that famous fig leaf.

We've all heard about cockroaches crawling out of the woodwork. Today, every woman who crawls out of the Hollywood/D.C./media woodwork cries "victim!"

"I couldn't help myself," "He overpowered me," "It was so intimidating," on and on they bleat, complete with the dab-dab of the eyes to wipe away those manufactured crocodile tears, and to exhibit those oh-so-poignant catches in the voice – 40 years, 20 years, 10 years after the fact!

These are overwhelmingly Democrat women who describe themselves as feminists, whose vocabularies are suffused with words like "empowerment" and "equality" and that old leftist nugget "fairness," and who voted for Hillary because the woman who enabled her compulsively philandering husband for decades and vilified his accusers was some kind of role model to them. 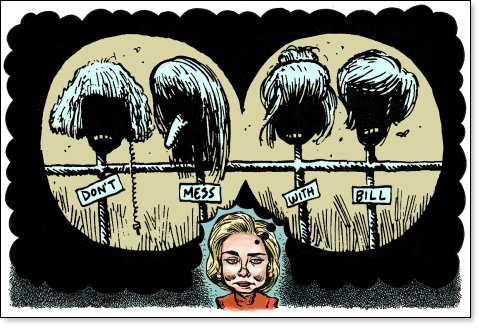 Yet, in case after case after case, not one of these emancipated, empowered, educated, upwardly-mobile women could find it within herself to set boundaries, express displeasure, or simply say no.

Of course, we all know why. They figured that capitulating was a relatively small price to pay for what they wanted – the movie role, the job, the pay raise, and being seen in the company of power.

And these are the women who sneer at prostitutes!

All of this is not surprising, given that the Hollywood/D.C./media crowd are dyed-in-the-wool secularists who have abiding contempt for religion and a downright blasphemous disdain of God. These are the moral relativists who can't seem to decide the difference between right and wrong, good and bad. "Who are we to judge?" they ask, as if their indecision is somehow a virtue.

Thankfully, I was raised in a religious home, where I was taught the clear distinction between right and wrong, good and bad.

As the years passed, I instinctively told any guy who acted or spoke inappropriately or offensively to get lost. No matter what they were selling, I wasn't buying.

While I married my high school heartthrob as a teenager, I never stopped receiving propositions, not only from ordinary guys in the supermarkets where I shopped and from doctors when I worked nights as an R.N., but also from many guys along the way.

My response was always the same: "Thank you for the compliment! But I'm happily married and not in the market."

The reactions to my rejections were uniform: gratitude that I interpreted their propositions for what they actually were, compliments, and understanding that I was not in the market. There is not one man I said no to who didn't remain my friend. 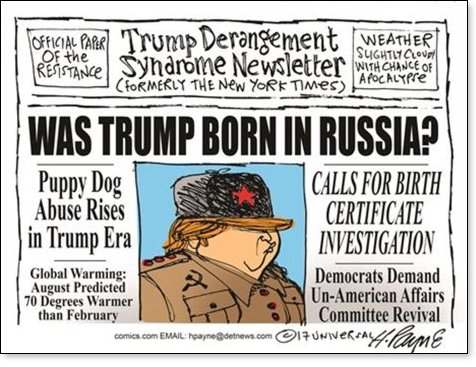 But the aggrieved women now coming out of their victim closets never said "thank you for the compliment but I'm not in the market" – because they were in the market!

They sold their souls for their ambitions – the movie role and promise of fame and fortune, the assurance of a promotion and raise, the guarantee of some longed-for ambition they believed only a powerful man could provide.

No doubt the psychotherapists in L.A. and D.C. and NYC have raked in millions "counseling" these "victims," but don't you wonder why all these women have so little self-esteem and such a startling inability to simply say no? It looks like almost 60 years of the feminist movement has failed them miserably.

Let's not forget that everything done by the left – that includes the media, elected officials, and the Hollywood set, as well as leftist Republicans like John McCain (AZ), Jeff Flake (AZ), Susan Collins (ME), Bob Corker (TN), Lisa Murkowski (AK), et al. – since the president started running for office in June of 2015 has been designed (1) to prevent him from being elected, and, failing that, (2) to get him out of office by manufacturing impeachable offenses. That is the left's entire raison d'être (purpose for living).

In President Trump, however, they have a target that cannot be bought or intimidated or compromised. In fact, it's fair to say that the predatory left has never met a politician – including a president – who had their number, called their bluff, and prevailed.

First they leveled the bogus charge that the Trump presidential campaign somehow colluded with Russia. Former FBI director Robert Mueller was in charge of the investigation – but oops! – all of a sudden, the investigation revealed that it was Hillary, her close associate John Podesta, former FBI Director James Comey, and others who had actually colluded with Russia on the Uranium One transaction that give 20 percent of America's uranium – the foundational ingredient in nuclear bombs – to Russia!!!

When this explosive news came out a few weeks ago – the stuff of genuine sedition and treason – it was again no surprise that the phony charge of Trump collusion with Russia vanished overnight.

But the America-loathing left – the liberals/progressives/communists/and jihadists among us – still cannot bear the cold hard empirical fact that President Trump was duly elected a full year ago and is now not only leading our nation to unprecedented prosperity, but dismantling virtually every anti-American regulation and statute and policy his predecessor of eight years put in place.

With the Russian-collusion fairy tale gone, they've struck on another strategy they hope will succeed in fulfilling their heart's desire to impeach the president: sexual harassment.

As long as they can get – probably pay off – enough women to swear they were so destroyed by this or that proposition, innuendo, leering eyeball, or touching offense, they figure they will be able to pin one of said "crimes" on President Trump.

The problem for them, of course, is that the president has been surrounded by the most beautiful women in the world for over 50 years – including the gorgeous contestants in the Miss Universe pageant, which he bought in 2015 – but was never once accused of anything remotely related to sexual harassment or misconduct.

Yet the pathetic left keeps trying.

Genuine conservative and former chief justice of the Alabama Supreme Court Judge Roy Moore became the target of a sexual misconduct claim when the candidate for the U.S. Senate (the vote is on December 12) was accused of making a sexual advance toward a 14-year-old girl when he was 32.

Immediately, the anti-Trump Senate Majority Leader Mitch McConnell – who clearly believes in the concept of guilty until proven innocent – called for the judge to abandon his candidacy. The judge refused and denied the claim. And then – ta da – up pops attorney Gloria Allred with another accusation, a signature for a high school teenager on a class yearbook that is already being challenged as fake.

Also popping up are a spate of hilarious jokes about the CA-based lawyer. Example...Q: How do you know a law client is lying? A: She's sitting next to Gloria Allred! 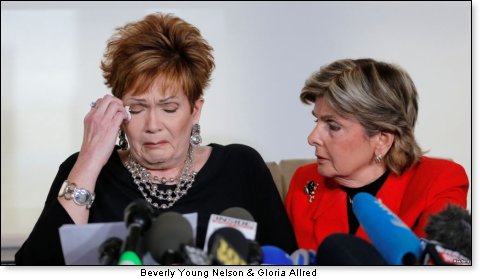 Joking aside, the left likes this type of besmirching. While conveniently forgetting that the casting couch was virtually created in Hollywood, they exult that the conservative and Trump-supporting cable powerhouse, the Fox News Network, booted out and heavily fined their late chairman, Roger Ailes, and one of its most popular and influential talk-show hosts, Bill O'Reilly, for sexual harassment.

It's not clear, however, if the left anticipated the floodgate of accusations toward mostly leftist predators – some of their biggest contributors and ardent supporters – that followed their own smearing of Judge Moore, but that's what happened: A Ben Affleck here, a Sen. Al Franken there – complete with a creepy picture of the unfunny lecher literally grabbing the breasts of a sleeping model.

But sacrificing Al Franken is small potatoes to the powers-that-be in the anti-Trump Deep State if they can snag the really Big Fish they've set their sights on.

As for the tens, then dozens, and probably hundreds of women who are magically confessing their long-buried angst at this particular moment in history, I say boo hoo.

If you didn't have the character or courage or moral discernment to call a wrong a wrong when it was taking place, don't expect sympathy years later when it appears that all you're doing is jumping on a lynch-mentality bandwagon.

If you didn't come out volubly and convincingly against the immoral predations of Bill Clinton and in support of the many women who claimed harassment and even rape by him during the '90s, don't expect sympathy years later when your grievances all point to rabidly partisan politics.

Is that what you're teaching your daughters – to compromise their values, to abandon right for wrong, to wait until someone else does the right thing before taking action?

And you want America to take you seriously?! Puhleeze!