February 6, 2018
Once upon a time, a seasoned political operative ran for President of the United States against a candidate who had virtually no political experience. 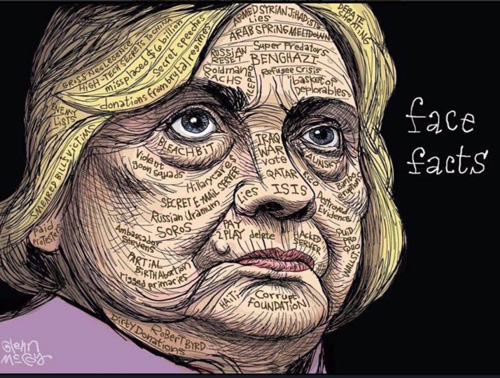 Her opponent – Republican Donald J. Trump – the billionaire builder who lived in the American version of the Palace of Versailles in Manhattan and in several other resplendent homes around the country and the world, who hosted two wildly successful TV shows, who owned casinos and built golf courses and was a favorite of tabloid magazines, and who had been lionized and courted by the Hollywood crowd, the media whores, and both Democrats and Republicans for his generous contributions, was the clear loser.

Ha ha ha sputtered the political experts. The idea that this neophyte, this (pardon the expression) capitalist could go up against a representative of the outgoing Big Government regime – which brought us socialized medicine (Obamacare) and socialized education (Common Core) and 94 million unemployed Americans and strangulating regulations and horrific trade deals and a foreign policy that bowed deeply to our enemies and spat in the faces of our faithful allies – well that just struck the experts as preposterous.

With the powerful Clinton Machine behind her, the endorsement of the outgoing faux "president," the immense help of rigged-election experts like ACORN, the incalculable assistance of a bought-and-paid-for leftwing media, and the good-old-reliable votes of feminists and blacks and Hispanics and gays and all the other groups that stupidly believe Democrats have helped them over the past 60 years, Hillary had no competition at all.

The cocky Hillary supporters believed that millions of deplorable Americans failed to notice their candidate's frequent coughing fits, the help she needed simply to ascend three stairs, her peculiar head-bobbing spasms, the cringe-producing effect of her strident voice, and her frequent absences from the campaign trail, not to mention her promising more of the same socialist-cum-communist policies that had failed so miserably for the previous eight years.

They also failed to realize that her opponent had hired an extremely savvy pollster.

That pollster told candidate Trump, on a daily and sometimes hourly basis, how Americans throughout the country were responding to his America First message. And it was all good. And it was a secret that the entire Trump Team kept to themselves.

Or so they thought. But the information that was so damning for Hillary's candidacy apparently reached the corrupt upper echelons of Obama's Federal Bureau of Investigation (FBI) and Department of Justice (DOJ), and scared them enough to hatch an illegal, seditious, unconstitutional plot to derail the Trump candidacy and, failing that, the Trump presidency.

For months on end, fake polls, as reported by fake news shills, told us that Hillary was a slam-dunk. Right up to 8 p.m. on the night of November 8, 2016, when the entire leftwing media started to wipe the volley of egg yolks dripping down their faces.

TRYING TO BRING DOWN A PRESIDENT

To those of us who supported Mr. Trump from the beginning – I wrote an article back in 2011 entitled "Trump is already running the country" – it was clear that every now and then in American history, someone comes along to save our country from those who hate it.

FDR is in this category, bolstering America's spirits through the worst Depression in our history and a devastating World War (although I personally revile Roosevelt for condemning six million Jews to annihilation when he could and should have bombed the concentration camps in Germany and Poland to which Hitler condemned his defenseless victims).

Abraham Lincoln is in this category, miraculously uniting our country after the ferocious Civil War that almost tore it apart.

President Trump belongs in this category, dramatically accomplishing more that is good for America in one year in office than any chief executive in our history – all while the clinically hysterical liberals in the media and among the populace continued to beleaguer, hound, protest, vilify, insult, and harass him, and ill-intentioned actors from Obama's DOJ and FBI put their malevolent plot into action, a plot that accused both candidate and President Trump of colluding with Russians to swing the election his way. 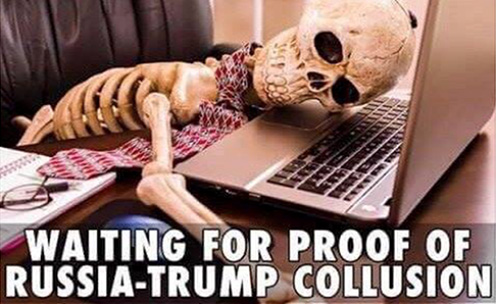 To this malicious end, they did the following:
WHAT'S MISSING FROM THIS PICTURE?

For well over a year, we've had the fishy FISA memo, former FBI director James Comey accused of covering up Hillary's crimes, the witch hunt of President Trump by former FBI director Robert Mueller, CA Democrat Adam Schiff's manic attempts to impeach the president, the media's narcotizing anti-Trump talking points, and the few lone voices – vox clamantis en deserto – in the conservative media, but what do they all have in common? What is missing?
While all of them pointed fingers, cast blame, or railed against the "system" they thought was crooked or biased or partisan, the elephant in the room – the subject they never raised, the person they never mentioned as the arch architect of the entire illegal corrupt plan to derail the Trump presidency – was BARACK OBAMA!

Does anyone really believe that FISA warrants can be submitted or obtained by any underling in the American government? Of course not! That request has to come – or at least be approved – directly from the Oval Office.

Does anyone really believe that the anti-Trump talking points, rallies, vigils, disparaging articles, and orchestrated hatred are spontaneous? Of course not! They come directly from groups like Organizing For America, which was formed by the former community organizer Barack Obama with the express intent of dismantling traditional American institutions and converting them into the socialist and communist regimes they most admire.

According to journalist and author Paul Sperry, Obama sent a message to his "troops" saying that he "was heartened by anti-Trump protests. Yes," says Sperry, "Obama has an army of agitators – numbering more than 30,000 – who will fight his Republican successor at every turn of his historic presidency. And Obama will command them from a bunker less than two miles from the White House."

To their credit, a few people – so far – have cited Obama as a central player – probably the central player – in the Russian-collusion fiasco. As CanadaFreePress.com editor Judi McLeod has written, "One day after the release of the Memo, we should all be asking, 'Where is Obama?' Why is he so stonily silent...? The answer is that the scurrilous Obama, just like Steele, went into hiding. The Memo proves that the FBI is not just part of a USA intelligence apparatus that systematically spies on its own American citizenry, it paid...for filth completely made up by a foreign agent with whom they were in tight 'Hate Donald Trump' league."

Daniel Greenfield, in an article entitled The memo reveals the coup against America, writes that "the Democrats and the media spent a week lying to the American people about the 'memo.'"..claiming its release would be damaging to America's spying and even treasonous. But "they didn't mean American spying methods – they meant Obama's spying methods."

"The memo isn't treasonous," Greenfield continues. "It reveals a treasonous effort by the Democrats to use our intelligence agencies to rig an election and overturn the will of the voters. Today, the media and Dems switched from claiming that the memo was full of 'classified information' that might get CIA agents killed to insisting that it was a dud and didn't matter. Oh what tangled webs we weave when first we practice to deceive." 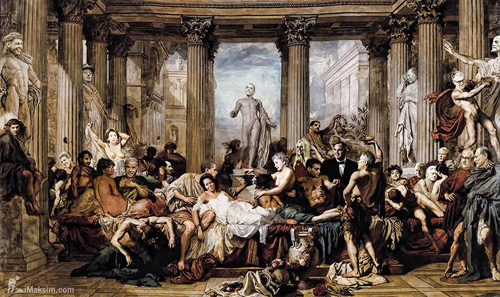 But where are the other voices to identify the virulence – and jealousy – of the anti-Trump minions? And particularly Barack Obama's role?

As I wrote in a former article, "James Comey and the stinking fish factor" – "Whether it's in industry or the military or sports or show business, if failure occurs, it's always the top dog who is accountable. Not the assembly line worker or the buck private or the third baseman who calls the shots, but the one who occupies the ultimate seat of power. Look at what happened at the Democratic National Committee...the Chief Executive Officer, Chief Financial Officer, Chief of Communications, and Chairwoman all resigned because of the hacking that proved the DNC to be both crooked and racist."

So it is with the putative head of the Democrat Party, Barack Obama. And it's not just jealousy or ideology that drives his obsession – it's fear! All the honchos under Obama – John Kerry, Hillary Clinton, James Comey, Loretta Lynch, John Podesta, the list is long – as well as Obama himself, quake with dread that their own scandals, acts of malfeasance, controversies, and possible illegalities will be unearthed and come to light during the Trump years and they will all be frog-marched straight into Leavenworth...hence the mad quest to frame the president and get him out of office.

They should be afraid. And they should be remorseful for their shabby tactics and constitutional violations. But if Hillary Clinton is any example of the left's craven sociopathy – and I think she is the prime example – the American public can expect no apologies and no regrets, but rather the same evasions, deceptions, and lies that the Obama gang raised to an art form during his ignominious eight years in office.

In fact, not only is Hillary credited with creating the Russian-collusion fakery, but as writer Mark Tapscott so thoroughly documents, the Clintons have been using the FBI against their enemies for years.

It is doubtful that when candidate Trump promised to "drain the swamp," he had even an inkling of the vast number of slithering, predatory, reptilian creatures who inhabited that toxic environment. But being the smartest guy in the room, and a quick study at that, you can bet that he will decontaminate the place as swiftly as he pushed through the biggest tax and jobs bill in history.

For that, he will gain the eternal gratitude of the American people, a huge majority of the candidates he endorses in the midterms, and a thunderous reelection in 2020.