Joan Swirsky
Democrats exposed as the racists theyve always been

They say that out of every bad thing comes a good thing. Ask any mother who has been through a 20-hour labor!

The same can be said of the criminal behavior of the Marxist-inspired radicalsAntifa and Black Lives Mattersthat eclipsed the legitimate outrage following the horrific murder of George Floyd by a white policeman, Derek Chauvin, in Minneapolis, MN.

This crime called for reform of the Minneapolis Police Department, which had ignored 18 grievances against Chauvin. But that is not what happened.

Instead, the peaceful protests against this savage act were obliterated by the professionally orchestrated, bountifully financed rampage of the above-mentioned anarchists (writ: terrorists) through American cities and suburbs, leaving a massive swath of destruction that included dozens of black-owned businesses and dozens of white-owned businesses that employed black citizens. So much for Black Lives Matter! 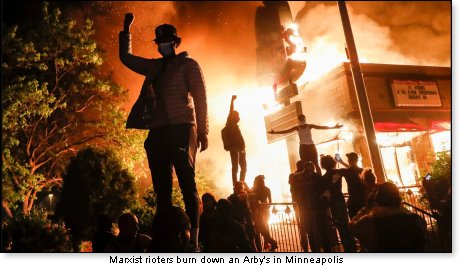 What a beautiful tribute to George FloydGod spare all of us such a memoriam!

However, the good that came out of this disgraceful, destructive, criminal behavior was the willingness of many black conservative commentators and writers to tell the American public what Democrats and their leftist media lackeys have been concealing from the public for decades:

John Nolte asks what the following cities have in common:

Here is but one example: 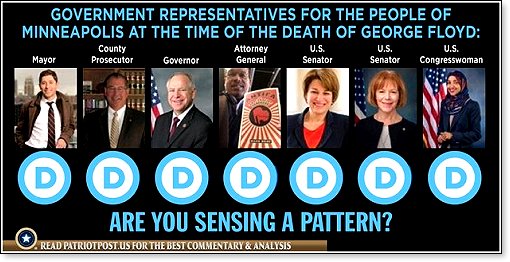 Make no mistake: all of the above actions were taken with one overriding goal in mind: to accumulate votes for Democrat candidates. The strategy was obviously to keep minority populations dumb and dependent, the better to convince them that hope for a better future lay right around the corner.

If you go to horrible schools, youre not going to keep up on politics and you're going to listen to sermon-spouting reverendslike Al Sharpton and Jesse Jackson and Jeremiah Wright, et al.who tell you what to think and who to vote for, while they are making millions and their gullible acolytes are barely getting by. So much for Black Lives Matter!

But now that President Trump enacted the unprecedented prison-reform First Step Act, and created an economy in which black people have enjoyed the highest employment rate in American historymoney in their pockets, unlimited opportunity, increased awareness of the slave mentality of the Democratswhich political party will this minority population vote for?

As I said, good often comes out of bad. A black vote of 20 percent, and quite possibly 30 percent, for President Trump, will teach the Democrats that even their most cherished valueabortionis not enough to keep the black population loyal to their historically empty promises and innate racism.