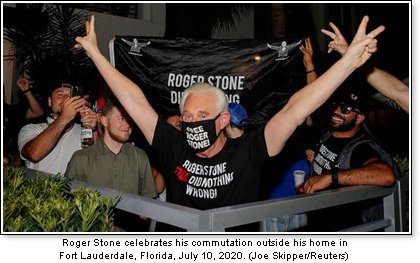 The Stone in the headline referred to Roger Stone, a longtime associate of President Trump who was sentenced February 20 to 40 months in prison for lying to Congress, among other counts, during the failed fiasco of the Mueller investigation into the non-existent collusion of then-candidate Trump with Russian operatives to rig the 2016 election in his favor.

Stone, now 67, was arrested in a predawn raid on his home by a heavily armed SWAT team, a saga that was coincidentally caught by a CNN camera crew who just happened to be parked outside his home at 4 a.m. Imagine that.

According to Jan Wolfe from Reuters, Stone had connections to the WikiLeaks website, which released damaging emails about Trumps election rival Hillary Clinton. Uh ohcant have those damning e-mails released. Hence the sadistically harsh sentencethe original recommendation was seven-to-nine yearsand the brouhaha about Stones commutation.

Of course, the leftwing media were outraged, shocked, and appalled at President Trumps miscarriage of justice, although interestingly the president didnt issue a full pardon, so the felony conviction of Mr. Stone still stands, as does his appeal.

But you would think, as reported by investigative journalist Mark Hyman, that he had just pardoned two-dozen FALN Puerto-Rican terrorists who murdered at least 24 people.

Or commuted the 58-year sentence of far-left terrorist Susan Rosenberg after only 16 years served. It is so consistent with her hate-America mindset that today, Rosenberg is a member of the board of directors for the left-wing group that handles the donations for the Marxist-front organization Black Lives Matter (BLM).

Or pardoned Marc Rich, who renounced his U.S. citizenship, traded illegally with Cuba, did business with Iran while it held 52 U.S. hostages, and with Libya, which was responsible for the Pan Am 103 bombing that killed 189 Americans.

Oops, that was Pres. Bill Clinton who did all this. Just before good ole boy Bill issued the pardons, Rich gave $450,000 to the Clinton Library and his wife Denise donated over a million dollars to the Democrat Party and the Clinton Foundation. Imagine that.

But there is more. According to investigative journalist Hyman, the 56 clemency petitions Clinton approved during his first term were the fewest of any president since Thomas Jefferson, the nations third commander-in-chief, who issued a mere 45 clemencies. Consider Jeffersons clemencies were given when the U.S. had a population of only 5 million compared to the 285 million during Clintons first term.

But everything changed when Hillary decided to run for U.S. Senator from New York. After her decision, Hyman says, Bill doled out 380 pardons and commutations. Clemency was dished-out in return for money, gifts, and influence. Hillary stockpiled financial and political IOUs and cashed-in when she ran for political office, including the presidency. Imagine that.

Again, not one word of outrage from the craven media. 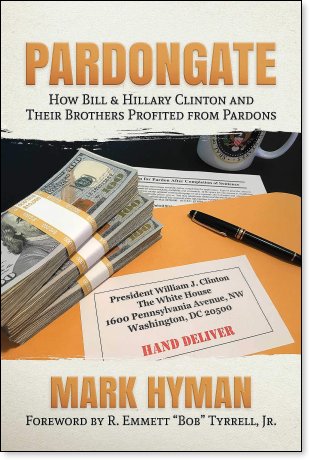 A FATAL ATTRACTION TO MISCREANTS

Many of Barack Obamas pardons and commutations were for drug dealers and violent offenders. He pardoned Chelsea (formerly Bradley) Manning, the traitor who leaked hundreds of thousands of sensitive documents to WikiLeaks and was convicted and sentenced to 35 years in prison. He pardoned convicted terrorist Oscar Lopez Rivera, leader of the FALN, responsible for 130 attacks in the U.S., who was serving a 70-year sentence when Obama set him freethe list is long. That is the very, very short list.

Remember the medias indignation? Me neither.

But Stones mortal sin was that he lied toguess who?the proven pathological liars in the Obama regimes FBI, CIA, and DOJ, who were trying to frame candidate and then President Trump. Nothing less than the guillotine for him!

Well, whaddaya know? The entire uproar is already off the radar as the corrupt media are now back to:

ARE THE TABLES TURNING?

The vast American public out there already knows of the Democrats double standards.

They see the breakdown of law and order in Democrat-run cities and its encroachment into the suburbs and dont want any of that wanton violence in their state, city, or neighborhood.

Even Regressives are horrified by the No-Bail laws enacted by Democrat legislators when they see that the psychopathic criminals who are setting cars on fire and committing violent assaults walk free, as did the thugs who attacked and injured high-ranking police officials in NY City the other day. 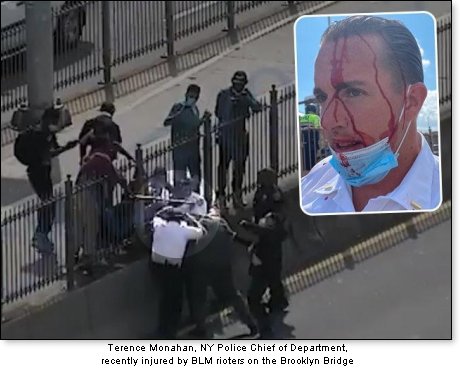 And they are watching Joe Bidens rapid and pitiful devolution.

On the positive side, President Trump is opening up America and, happily, the Democrats themselves are now waking up! According to an article in the New York Times, Two-thirds of battleground state voters who chose Trump in 2016 but selected Democrats in the midterms say they will return to the president [in 2020].