December 11, 2008
Barack Obama's upcoming presidency gives many reasons for conservatives to be concerned. All the more reason that we stick to substantive provable issues, as opposed to chasing such illusive rainbows as his alleged lack of a birth certificate.

Yes, I used the word "legitimate." This column roundly rejects the notion that anything that contradicts official findings on anything is ipso facto an absurd "conspiracy theory" and thus to be ridiculed before "moving on." That is naiveté or self-delusion. There are people to whom it is an article of faith that there are never never ever ever any conspiracies of any kind, period  and that your government would never lie to you and there are no cover-ups.

Anyone who views government goings-on through that telescope might as well prepare for the Easter Bunny and the tooth fairy. It is hard enough to convince people that real evidence supports a belief that (1) Vince Foster was murdered outside Fort Marcy Park; (2) former soldiers for Saddam Hussein's Iraq were complicit in the Oklahoma City bombing (about which this column has written); and (3) Flight #800 was hit by a missile of some kind. These conspiracies had one thing in common  a fanatical refusal by authorities to connect some dots that were staring them in the face, followed by vicious attacks on those who persisted in asking the unanswered questions.

Oh, yes, and don't forget that if there is no such thing as a conspiracy, then Nixon's Watergate was all just a bad dream, as were the Chinagate capers of the Clinton era.

However, pursuing the notion that Barack Obama is hiding the "fact" that he was born in Kenya and not in the United States appears to be a waste of time and resources needed to track the president-elect's every move because his coming era in the White House threatens dark days for the Republic. There's plenty of meat there. We should not be distracted.

As the world knows by now, the Supreme Court rejected without comment one of several lawsuits  in this case filed by a New Jersey man, Leo Donofrio, who argued Obama was ineligible for the presidency because the president-in-waiting had dual nationality at birth. His father was from Kenya, his mother from the U.S. Another challenge still awaiting court action (as of this writing) is from a Pennsylvania man, Philip J. Berg, who contends that Obama was born in Kenya, rather than in Hawaii as the Illinoisan claims.

Article 2 of the Constitution says, "No Person except a natural born citizen or a Citizen of the United States at the time of the Adoption of this Constitution shall be eligible to the office of President."

Let us dissect that:

...The second part of that alludes to the fact that the Founding Fathers became Citizens of the United States upon creation of this nation, but most had been citizens elsewhere  mainly Britain. Since no one is alive today who was "a Citizen of the United States at the time of the Adoption of this Constitution," that part of the eligibility standard no longer has any practical application.

...It is the first part that is relevant to this discussion. Some believe that the term "natural born Citizen" leaves itself open to interpretation. Alas, that is on a par with parsing the meaning of "is." "Natural born" refers to being a citizen by birth. Any other interpretation wanders into the silliness that perhaps there is such a thing as an unnatural birth. There is no evidence the Founders foresaw the advent of cloning. That of course is surreal.

"Down this road lies madness  I mean absolute madness," according to John Fund, columnist and editorial writer for The Wall Street Journal.

At a Wake-up Breakfast at the Leadership Institute, Fund cautioned: "There can be fear. There can be loathing. There can be concern about an administration. But if you let things go past the guard rails and start seeing things that aren't really there, you start worrying about things that aren't really there, you end up discrediting yourself and you make it harder for the rest of us who have legitimate concerns and legitimate lines of attack."

So why has Obama been so reluctant to reveal some things regarding his birth certificate? Fund says he thinks he knows, but he can't prove it. There are some scenarios which if true, might be embarrassing, but would not disqualify him from taking the oath of office on January 20, 2009, nor would they amount to much of an issue by the time he seeks re-election in 2012. But I can't prove anything on this any more than Fund can. If I could, they would be publicized.

Here is what we know

Hawaii's secretary of state has confirmed that Obama was born in that state. The law in Hawaii allows for a "certification of birth" in lieu of the actual birth certificate which includes some  though not all  of the information to be found on a full birth certificate. But the growing public challenges during the campaign persuaded the candidate to post a digitally scanned image of the full certificate. Not good enough for the skeptics, who called it a fake.

That tape of "Obama's grandmother"?

Philip Berg, the Pennsylvania man in the other case before the high court, says he has a tape recording of Obama's paternal grandmother saying she witnessed the birth of the future president-elect in Kenya. Berg, whose case has been tossed out of lower courts, has yet to make the tape public.

The Honolulu Advertiser published an announcement of baby Barack's reportedly local birth (in Honolulu) a few days after the birth in August 1961. Information as to the parents' names and address were included. To believe that he was born in Kenya, you would have to conclude that immediately after the baby's birth, Obama's parents, knowing that 47 years hence the child would be running for President of the United States, hurriedly rushed from Kenya to Honolulu with the newborn baby, and bribed hospital officials to give the information to the local newspaper so as to set up the hoax for 2008.

In the final analysis

All this would mean that  whatever inhibits Obama from going beyond what he has already discussed regarding this issue  it is not related to ineligibility for the office.

"Don't believe that," says Fund of the foreign-born allegation. "It's not true. If you go down that road, it's madness, and you'll discredit yourself in the eyes of many people who are fair-minded and will simply say, 'You just don't want an African-American to be president'"  although we should probably note that Donofrio also challenged John McCain's eligibility on the grounds that he was born in the Canal Zone at what was then U.S. military territory, but is now part of the country of Panama. That is also not valid.

Radical or opportunist: Which?

This column does not agree that pursuing this issue is "madness." The critics are sincere, but it appears they have failed to connect the dots. They have every right to pursue the issue. And when they hit a dry hole, most critics of the Obama administration will be satisfied, and we can advance to the substantive issues. 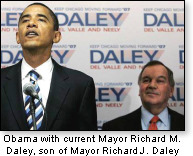 John Fund, who says he was the first to expose Obama's relation with the hard core socialist Saul Alinsky, says he believes the president, as a product of strong-arm Chicago politics  is more opportunist than radical because the Daley machine is more about power than radicalism. True about the Daley machine, but this column has yet to be convinced that for Obama, the lust for power and holding radical beliefs are necessarily mutually exclusive.

Certainly when you consider Obama's association with violent and off-the-charts radicals and the role of the Chicago machine in his advancement, it becomes ever more evident that this is not the Chicago machine of the late senior Mayor Richard Daley (the real Mayor Daley) who perfected the Chicago machine's ethically-challenged political culture, but eschewed ultra-left radicalism. That was nationally spotlighted during the Chicago riots at the time of the 1968 Democrat National Convention. Since those days, the two factions have patched up their differences. The ultimate nature of the machine that nurtured Obama's political career has once again been thrust to center stage by the Illinois governor's tape-recorded effort to sell the Senate seat vacated by Obama to the highest bidder.

Any way you slice it, we are not optimistic about the next four to eight years. We can always hope for the best, bearing in mind that hope does not by itself produce pleasant surprises.