April 12, 2010
The big question is: Will America's head soon be on the chopping block? The world is witnessing a road-map as to how America can be destroyed. 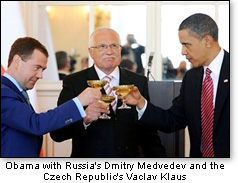 No doubt there is much chuckling at the highest levels of every terrorist state, every Communist state (large and small), and every other America-hating country or organization in the world. In President Obama's announced policy and in a newly signed treaty, the "bad guys" of the world are being offered what would amount to an engraved invitation to kill millions of Americans with chemical or biological weapons, or  if we are unrealistic enough to "whistle past the graveyard"  even with nuclear weapons.

When will they ever learn?

Mr. Obama has enunciated a major shift in U.S. nuclear security policy. There are problems with both his new Nuclear Posture Review (NPR) and with the related arms control treaty that he signed with Russia in Prague just hours after the Posture was announced. What leaves one speechless is that the United States policy slams the door on using nuclear weapons against non-nuclear states, even if they attack this country with chemical or biological weaponry.

What does it take to recall the lesson  learned many times over the years the hard way? You don't tell the enemy what you're not going to do if you are attacked (by whatever means). The prudent strategy is to leave all options on the table.

Our nuclear protection  on the way out?

America's much-maligned nuclear weaponry is the primary reason the Cold War remained (for the most part) cold  World War III was fought by other (tense but mostly peaceful) means. In the absence of that protection, the U.S. and the Soviet Union would have clashed militarily many years ago. The Obama administration seems prepared to roll the dice and toss that protection in the trash bin. We now know that the Korean War ended when it did because Ike made it plain he was prepared to use the ultimate weapon against the Communists fighting us. 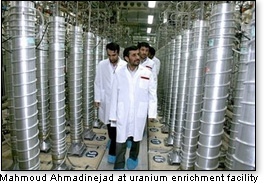 Now in 2010 under this new policy, the U.S. renounces the development of any new nuclear weapons. That would raise alarm bells for any normal people picked at random who are knowledgeable about Russia's history as a treaty partner, let alone Iran leader Mahmoud Ahmadinejad's threats, lies, and nuclear ambitions. Even the most casually informed person would not actually believe that Iran will stand down on its nuclear ambitions just because Mr. Obama won't build any new nukes for us. Can anyone  especially the President of the United States  be that naïve?

As was the case with the old Soviet Union, signing a nuclear treaty with today's Russia with loopholes (to put it mildly) should be a nonstarter. The idea that you can trust a treaty with untrustworthy people supposedly to join you in "making nuclear weapons obsolete" dangerously ignores basic logic. We've known this ever since the dawning of the nuclear age. The president ignores that history. Ironically, at the same time, he acts as if we're still in the Cold War arms race, rather than waging a War with Radical Islam  an accurate term our Commander-in-Chief actually has banned from official documents.

The treaty and the Posture policy  each standing alone, but especially when combined  have "the makings of a truly radical program that is going to result in many other very profound and dangerous things," according to Frank Gaffney  President of the Center for Security Policy (CSP).

The overriding "dangerous thing" is "the disarmament of one country  the denuclearization of just one country  and that is ours," Gaffney says.

In an interview with this column, Gaffney  an alumnus of the Reagan Pentagon  outlined several problems with START II (as it is informally called, even though there have been more than one previous START treaties).

1  It calls for "further deep cuts in the nuclear deterrent at a time when the rest of the world is building up nuclear capabilities. [True,] the Russians have agreed to make reductions, [but] basically they are reductions they were going to make anyway [but had delayed because of] their economic difficulties."

The upshot of that, according to the CNP president, is that "we're being induced to go to the same level as they have. Parity with the Russians  even if real  is not desirable under present circumstances. [That is] the Cold War paradigm. This treaty is a throwback to the Cold War [to the disadvantage of the United States]."

2  The treaty does not take into account the Chinese nuclear weapons program which is "feverishly being expanded," Gaffney points out. (The Chinese  not too subtly  have posited aloud a situation where it would be possible for them to hit Los Angeles.) Several writers have reported that Chinese nukes are pointed at U.S. cities.

3  The treaty, Gaffney reminds us, does not address itself "to the thousands of nuclear weapons  so-called tactical nuclear weapons that the Russians have, some of which we have reason to believe are on submarines that are pointing their missiles with warheads on them at our cities, with yields the size of the bomb that destroyed Hiroshima."

Gaffney concludes that "it's peculiar  not to say bizarre  that those weapons, which could have very real strategic implications, are simply set aside."

So even if the treaty is ratified, then what?

Russia in its old Soviet Union incarnation was notoriously observant of Vladimir Lenin's contempt for the solemnity of treaties, which he infamously likened to piecrusts  to be broken. That brings us to the question:

4  How verifiable is the treaty? Gaffney  at the time of our interview  had not seen "how they propose [to verify that the treaty is being faithfully observed by Russia]." The night before our interview, Gaffney  on his radio program  had hosted Paula DeSutter, another specialist whose professional national security credentials include positions with the Verification and Intelligence Bureau of the Arms Control and Disarmament Agency and the Senate Intelligence Committee. She too has serious reservations as to how the treaty would/could be verified.

As DeSutter put it: "I think that the objectives [of Obama policy] are good, but everything that we are seeing raises questions about whether we can come closer to that safer world or if, by weakening the United States' deterrent, we invite other countries to take action against us."

There is more  much more. But we are running short on space. We will continue this analysis of the double-barreled threat to our security  including further comments from our interview with Frank Gaffney  in our next visit. And we will preview the fight ahead in the U.S. Senate, which must ratify the treaty before it takes effect.