September 13, 2010
If you tried to help a "protected" Obama constituency, you had better hope that your best efforts didn't fail. The Gestapo will have you in its crosshairs.

This is not the Gestapo of the thirties-Germany variety so vividly portrayed by Hollywood long after the bright shiny black uniforms and man-sized flashlights of the SS became extinct and irrelevant. 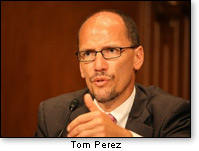 Perez's minions  sans black uniforms and man-sized flashlights (this is an "American" Gestapo, after all)  have "raided" Sheriff Arpaio's office, falsely charging his operation with "discrimination."

They can't prove that  especially since another federal agency  the Immigration Customs Enforcement Agency (ICE) had previously conducted its own probe of Sheriff Arpaio's office and found his officers "to be professional and meeting the requirement of the MOA" (Memorandum of Understanding). That included discrimination and racial profiling issues in dealing with illegal immigrants. That report from Byron York, who smoked out the ICE finding for the Washington Examiner.

So Perez's staffers  apparently charged with unearthing a "spitting on the street" violation if necessary  added the vaguely-worded catch-all charge: refusing to cooperate fully with investigators.

The outwardly "polite" gendarmes working for Perez admit they already have thousands of pages of documents they requested. Moreover, they were granted access to the sheriff's staff. 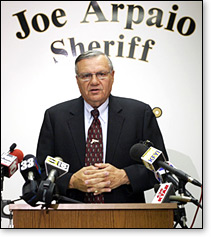 "They smiled in our faces then stabbed us in the back with this lawsuit," Arpaio told the Washington Times. "Now it's time to take the gloves off."

The Mexican Drug Cartel has placed a one-million dollar bounty on Sheriff Arpaio's head. There have been numerous death threats and actual plots against him, some resulting in convictions. The city of Phoenix (the county seat) is now number one in home invasions and kidnappings.

The criminals want to get rid of the sheriff via bullets. The Obama administration wants him out of there via ballots. That's the real reason they're aiming straight at him and they won't let facts get in the way.

Is butting into local elections a legitimate function of DOJ or of any federal office, for that matter?

There is a much larger issue at stake here  well beyond the fate of the sheriff  important as that is.

The man directing the Civil rights Division of DOJ has a history of trashing those who disagree with him. In his book, if you accept that some people are more talented than others, live longer than others, succeed more readily in their professional lives  if you accept all that, as most normal people do  then you are a bigot to be dealt with by the Perez Gestapo.

You see, Thomas Perez believes in interpreting "civil rights" by the "disparate impact theory." You may not intend to discriminate, but if  despite your best efforts  the end results show a disparity in such areas as test scores or mortgage lending  then it cannot be the result of anything other than bigotry. Never can it have anything to do with pure ability. 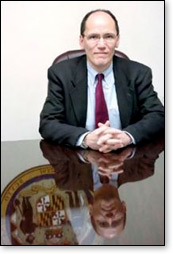 That kind of rationale (knowingly putting people in houses they could not afford) had much to do with the collapse of the housing market, which led to our worst recession since the Great Depression. But no matter. Commissar Perez  who prepped the investigators who swooped down on Maricopa County, Arizona  has a law of nature be damned view of the world.

It was my misfortune to have had Tom Perez as my County Councilman in Montgomery County, Maryland (suburban Washington, D.C.) from 2002 to 2006.

Mr. Perez was also President of the infamous Casa de Maryland. That pro-lawbreaking group crafted a pamphlet explaining to illegal aliens how they can avoid being caught. The organization has been funded by the likes of George Soros  the moneybags of the Hate-America Left  and by pro-communist dictator Hugo Chavez of Venezuela, whose oil company reportedly bestowed $1 million on the outlaw lobby. (Think about that if you're ever tempted to pull up to a CITGO station).

In 2006, Casa de Maryland threatened to protest at the schools of children whose parents favored enforcement of the nation's immigration laws. They followed up by going to Montgomery County schools to recruit the kiddies to join pro-amnesty protesters. The children were offered credits to join a Casa de Maryland march on Washington. (No brainwashing indoctrination here. Move right along, folks.) Our Montgomery tax dollars at work: Casa de Maryland also gets some public funding from the county.

In fact, Perez is a living, walking poster child for Montgomery County's having morphed (during my years living there) from moderate Republican to liberal Democrat to Looney Left.

Perez's efforts were instrumental in Casa de Maryland's opposition to efforts to keep illegals from obtaining Maryland drivers licenses. He also fought to obtain in-state tuition rates for those who committed a crime by crashing our borders in the first place. By contrast, out-of-state legal residents did not warrant Mr. Perez's tender concerns. They paid the full tuition. Indirectly at least, they  along with us Maryland taxpayers  paid the difference for the illegals.

The man is so imbued with partisan slashing and burning, he just can't help himself from spewing partisan hate when he's addressing a non-partisan or bipartisan audience.

Keeping it up on the federal level

At one point, Perez was in-house counsel to the late Senator Ted Kennedy, whose dogmatic rants were best illustrated by his vile "Robert Bork's America" speech wherein the Massachusetts Democrat willfully prostituted his senatorial privilege of immunity from legal action for blood-libel. Kennedy vigorously supported the mass crashing of America's borders.

There is no end to Thomas Perez's history of grab-grab-grab for all dictatorial powers necessary to force others to march to his orders. He reportedly is mulling over the idea of controlling the Internet and perpetrating  as York describes it  "a crackdown on Web sites on the theory that the Internet is a public accommodation." (What am I supposed to say about that? Come and get me, copper?)

Perez obviously relishes his power-grabbing job, having told liberal lawyers, "I am going to be calling each and every one of you to recruit you, because we've got 102 new positions in our budget."

How did Perez get his job? Aside from the obvious blend with the administration of the first American president who doesn't like Americans, the power-mad Marxist-minded Marylander was closely questioned at his confirmation hearings by Senator Jeff Sessions (R-Ala.). His answers were a textbook case of lawyerlike evasion.

At one point, Senator Sessions told Perez that he was "alarmed that you are painting with a very broad brush all those who stand for a lawful system of immigration enforcement 'xenophobes.'" Perez answered (unconvincingly) he was targeting another Montgomery County politician, not all opponents of illegal immigration. After some delay, with Harry Reid cracking the whip, the Senate confirmed him 72-22.

To look at his picture, if you didn't know any better, you would assume Thomas Perez was a benign nerd  maybe a mama's boy. Those who know about the real Thomas Perez will not be misled. He is imbued with deep intolerance for anyone who sees the world differently from his own view. And he has lots of your tax dollars at his disposal to see that you toe the line. He is a menace to freedom as Americans have come to understand it.