Wes Vernon
Prelude to dictatorship: next they're coming after your access to the internet

December 20, 2010
The rejected, tone-deaf leftists in Washington, clinging to their last hours of congressional power, have attempted (with mixed results) to do everything possible to strike back at the voters who dared to hand them pink slips last month at the polls.

The "lame ducks" have taken issues that are necessary to avoid tax hikes and government shutdowns, and larded them with outrageous pork. They succeeded with the bill in which — while kicking and screaming — they allowed job creators — most of them small businesses — to control investment money. But the discredited lawmakers failed when they tried to slather their wish-list of earmarks onto the bill that was aimed at avoiding a government shutdown.

Meanwhile, the radical Marxist move to increase government control of your life has continued apace in D.C.'s regulatory precincts.

Not just on Capitol Hill

Control freaks have been doing their dirty work in so many federal agencies that any attempt to resist is met with the metaphoric equivalent of a giant mowing machine. It is the Saul Alinsky "Rules for Radicals" formula played out at some of the most powerful levels of government.

December 21 is the darkest day of the year — literally and now figuratively.

That is the day FCC Chairman and Obama appointee Julius "Caesar" Genachowski — is set to issue sweeping regulations of Internet network management.

The two Republican commissioners are voting no, but the chairman enjoys a 3-to-2 Democratic majority and can get almost anything he wants from the current commission.

One of the dissenters — Commissioner Robert McDowell — says the proposed regulations — if unchallenged — would "upend three decades of bipartisan and international consensus that the Internet is best able to thrive in the absence of regulation," and "smacks more of coercion than consensus or compromise."

McDowell and the other Republican on the commission — Meredith Atwell Baker — have noted that the so-called "agreement" has been extracted not only in defiance of the courts, but of "a clear majority of all members of Congress," as well.

The voters not crazy about it, either

In the November election, ninety-five congressional candidates signed a pledge to support "net neutrality" (the Orwellian term applied to the FCC's over-reach). All 95 went down to defeat — every last one of them. But then burglars grabbing the last fistful of silverware before the home owners walk in on them don't worry about the niceties of public approval, either.

A warning from Congress

Thirty members of the United States Senate have signed on to a letter warning the FCC that its announced power grab will lead to a challenge on Capitol Hill. As the Washington Examiner observes, this would "provide insight into how Republicans, as [an expanded and more powerful minority in the 2011 Senate, intend to] leverage [outright GOP control] over the House of Representatives to hamstring attempts by the executive branch to rule by regulatory fiat."

Not only do the senators believe the FCC is pursuing what is bad policy, they question its very legitimacy as they write:

"You and the commission's general counsel have admitted in published statements that the legal justification for imposing these new regulations is questionable and 'has a serious risk of failure in court.' It is very clear that Congress has not granted the commission the specific statutory authority to do what you are proposing. Whether and how the Internet should be regulated is something that America's representatives in Congress, not the Commission, should determine."

Or to put it another way

Seton Motley, President of Less Government, has said it is possible to set up a "regulatory infrastructure" whereby it is policy to say, "Okay, we will react appropriately...if and when [real] net neutrality violations occur, and there will be a procedure in place [to determine] that they are legitimate violations and when there are, then and only then will we say okay, a net neutrality penalty will be in place. But to impose net neutrality on the entire worldwide web, in advance of any violation is an incredible impediment to investment."

Spot on. Investment would indeed be discouraged. One suspects, however, that is precisely what "Caesar" Genachowski — a Harvard Law classmate of his patron Barack Obama — has in mind.

This column — having spent decades inside the regulated media — is wary of even the modest changes Less Government is willing to tolerate. Give power-mad regulators an inch and ultimately they will get some politicians in black robes to grant them a mile. However, because of the tireless research Motley has done on this, we will defer to his judgment.

Just in case anyone misses the point, Motley adds: "If we allow him [Genachowski & Co.] to do this, next thing he'll come up and say, 'I'm going to regulate all the pizza joints in America. I'll just tell them how much cheese you can put on their pizzas, how many tables they can have, because you know he has just as much authority to do that as he does to regulate the Internet."

The short definition of "net neutrality" is it is a "solution" in search of a problem.

The longer definition is it means that no longer would allocation of Internet service be based on where the service is needed. Everybody gets an "equal" amount of mediocrity at best.

Under "net neutrality" that would no longer be allowed. No matter what you're doing, you cannot get any more or less bandwidth than anyone else.

As Motley explains it, "It's [like] telling the fire company, 'That guy's house is on fire. The guy next door is brushing his teeth. But you give equal amounts of water for both houses." 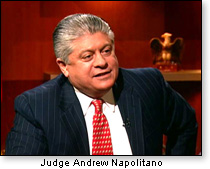 What this is all about

As Judge Andrew Napolitano said on Fox News, "The Internet is so free, so pure free market...."

Stop right there, Judge. You've just nailed it. That's why they want to control it. The powers that be in D.C. hate anything "free market" (except for those that allow themselves to be sucked into back-scratching deals with the White House). And they reserve a special hatred for an entity so near to perfection without any government sticking its nose into managing it. That is "unfair!" they argue.

But there is an overriding motive

This is just one part of an overall, concerted effort to banish conservative expressions of opinion from the public square. Marxists of all stripes have already made it clear they intend to shut down conservative talk radio, Fox News, and anyone who dares to dissent.

They intend to put the media open-expression genie back in the bottle. They want the media back where it was when there was almost no one to sass back the liberal orthodoxy peddled by the likes of the New York Times and the three big broadcast networks. They will tolerate nothing short of an outright propaganda ministry for the Marxist view of the world.

Their grab for the Internet is more "under the radar" than their quest for destroying their broadcast opponents. But it will be very much on your radar when everyone is offered inferior service on the web. That is a part of their drive for media uniformity. Much of this impudent assault is bankrolled by eccentric moneybags George Soros.

New Congress to the rescue?

Fortunately, Rep. Fred Upton (R-Mich.), the incoming chairman of the House Energy and Commerce Committee in the new Congress taking office next month, intends to haul Mr. Genachowski up to his panel for a series of hearings.

"We're going to be like a dog to a Frisbee on this issue," he promises. We can only hope.