March 14, 2011
There were some dramatic and silly moments at the congressional hearings on Radical Islam's war against America this past week.

Homeland Security Committee Chairman Pete King (R-N.Y.) deserves our thanks for getting the much-anticipated probe off the ground, especially given that his life has been threatened as he now has police protection — not at his request. 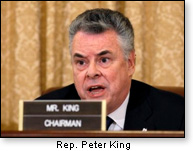 Of course, the usual clueless demagogues in Congress, whether or not intended, gave aid and comfort to the killers/self-appointed "soldiers of Allah" by taking potshots at King and witnesses who testified as to the threat our nation faces.

The chairman patiently tolerated the potshots, but moved forward. "To back down," said the tough Long Islander in his opening statement, "would be a craven surrender to political correctness and an abdication" of the committee's responsibility "to protect Americans from a terrorist attack."

In a world of normal people, the thought would not be — Let's investigate everything except the immediate threat. Rather it would be — How come, in the face of all these attacks around the world over the years, we still can't say who's attacking us?

Mr. King went on to cite the New York City subway bomber; the Ft. Hood murders; Colleen Rose, known as Jihad Jane; the Times Square bomber; the Mumbai plotter; and dozens of individuals in Minneapolis associated with the Somali terrorist organization al Shabaab — just for starters. "We cannot let the memory of that terrible day [9/11] fade way," the chairman added.

These and scores of other attacks are the work of real fanatics who mean to see that we all either convert to the most radical interpretation of political, cultural, and religious Islam, or perish. 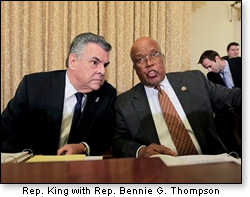 Rep. Bennie G. Thompson (D-Miss.), the ranking Democrat on the House panel, led the parade of useful idiots who think we dare not investigate jihadists unless we simultaneously investigate white extremist groups "that influenced [Timothy] McVey" in Oklahoma City.

Funny you should raise the tragic Oklahoma City bombing, Mr. Thompson. So let's re-open that never fully-solved murder of 169 innocent people. Let's get the FBI under oath about doing the interviews it never conducted regarding a Middle Easterner who (according to credible evidence) "influenced McVey."

Hussain alHussaini is the name of a man whose activities strongly indicating his collaboration with McVey have been ruled in court as "undisputed." If that name somehow lacks the ring of a "white extremist," it is because he was from the Middle East and named "The Third Terrorist" by intrepid reporter Jayna Davis in her best selling book. Want to go there, Mr. Thompson? And examine an apparent cover-up by the Clinton Justice Department? Oklahoma City was a warning covered up six years before 9/11.

Also testifying before the King committee was Rep. John Dingell (D-Mich.), the dean of the House. He warned against applying the broad brush. That is an implied slur against the scores of honest scholars and investigators who have taken care to distinguish between those observant Muslims (on the one hand) who confine their rituals to their personal lives and those (on the other hand) who are determined to inflict death on those "infidels" who won't convert. That sets up nearly every man, woman, and child in America as a potential target.

Dingell says he has had his own experiences in heading congressional probes, and that he always had a picture of Senator Joe McCarthy on is wall to "remind me of who I did not want to be."

Ah, yes! A none too subtle reiteration of an old hackneyed charge. Others who have studied the McCarthy hearings would see that picture as a reminder of what happens to public officials who go after enemies of this country, damning the torpedoes, full-speed ahead. (See this column's series on that subject in late 2007.)

And the silliness hits just keep on coming

That is always an easy hit when one seeks to divert attention elsewhere. For perspective, note that more Americans were killed by Islamist terrorists in just one day than were killed in over 100 years by the Klan, which rightly has been investigated many times.

But, hey, we can go down that road yet again. Maybe this time, we can examine which party created the KKK after the Civil War. Hint: There weren't any Republicans running the South in those days. You don't suppose we could review the background of a dedicated Klansman (a "Kleagle" no less) who rose to become a Senate Democrat leader in the late twentieth century? Hmm? Or what about Democrat President Woodrow Wilson, who had a private White House showing of a Klan-produced movie?

Ellison took a shot at Richard Nixon, another easy chestnut. Nixon's place in history is shameful, yet unrelated to today's Radical Islam.

The congressman from Minnesota was breathlessly informing us that when politicians compete for the same office at the polls, they tend to say some not very complimentary things about each other. Whatever one thinks of Nixon, there is no record of his having gone after Kennedy's Catholicism. Others did that, but not Nixon, who knew it would backfire.

Got that, Keith? And you say with a straight face this proves that in 2011, we have no grounds for investigating a worldwide movement that would kill Americans? That reeks of demagoguery!

Next on the silliness stage was Rep. Loretta Sanchez Bixby (D-Calif.) who really hates public mention of her last name since she uses only her maiden name so she can play the political Hispanic card.

That is not the only race/ethnic card Mrs. Bixby has played. Noting that her 2010 opponent was an Asian-American, she alleged "the Vietnamese and the Republicans" were trying to wrest control of her seat (italics added).

The congresswoman noted that Chairman King and others — including Dr. Zuhdi Jasser, a witness — had cited the poster by the Council on American-Islamic Relations (CAIR) advising its members not to talk to the FBI when asked questions in an investigation.

Mrs. Bixby noted some constituents had been approached at their homes by the FBI in an investigation at 8 PM, a normal hour for most people to be up and about. Apparently, Mrs. Sanchez Bixby believed an FBI visit should be timed during the day when the resident is not there. Either that, or question him at his place of work during business hours — embarrassing him and annoying his boss. It was left to Rep. Joe Walsh (R-Ill.) to wonder aloud, "What are they [CAIR] afraid of?"

Oh, and one more thing: Mrs. Sanchez Bixby's first election by an extremely tiny margin was marked by credible charges of fraud, including illegal voting by non-citizens.

Rep. Jackie Speier (D-Calif.) saw no warning signs in the testimony of Abdirizak Bihi, whose nephew was recruited by Islamists to fight in Somalia, then was shot in the head after refusing an order. Nor was she concerned when Michael Bledsoe testified about losing his son to Muslim recruiters. Upon being converted, the boy gunned down two soldiers outside a military recruiting station in Little Rock.

Congresswoman Speier said such "anecdotes" were interesting, but "unenlightening." That drew a smattering of applause from the "objective" media section — including a woman in a burka.

Biggest mouth of the hearing was Rep. Shirley Jackson Lee (D-Tex.), who made her point mainly by the sheer volume of her objections. She was so loud and disruptive that Chairman King had to gavel her down — which undoubtedly is the kind of made-for-TV chaos the Texas lawmaker had hoped to generate, an age-old Marxist tactic.

Small wonder Lee was voted "worst boss" on Capitol Hill. Examples: Nicknaming a staffer "You Stupid Mother---ker," screaming "stupid idiot" at a staffer whose visiting small-town parents were present; driving another staffer whose day and far-into-the-night work hours wore him down to the point where his doctor ordered him to quit, saying "It's your job or your life." Those small samples show a woman about as logical in interpersonal relationships as she is in analyzing America's murderous enemies.

Of course, there was more in the hearings, much of it covered elsewhere. Our humble contribution to public service is to shine the light on the caliber of cover-up artists who draw salaries from your pocket as they stooge for cut-throats who want you dead.