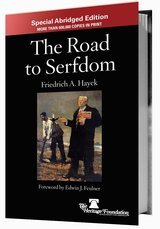 From the grave, one of the most honored economists of the 20th century warns America — and all of Western civilization — to be wary of the mirage-like temptations offered by so-called "democratic socialism." While many regimes have fallen for socialism's false promises, Friedrich A. Hayek lived to see the likes of President Reagan and Prime Minister Margaret Thatcher specifically credit his ideas for much of their own governances respecting the worth of the individual.

The Heritage Foundation has distilled Hayek's 67-year-old classic "The Road to Serfdom" into an "abridged" version that reads as if it had been written in 2011. His concerns of another era bear a remarkable resemblance to those of many Americans that their current president is taking them down a path that will ultimately lead to tyranny.

An excess of governmental planning, the Nobel prize-winning scholar writes, leads to dictatorship "because dictatorship is the most effective instrument of coercion and as such, is essential if [public-sector] central planning on a large scale is to be possible." For that reason, he prefers private-sector economic planning with a minimum of government interference. 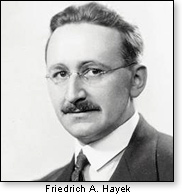 It is folly, Hayek warns, to assume that "if such [governmental] power is conferred by democratic procedure it cannot be arbitrary."

Such temptations often arise, "The Road to Serfdom" warns, from frustration with the failure of legislative assemblies to agree "on everything" and forge compromise "at each point," ultimately crafting a "scheme" that "in the end [would] satisfy nobody."

To draw up an economic plan this way, according to Hayek, "is even less possible for instance [than successfully planning] a military campaign by democratic procedure."

The Hayek prescience has a 21st-century relevance as the economist, who died in 1992 at age 92, writes, "There will be a stronger and stronger demand that some board or individual should be given powers to act on their own responsibility."

Here one sees a badly divided 112th Congress in 2011 resorting to a "supercommittee" to bridge the differences between those who support the economic ideology of what today's critics see as a far-left administration and those who want to return to the economic recipe advocated by a less intrusive government. That panel would not have been deemed necessary had elected officials not driven us into the indebtedness ditch by disregarding the economic freedom this book advocates.

Hayek's warning resonates through the decades: "A true 'dictatorship of the proletariat,' even if in democratic form, if it undertook to direct the economic system, would probably destroy personal freedom as completely as any autocracy has ever done."

The author delineates the relationship between wartime controls and a domestic economic formula: While "it is sensible temporarily to sacrifice freedom in order to make it more secure in the future," it is "quite a different thing to sacrifice liberty permanently in the interests of a planned economy." One recalls that at the end of World War II, Sen. Robert Taft was horrified that the Cold War would compromise an anticipated freedom-based postwar economy.

However, Hayek's support of private rather than public economic planning does not make him an advocate of a pure survival-of-the-fittest economy. He makes clear his own belief in what Reagan later would define as "a safety net."

"It is important," he writes, "not to confuse opposition to economic planning [by government blueprint] with a dogmatic laissez-faire attitude." Such freedom, says Hayek, does not preclude limiting working hours, certain sanitary arrangements and a system of social services that are "fully compatible with the preservation of competition." 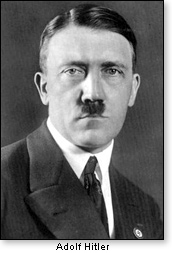 Hayek originally penned his warning in 1944, when two enemies of freedom, Hitler's Germany and Stalin's Soviet Union, were on opposite sides of a war in which the victor essentially would carry on the aggression from where the defeated left off.

Referring to pre-Hitler Germany, the author recalls, "The ease with which a young communist could be converted to a Nazi or vice versa was well-known. The communists and Nazis clashed more with each other than with other parties simply because they competed for the same type of mind and reserved for each other the hatred of the heretic."

The celebrated economist, whose writings have inspired several generations, reminds us that just as a leading government practitioner of "democratic socialism" will at some point "be confronted with the alternative of either assuming dictatorial powers or abandoning his plans, so the totalitarian leader would soon have to choose between disregard of ordinary morals and failure."

Friedrich A. Hayek saw that quandary as a major reason that "the unscrupulous are more successful in a society trending toward totalitarianism." Such choices describe "the gulf that separates totalitarianism from Western civilization," he contends.

Perhaps this abbreviated version of Hayek's work will serve to counteract contrary messages in many of America's classrooms.