No alliance — either worldwide or on our soil — is as under-reported as the collaboration between Communism and radical Islam.

Back in the eighties, on the old syndicated CBS Radio program Crosstalk, Benjamin Netanyahu, then Israel's ambassador to the United Nations, told me that the (then still existing) Soviet Union was behind much of the Middle East terrorism — a phenomenon which at that time had reached the American attention span when a terrorist radical Islamic movement overthrew the Shah of Iran and took 52 Americans hostage for 444 days. 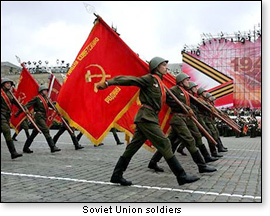 That the Soviet Union was instigating trouble worldwide was hardly shocking news. That was routine during the Cold War. But in his book and in the radio interview, the future Israeli Prime Minister outlined in detail the extent to which the Soviets were backing Mid-East terrorism to the hilt.

In 2012 — even with the Soviet Union itself gone — worldwide communism and radical Islam are supporting each other. The obvious cultural divide between the two in no way hinders this alliance of convenience.

The two-pronged threat to the U.S., Western Civilization, and indeed the world is forging ahead on all cylinders. Former KGB agent Konstantin Preobrazheny has explored and exposed what he alleges is "the hidden hand of the KGB" (under its new name in today's Russia) that is behind today's "Communists and [radical] Muslims."

Speaking to the July 19 conference of America's Survival, Inc., Preobrazheny described "Made in Moscow Terrorism."

"The Communists have considered Islam their ally from the very beginning," he said, "because in the early 20th century, Islam was [considered] the religion of the 'oppressed people.'"

Interestingly, Stalin (whose persecutions of every other religion in the Soviet Union were brutal, uncompromising, and without end) wrote this message for Vladimir Lenin to deliver to Russia's Muslims:

"From today, your beliefs, customs, your national and cultural institutions are free and inviolate. Organize your life freely and without hindrance." 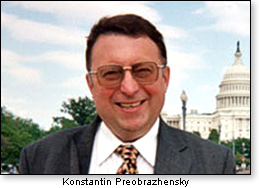 Konstantin Preobrazhensky reviewed how the Soviet Union helped Saudi Arabia to be born; how after World War II, Islam was used by the Soviet state; how Nazi Germany developed an active outreach to the Soviet Muslims headed by the former Grand Mufti of Jerusalem, who fled to Germany after the failure of an anti-British uprising in Palestine (this man was awarded the military rank of SS Gruppenfuehrer); and how many cultural activities in the Soviet Union "helped create the original varieties of Muslim civilization."

Recall the late Alexander Litvinenko, a former KGB agent poisoned in London in 2006 under suspicious circumstances that suggested the complicity of the Putin government in the deed (denied by Moscow, but not credibly refuted). Before he died, Litvinenko told Preobrazhensky that his former FSB/KGB colleagues trained famous al-Qaeda terrorists during the eighties. One of them has been responsible for the murder of U.S. nationals outside the United States. Another was a right-hand man of Osama bin Laden.

The onetime KGB operative cites British politician George Galloway as having explained that socialist/leftist movements around the world and radical Muslims have the same enemies, primarily "Western civilization in general and the United States and Great Britain."

"One can forecast that in the current situation, as leftists in the USA and other Western countries grow in influence, their alliance with the Islamists will be expanding," he warned.

In his introduction to Preobrazhensky, ASI President Cliff Kincaid noted that at the outset of the "Arab Spring," the Marxist-Leninist organization Popular Front for the Liberation of Palestine (PFLP) played a key role. The Muslim Brotherhood (which gained power in Egypt in part with a strong behind-the-scenes assist from the Obama White House) "gave rise to terrorist organizations such as Hamas."

Weather Underground terrorists (and pals of Barack Obama) Bill Ayers and Bernadine Dorhn participated in protests in Egypt in January 2010, at the time the "Arab Spring" campaign to destabilize Western-friendly Middle Eastern governments was about to gear up for its big push.

Prior to the conference, Kincaid conducted his own interview with Konstantin Probrazhensky in which he said — as the then-relatively unknown Netanyahu had warned in the eighties — that "Long before Islamic terrorism became a global threat, the KGB had used terrorism to facilitate the victory of world communism." Further, Probrazhensky told ASI that Islamic terrorism is a "child" of the old Soviet-sponsored terror networks, and that Russian involvement must be addressed by the U.S.

As early as the fifties

Robert Moss — author of The Spike, a Cold War novel (which many have claimed reflects real-life circumstances) testified before a Senate committee that as early as 1954, "the 10th Department of Soviet military intelligence, the GRU, drew up a plan to threaten Western access to Middle East oil." This was to be accomplished by penetration of the Arab world and alliances with radical movements.

All of which led to this statement July 19 from ASI:

"We believe the House Committee on Homeland Security chaired by Rep. Peter King should hold hearings on these matters. A new committee or subcommittee — specifically designed to probe Marxist organizations — needs to be established as well. There is enough work to do in regard to analyzing the international communist networks and radical Islam."

Obama supporters are pushing back with regard to the book The Communist, wherein a card-carrying Communist "mentored" Obama during his tender years and into his teens. Since we, in our last installment, focused on the book, we herewith present some objections by the book's detractors and the answers offered by the author, Paul Kengor.
And that is the author's response to those who would erase history, just as Obama has shelled out millions to hide years of his history.