October 28, 2013
When the Federal Election Commission (FEC) opened its doors 38 years ago, it drew a wary eye from those who feared the agency would end up as another taxpayer-funded political weapon for liberals to curb free speech they don't like.

Their fears may now be fully realized. It was Friday, according to Saturday's Wall Street Journal, that the FEC (created in 1975) welcomed its newest member. This particular member (sworn in Friday, October 25) has a history that would suggest an aversion to those who dare speaketh political views not to her liking.

We refer here to Ann Ravel, who has presided over what can fairly be described as a reign of terror in her position as chairman of California's Fair Political Practices Commission. (Hmmmm. Methinks that name contains a hint of classic Orwell.)

Hunting season is a year-round sport in California. Not for deer or rabbits – but for conservatives.

Whereupon, Finley concludes that in joining the FEC, Ms. Ravel "is taking that outlook nationwide."

She leaves behind as her signature ruling the imposition of a "record" $1 million fine on two Arizona-based conservative groups – Americans for Responsible Leadership and the Center to Protect Patient Rights.

What really irked the "no dissent allowed" sensitivities here is that those groups protected individual donors' identities from public disclosure. California makes donor anonymity almost impossible since the donations are directed to an online database, thus opening "free" citizens to public vilification and harassment.

This then is what the Golden State's former FPPC chairman brings to the table in Washington. Her use of a regulatory agency in the hot pursuit of "punishing our enemies" (Obama's openly stated vow) has obviously opened doors for her. As an appointee of the president, Ravel's "qualifications" in the fine art of the "enemy" hunt could not have impressed the president more if they had been written in bold letters on her resume. (Maybe they were.)

In our last column, I surmised that the FEC may have been chastened by push-back to the strong-arm tactics of Lois Lerner when she was there. Not anymore going forward. We are now on notice that the commission is moving "gingerly" only on a selective basis.

No doubt, publicity about Lois Lerner's stint at the IRS is fresh in your memory – i.e., singling out the Tea Party and other conservative groups for harassment, while letting millions raised by liberal organizations sail through with nary a peep (other than minimally for show). She took the Fifth, refused to testify before a congressional committee, and resigned in disgrace.

During that public IRS uproar, Al Salvi, a 1996 Illinois Republican candidate for the U.S. Senate, stepped forward and discussed how Lerner, when at the FEC, went after him over a personal loan he had made to his own campaign – which a judge later declared legal, but not before Salvi had spent $100,000 in legal fees.

Lerner put the screws to Salvi by offering to drop the charges against him if he would agree never to run for office again. Salvi gathered that Lerner was helping his opponent Dick Durbin to keep Salvi out of Illinois politics. (No! Really?)

Ah! But never let it be said that the FEC is always playing hardball. Take Templegate.

Actually we were behind the curve the other day when we dealt with this issue toward the end of our column on the smear tactics used against the Mike Lee's 2010 U.S. Senate campaign in Utah. 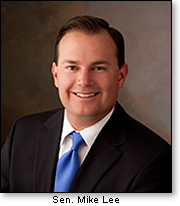 Ultimately, Lee was elected that year despite the phony mailer sent out claiming to be pro-Lee but actually backed by Tim Stewart, a former staffer for then-incumbent Senator Robert Bennett.

The flier portrayed Bennett as bereft of "Utah values." Lee was pictured standing in front of Salt Lake's Mormon temple while Bennett was shown before the U.S. Capitol. Obviously, that play on the religion card was crafted to make Lee look bad and generate sympathy for Bennett.

The FEC, in its wisdom, administered nothing more than a slap on the wrist to Stewart and Co., a fine adding up to the grand total of $1400. The Bennett partner was required to formally create a political action committee. Then, Stewart's ironically named "Utah Defenders of Constitutional Integrity" paid the fine. Beyond that, no penalty for Stewart personally, notwithstanding that three laws were broken: 1 – not registering initially as a political committee; 2 – not filing a disclosure report; and 3 – not including its contact information on the flier. You and I could have ended up in the slammer for that. But not Mr. Stewart.

Senator Lee says he's satisfied and as far as he's concerned, the matter is closed. Ex-Senator Bennett says he had no prior knowledge of the flier. It's credible that his friends would keep the veteran senator in the dark so as to provide him with deniability.

Others involved in the mischief included a Democrat Party strategist (No! Really?) and a Utah State University professor, Randy Simmons (possibly well-protected by ouster-free tenure).

Bennett and Stewart have now partnered in the creation of a consulting group. Stewart is well-connected through his 7 years on Bennett's Senate staff. His brother Chris Stewart (R) is a freshman congressman from the state. At the state GOP convention last year, several of Chris Stewart's opponents walked off the stage in protest of his tactics – not the least of which was an issue of truthfulness transcending the usual give-and-take in political warfare.

So what we have here is a government regulatory agency whose record indicates it has 1 – used its clout to try to muscle a Republican permanently out of politics in Illinois; 2 – applied what amounted to a sweetheart deal for a dirty trickster whose illegality was aimed at destroying the candidacy of a Tea Party Senate candidate in Utah; and 3 – sworn in as a new member a regulator who used regulatory authority to impose a punishment that could silence those with the "wrong" political views in California.

Excuse me. Did someone say this agency moves in a "gingerly" fashion? Depends on who's on the receiving end.