February 8, 2016
Beneath the breathless and largely substance-starved wall-to-wall coverage of the presidential debates lies the transformational crossroads of America's post-Cold War battle for its very survival. 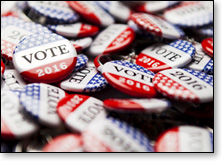 For one thing, "outside" movements on both sides of America's political divide (with different motives) are aiming for a new constitutional convention (on which we have reported several times in this space).

That is likely the most obvious sign that America is rapidly changing, and just as likely the very reason the mainstream media are ignoring it. If the prospect of toying with the Constitution should become widely known, the effort could backfire. An outraged public would be difficult for the left to head off. And make no mistake: the disenchantment would be on the pro-American side, not the camp of the Marxists, in and out of government, who have little use for this country.

Slowly but unstoppably, changes have been taking place whereby the political parties have uprooted, or are in the process of uprooting, roles and trading stands on issues, along with constituencies. Much of this simmering movement in domestic policies is, in this writer's opinion, likely to be at a full boil by the time votes are counted in the 2016 presidential race, or by the time the next president takes the oath of office.

Of course, one of the more flamboyant advocates of countering the Marxist-style or anti-American movements that have spread around the world and into American society in the 20th century is Donald Trump. Agree with everything he says or not, there is one certainty about the real estate magnet: he is a good showman whose talent has been in spotlighting and reflecting public anger and disappointment. He doesn't need to be more specific in his rhetoric. The unhappiness he speaks to covers a lot of issues. The one unifying factor is that Americans of different concerns generally agree that somehow their beloved America has gone off track. 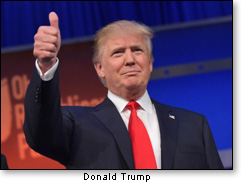 That may or may not corral enough votes for nomination or election on The Donald's part. Wherever you are on the presidential race, Americans have been looking for someone – anyone – to reflect their view that the basic real America they've known is slipping from them right beneath their feet.

And from both directions

About the time the Berlin Wall came tumbling down, both liberal Democrats and "establishment" Republicans heaved sighs of relief that the "reckless cowboy" Ronald Reagan was out of the White House – the Democrats were confident they could knock off his "moderate" replacement; and the Republican "donor class" was pleased that Bush '41 would be more malleable to the notion that the key to electoral security was to "go along" with the Democrats' march to the left.

On the international scene, there are indications of what America faces from the establishment both within and beyond our borders. Take for example, the World Economic Forum, where international political leaders, select "intellectuals," and journalists meet "to discuss the most pressing issues facing the world." Such camaraderie can result in constructive alliances (assuming they do not intrude on national security or sovereignty), but that does not always happen.

Into this heady atmosphere stepped Vice President Joe Biden. As quoted in a recent Pat Buchanan column, the VP warned the receptive elites at a conference in Switzerland that if the middle class in America and Europe were to secure a more prominent status, the result would be "fertile terrain for reactionary politicians, demagogues peddling xenophobia, anti-immigration, nationalist, isolationist views."

Those insults demonstrate precisely what generates the resentment for which Trump and others are providing a public voice.

Almost from the midst of the New Deal era, the GOP started minimizing Republican conservatism and nominating "modern" "me-too" presidential candidates to ape the Democrats.

But other issues and platforms evolved, especially once Ronald Reagan, with the help of the likes of Margaret Thatcher and other world figures, brought down the Soviet Empire.

Even before the cold War ended, there were gradual changes in both parties. Since that near half-century struggle was settled, Democrats and Republicans have applied their feet to the accelerator, albeit in different ways. This is not what you call "evolving."

The Democrats, especially while the Cold War was going full tilt, proceeded with the late FDR's "tax, tax, tax, spend, spend, spend, elect, elect, elect" strategy. Britain – pre-Thatcher – had gone socialist in the post-WWII era, and still remains so, even though the "Iron Lady" had rid it of its very worst extremities.

On this side of the pond, the Republicans publicly backed the verities and virtues of the free market, while supplying ample resources for its more "moderate" presidential "me too" hopefuls.

The U.S. nominally remained capitalist, while slipping in some socialist-light policies, though of course careful not to use that term.

So here we are in 2016, deep in debt, opening our borders – not in the spirit of many of our ancestors who came here because they wanted to be Americans and adopt our culture. Instead we open the gates to those who are encouraged to demand the "right" to mount what can appropriately be called an invasion. In this invasion and sellout of America, they are aided and abetted by ideologues or opportunists, or those who are indifferent to or despise this country's founding. 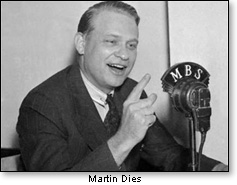 And about those party "switches"

During the Cold War, there were patriotic Democrats in Congress (Martin Dies and Pat McCarran come to mind) who were strongly anti-Soviet and supported America's strengthened defense buildups (Henry "Scoop" Jackson & Joe Lieberman).

After the end of the Cold War, people of that stripe either died off or were nudged out of the elected ranks of a Democrat Party that has increasingly hearkened to the siren song of Marxism and/or socialism.

Government post-Cold War policies increasingly have tended to downgrade or neglect the support and backup needed by our uniformed men and women who put their lives on the line for us. Meanwhile, as radical Islam is on a rampage throughout the globe, including in Europe, here in the U.S. some "leaders" never ask themselves whether our failures in some of the most respected "educational" institutions have anything to with the growing numbers of young people, having been indoctrinated instead of educated, who have eagerly signed up to fight for the forces of ISIS.

Rich vs. poor: which is which?

It used to be that the super wealthy in America were almost uniformly Republican. These days, more often they vote with the Democrats. There are several theories as to why that is the case. My own is that the public sector during the 20th century became bigger and bigger, demonstrating that you can make big money on government contracts as easily as, or perhaps more easily than, the private sector (to say nothing of social contacts).

Then there is the fact that the current generation of the moneyed class is more likely to have gone to Ivy League or other centers of "learning" where history and philosophy are often given a one-sided leftward twist.

Finally, the "liberal media" are likely to have your back if you bend in that direction.

Conversely, more working-class white voters have shifted sharply to the Republican side, often much to the chagrin of leaders of their labor unions. As John O'Sullivan noted in the Wall Street Journal, Republican leaders (the "donor class") have hesitated to take up middle-class conservatism (immigration, the defense of national sovereignty, and limited protectionism) for fear of seeming old-fashioned or losing their traditional corporate base.

Mr. O'Sullivan might very well have added that middle America now is put off by the left (most often found among Democrats) who have engaged in "political correctness" – i.e., presuming to dictate to Americans what to eat, what to say, adopting "gender neutrality," redefining the meaning of "family," encouraging little boys and girls to use each other's bathrooms in some schools, pushing the global warming "climate change" hoax, ad-infinitum.

Taking all this into account, no wonder Americans are angry not only at Democrats, but also at "establishment" Republicans, as the latter plays the "scared rabbit" role and won't fight back. It should come as no surprise, then, that such groups as the Tea Party should arise, or that the powerful forces of the left have heaped vile insults on citizens' right to protest.

No wonder many Americans are so angry and ready to listen to Donald Trump (whatever some think of his persona or credentials).

No wonder Americans are sick and tired of a political duopoly that can't bestir itself to stop a president who unconstitutionally acts like a dictator. 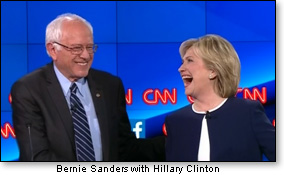 No wonder our people are downright frightened that a Democrat party can't do any better than to put up a socialist and a woman under FBI investigation to run for the highest office in the land.

No wonder Americans are being kept in the dark about plans for a new constitutional convention, a movement largely funded by billionaire socialist George Soros, whose goal is to transform us into a Marxist America.

No wonder Ted Cruz in his victory speech in Iowa opened his arms to the "Reagan Democrats" who did some political heavy lifting for the Gipper back in the eighties.

No wonder Americans are disappointed in a "healthcare bill" that has left a trail of higher deductibles and unemployment.

It would be presumptuous at this point to predict how all this will play out. But those who don't pay much attention because "it's all politics" need to take another look. Of course it's politics. What do you expect? What's your alternative?