Wes Vernon
Donald, stay on offense where it counts

Whose candidacy for President of the United States threatens to take down this country – if not from an outside attack (because of downgrading of military preparedness)...

...then possibly from within, a la Hillary carrying on the Obama legacy? You know what that outcome would mean: downgrading our exceptional nation, the envy of the world, as prosperous as possible in an imperfect world, God-fearing while guaranteeing everyone the right to religious freedom, including the freedom not to worship at all, if that is their choice.

What is the answer, Donald? Who presents a threat to the America we've known? Does that threat come from (A)...Hillary Clinton?...or is the culprit (B)...Alicia Machado? (Who?)

Think hard, now, Donald. You know it has to be one or the other, especially since "A" baited you into firing your tweeted rhetorical ammunition against "B" as if a Miss Universe had all the potential to inflict cataclysmic damage on millions of Americans and/or other human beings around the world.

Turn to page 2 of candidate quiz

Donald, when you are lying awake during the wee, small hours of the morning while nursing your personal grievances, try to speculate that you may...MAY...within the following 48 hours, come to regret an uproarious public blowback over a tweeted issue about which nobody (or almost nobody) gives a tinker's damn.

Try to think, Donald, about the fact that "Crooked Hillary," if she is elected instead of you, will have the power to nominate and fill at least 92 vacant federal judgeships, including one on the highest court in the land that was created when Antonin Scalia, arguably one of the greatest legal minds ever to sit on the Supreme Court, died in February.

Just wait until the election is over and she wins, Donald. There will be nothing "sleeper" about the issue then. In the next 4 to 8 years, she will be able to select enough justices to turn our beloved Constitutional Republic on its head, and extend and worsen the handiwork of Democrats and liberals in recent decades as they have worked to transform this "Shining City on the Hill" into a European- style socialist republic, or worse.

Alexander Hamilton once described the Supreme Court of the then newly-created USA as "the least dangerous branch." In our time, liberal left maneuvering has been nudging it into becoming the most dangerous branch of government. Left-wingers in all three branches have flouted the Constitution, attempting and often succeeding in re-making the High Court and lower courts into a super legislature.

The damage can be seen in court decrees that have replaced constitutionally-created principles with dictatorial edicts that have done injury to the three major tenets of the U.S. Declaration of Independence – "Life, Liberty, and the Pursuit of Happiness." If Hillary succeeds Obama in the White House, all three of those principles will continue under assault until America will not be America anymore; at least not as we have known it.

What all this comes down to, Donald, is that you hold in your hand the intellectual and political keys to whether America survives. We have already withstood Supreme Court and lower court decisions (as well as legislation heading for the courts) that appear designed to strike down the meanings of issues as they have been understood by normal people for decades – even centuries.

Whole meanings of terms in the plain English language have been heaved into the ash can by leftist lawmakers and liberal judges and justices. "Political correctness" is one way to describe it. Trying to "shut you up" is an accurate translation.

Again, back to Regnery's description of judicial appointments as "the sleeper issue": That term fits insofar as it applies to the woefully inadequate attention that has been paid to the drip, drip, drip that has characterized court decisions that have been eroding the right to free speech, freedom of religion, right of law-abiding citizens to own a gun, and protection from a certified anti-American billionaire, George Soros, and his associates, who use their wealth and influence in what can only be described as an attempt to bring down our America. 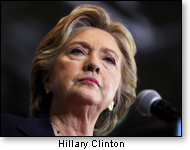 So Donald, please! Next time you are lying awake at night and inspired to tweet anger at some (20 years ago) "beauty queen" for some perceived slight, ignore it.

Something like the Miss Universe mini-flare up is likely to have been a Hillary Clinton creation, brought to light for the express purpose of baiting you into public anger that opens the way for the organized left to get you to focus on Mickey Mouse stuff of no consequence – thereby distracting your attention from the arguably criminal schemes of Hillary to tear down everything good in America just so she can write the history books, as the Clintons' dishonest "pay to play" schemes suggestive of outright bribery escape the more massive attention they deserve.

Millions of Americans are counting on you, Donald. Please don't let us, or yourself, down. In dealing with Hillary, get on offense and stay there. You will need your energy to dispatch an accused criminal to the proverbial ash heap of history.