A Putin kind of communism

July 2, 2014
Russian President Vladimir Putin has awarded the Order of Alexander Nevsky to the head of the Communist Party of the Russian Federation, Gennady Zyuganov. 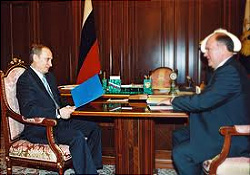 The Order of Alexander Nevsky was originally a Tsarist honor which was later adopted by the Soviet Union, and then the Russian Federation. The post-Soviet award is primarily for civilian activities.

Zyuganov, who has led the Russian Communist Party since 1993, has expressed support for the revival of the Soviet Union, changing the names of the Russian cities of Volgograd and St. Petersburg back to their Soviet-era names of Stalingrad and Leningrad, and is on record as declaring that the USSR was the "most humane state in human history."

The award was made public on Zyuganov's 70th birthday. In a meeting with Zyuganov, Putin gave also gave him a statuette of a popular Soviet-era hero Vasily Chapaev, according to the report. 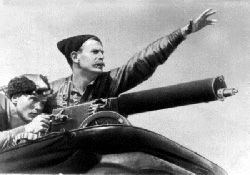 Chapaev was a Bolshevik officer during the Russian Civil War, which pitted the Soviet Red Army against the White Army attempting to overthrow Lenin's Communist state. Killed in action, Chapaev was known for his devotion to duty and his Soviet fervor. During the Soviet era, a book was written about him, a film depicted his exploits, and a class of cruisers was named after him.

On Zyuganov's 65th birthday, Putin had given Zyuganov a copy of the Soviet edition of the Communist Manifesto.

Obviously the Russian Communist leader and the President of the Russian Federation have a common appreciation for things Marxist and Bolshevik.

Putin, not known for tolerating any real opposition, decreed that Communist leader would receive the award despite Zyuganov's sometimes harsh criticism of Putin's government. Although the first president of the Russian Federation, Boris Yeltsin, declared in his 1992 address to a joint session of the U.S. Congress that the "idol of Communism" would never again arise, the Russian Communist Party has done just that. Zyuganov's Communists are now seen as an alternative to the still dominant United Russia Party led by Putin.

Putin and Zyuganov both see a very Red future for the Russian Federation.

Someone, however, better tell the Russian Ambassador to the United States, as well as the U.S.-Russia Forum.

The Russian Ambassador, Sergei Kislyak, stated on June 16, 2014 to the U.S.- Russia Forum that Russia is seeking to be a democratic state. According to an article in Accuracy in Media, Kislyak declared that "no ideological divides" exist between the United Staes and Russia.

A separate press article cited Kislyak's assertion that Russia is a new nation which is still working to develop a free economy and a representative system of government. In that report, Kislyak was quoted as declaring, "Just try to think where you were just 25 years after the revolution that gave you independence from the Brits."

The Russian Ambassador needs to check his history notes. Twenty-five years after the American Revolution would be 1808, by which time we adopted the present Constitution with a Bill of Rights, elected two of the greatest leaders this nation has had, Washington and Jefferson, and began the process of opening the western part of the continent to U.S. expansion. The nation was prosperous, free, and determined to stay that way, which we proved to the "Brits" in the War of 1812.

One could also cite the examples of Germany and Japan.

Germany had little experience with unfettered representative government. Germany had been a united nation only since 1871. German nationalism was centered upon the Kaiser ("Caesar") who held significant political power and often frustrated the elected representatives in the Reichstag. After defeat in WWI, the troubled Weimar republic was constantly threatened by Communists and ultimately overthrown by the National Socialitst Party (Nazi) under Adolf Hitler. Germany then fell under the spell of appeals to racial supremacy and mythical references to the purity of the ancient German Folk.

Twenty-five years after the defeat of the Third Reich in 1945, West Germany, the half of the country not under Soviet rule, was a strong and prosperous member of the European community. Japan overcame centuries of autocratic rule after its defeat in 1945 to become a model of representative government and prosperity throughout Asia.

The lesson is simple. To become a nation with a representative (republican) government, individuals must freely elect those who are to serve them. To become a market economy, those exercising political power must permit citizens to buy and sell without the doctrine of Marx interfering.

The political elite in Russia are doing something quit different. They are guiding Russia back to the dark days of the Soviet era, mistakenly seen by so many, including Russian youth, as glory days.

The next session of the US-Russia Forum scheduled for September 7-9, 2014. The theme will be a "constructive agenda for U.S.- Russia relations."

The US-Russia Forum should have on its agenda the topic of why the Russian political elite is taking the people of Russia back to Soviet tyranny. If the membership of the U.S.-Russia Forum finds this distasteful, the only reasonble course for them is to openly celebrate the Soviet Union and imitate Putin in giving away statues of Vasily Chapaev, or maybe even Josef Stalin.