December 5, 2008
Today, before the United States Supreme Court lies Leo Donofrio v. Nina Mitchell Wells, New Jersey Secretary of State. This suit was received by Justice Thomas, and by the determination of the entire court, it is scheduled for conference Friday, December 5. This conference is held to decide what, if any, further steps should be taken. Only two of these steps would be to either intervene in the process of selecting the president, or to hear oral arguments.

Essence of the case 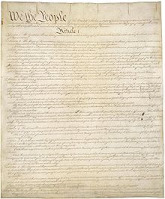 By this case, Barack Obama, John McCain, and Roger Calero (of the Socialist Workers Party, on the New Jersey ballot) do not qualify as "natural born Citizens" under Article 2, Section 1, Clause 5 of the Constitution, which states the following:

Other cases against Obama's candidacy have been rejected by various courts, due to a private citizen's apparent lack of standing to sue a candidate. However, this case is an action against the Secretary of State of New Jersey and as such, has precedent, as Donofrio relates. He originally sought to motivate the Secretary to qualify or disqualify these three candidates on the New Jersey ballot. Donofrio also cites 2000's famous Florida case, Bush v. Gore, as precedent for a state case regarding a presidential election to be brought to the Supreme Court for emergency action.

In view of these considerations, being a "natural born Citizen" here requires meeting both of these two criteria: (1) citizenship must be passed on by the constitutionally pertinent principle of natural law, which assumes that citizenship is inherited from one's father's citizenship, and (2) citizenship must be granted by means of being born in the actual territory of the United States. Accordingly, to maintain the original intention of the Constitution's framers, a U.S. President is to be free of competing allegiances with other nations, from birth onward. To cite Donofrio's own words from his blog:

The Framers wanted to make themselves eligible to be President, but they didn't want future generations to be Governed by a Commander In Chief who had split loyalty to another Country. The Framers were comfortable making an exception for themselves. They did, after all, create the Constitution. But they were not comfortable with the possibility of future generations of Presidents being born under the jurisdiction of Foreign Powers, especially Great Britain and its monarchy, who the Framers and Colonists fought so hard in the American Revolution to be free of.

According to this case, Barack H. Obama II is not qualified, because his father, Barack H. Obama I, was a citizen of the United Kingdom as a Kenyan. Kenya was a British colony at the time of Obama II's birth in 1961. This citizenship was conferred to Obama II by U.K. law. Further to this case is the apparent fact that Obama II became a citizen of Indonesia, when he lived there as a child with his mother and adoptive father, Lolo Soetoro. This would mean Obama's U.S. Citizenship status was revoked, since Indonesia had no dual-citizenship provision with the U.S.A.

According to this case, John McCain is not qualified, because he was born on a military base in the Panama Canal Zone, which was a protectorate of the United States and has never been a territory of the United States, even though his parents were U.S. Citizens.

According to this case, Roger Calero is not qualified, because he was born a citizen of Nicaragua, to foreign parents, on foreign soil. The mere fact that Roger Calero was on the ballot in five states indicates to the Supreme Court and the nation, that the process of qualifying a presidential candidate is broken and intervention is necessary.

Corroborative to this case, the Constitution's Article 1, Section 8, Clause 10 states that a power of Congress is to "define and punish... offenses against the law of nations." The Law of Nations has been international law, which as documented by Emmerich de Vatel (1758) states, in Chapter XIX, paragraph 212, "The natives, or natural-born citizens, are those born in the country, of parents who are citizens. As the society cannot exist and perpetuate itself otherwise than by the children of the citizens, those children naturally follow the condition of their fathers, and succeed to all their rights."

Vatel follows with paragraph 215, in which he asserts, "It is asked whether the children born of citizens in a foreign country are citizens? The laws have decided this question in several countries, and their regulations must be followed.(59) By the law of nature alone, children follow the condition of their fathers, and enter into all their rights (§ 212); the place of birth produces no change in this particular, and cannot, of itself, furnish any reason for taking from a child what nature has given him; I say 'of itself,' for, civil or political laws may, for particular reasons, ordain otherwise."

The chief framer of the related 14th Amendment of the Constitution, John A. Bingham corroborated this dual criteria stating, "every human being born within the jurisdiction of the United States of parents not owing allegiance to any foreign sovereignty is, in the language of your Constitution itself, a natural born citizen." An extensive analysis citing this is Defining Natural-Born Citizen, by P.A. Madison, The Federalist Blog.

Since then, the case of Perkins v. ELG, U.S. 325 (1939) provides precedent for requiring these two criteria, for one to be called a "native born citizen" (see, The Law  Perkins v. ELG, blog, The Betrayal).

St. George Tucker, Justice of the Supreme Court of Virginia, wrote a version of the authoritative Blackstone's Commentaries: With Notes of Reference to the Constitution... which became a recognized resource for determining the framers' original intent. In his Volume 1  Appendix; Note D, he explained that the Article 2 "natural born Citizen" requirement was purposed to avoid competing allegiances:

That provision in the constitution which requires that the president shall be a native-born citizen (unless he were a citizen of the United States when the constitution was adopted,) is a happy means of security against foreign influence, which, wherever it is capable of being exerted, is to be dreaded more than the plague. The admission of foreigners into our councils, consequently, cannot be too much guarded against; their total exclusion from a station to which foreign nations have been accustomed to, attach ideas of sovereign power, sacredness of character, and hereditary right, is a measure of the most consummate policy and wisdom. It was by means of foreign connections that the stadtholder of Holland, whose powers at first were probably not equal to those of a president of the United States, became a sovereign hereditary prince before the late revolution in that country. Nor is it with levity that I remark, that the very title of our first magistrate, in some measure exempts us from the danger of those calamities by which European nations are almost perpetually visited. The title of king, prince, emperor, or czar, without the smallest addition to his powers, would have rendered him a member of the fraternity of crowned heads: their common cause has more than once threatened the desolation of Europe. To have added a member to this sacred family in America, would have invited and perpetuated among us all the evils of Pandora's Box.

Certainly, this applied to sons of subjects of the United Kingdom (and the fact that one such subject would travel abroad to declare himself a "Citizen of the World" before hundreds of thousands might also have provided relevant warning).

Intended result of this case

The Donofrio suit calls for a stay of the Dec. 15 Electoral College vote, until a constitutionally acceptable means is attained, of presenting the Electors a set of qualified candidates.

During or after their Dec. 5 conference, the Supreme Court could decide upon a number of directions. Their next step may be revealed this very day, or on Monday, Dec. 8, or at some other time. A book could be written of the many potential outcomes  and historians will write libraries about one set of results, in their hindsight.

Leo Donofrio reports that numerous obstacles have been intentionally placed in the way of his petitioning the courts, in both New Jersey and at the Supreme Court. He also names public officials who have at times attempted to mislead him and by their treatment of his case, have obstructed his path to the Supreme Court. That is another story and not an undramatic one.

Donofrio has had three blogs  and Internet harassment, as follows:

This report may be updated, here and/or at investigatingobama.blogspot.com, as progress is made. For information about the operations of the Supreme Court in such matters, see "A Reporter's Guide to Applications Pending Before the Supreme Court of the United States."