December 22, 2008
Renew America reader, the open letter below was entitled, "Elect Schwarzenegger President? Obama Says Yes We Can! Dear L.A. Times..." It was posted in my blog, Investigating Obama, yesterday and sent to the Los Angeles Times, in response to their Web article, "Schwarzenegger reveals tricks of the trade on '60 Minutes.'" I had found their story via Free Republic. 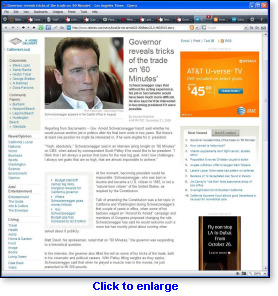 Then, something very peculiar happened. Here is the story of the story.

After posting and sending the email, I found from a blog comment by Ted, that the very same L.A. Times article was featured in Drudge Report, entitled "Schwarzenegger: I Would Like To Be President!" And then, later in the evening  poof! The lead disappeared! All references to Schwarzenegger not being a natural born citizen, thus not eligible for the U.S. Presidency were deleted. Funny how such a thing can happen, eh?

Was it because of the implications this has, at such a sensitive time  what with cases before the Supreme Court clearly showing Obama to be a fictitious candidate, not a natural born Citizen at all? And with Congress yet to certify the vote? You can click the image above to enlarge it and see the article before it was so drastically edited. Then, click the image at the right, 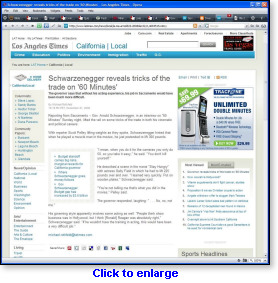 to see what it became, after the Drudge  FR  I.O., etc. hub-ub began to bubble and the big picture had become clear.

Below is the initial I.O. post, the open letter to the L.A. Times.

Sorry, but something that's getting way anachronistic showed up today in your article, "Governor reveals tricks of the trade on '60 Minutes.'" You wrote there that Gov. Schwarzenegger wants to be able to run for president but he can't, because he "is not a 'natural born citizen' of the United States, as required by the Constitution."

Hey, not to worry. I mean, if Congress and the Supreme Court allow Barack Obama to be our next president, next month, then the way is free and clear! You see, his father, Barack Obama I, was a Kenyan and a subject of the United Kingdom. He even passed on his citizenship to Barack II. The sites that your colleagues in the media defer to about Obama confess to it: Annenberg's factcheck.org and Obama's own fightthesmears.com.

To be a natural born Citizen, according to Article II, Section 1, Clause 5 of the Constitution, one must be born in United States territory and his parents must be U.S. Citizens. That is what the term meant to the Constitution's framers and therefore continues to mean, to honest people. You see, they wanted to do what they reasonably could, to assure that a true blue American would control our military  one with no other allegiances at all, ever.

But, the joke is, John McCain was never legitimate for the office either, since he was born in Colon, Republic of Panama. And what's really ripe is, five states had a Nicaraguan on their presidential ballots: Roger Calero. Do you think it's a fad  unconstitutional presidential candidates  "the new black?" Over 120,000,000 American voters were presented a pair of fictitious candidates by the two parties that control our politics. Isn't that funny?

Please issue a correction and let your readers know the Constitution is becoming even more obsolete  so all things are now possible! I trust the California governor may be pleased. Arnold in 2008! Maybe eventually he'll run against Vladimir? Mahmoud?

There's a whole world of possibilities, with our "Citizen of the World" at the White House door. Spread the word!

PS: You could read about this, here  and there is a whole incinerator-full, here.