December 31, 2008
Permission to copy and post this article's text is granted.

Update 1/1/2009, 3:36am CT - In his 7:45pm Plains Radio broadcast, this last night, Ed Hale backed down from his prior assertion of having gained even uncertain information about the Barack Sr. / Stanley Ann divorce decree containing language referring to Barack Jr. as being born in Kenya. Instead, Hale referred to an apparently tricky recollection... of an indeterminate person... referring to such a document's generally referring to the place of birth of the children of the divorced parents. That is not what I heard from Mr. Hale on the 31st.

Two people reported during the broadcast that they had contacted Hale's private investigator yesterday, who indicated he did not thoroughly read the documentation and does not know how it addresses Barack Obama Jr.  nor did he make a copy for himself. It would appear that Hale will receive a valid copy of this decree, probably Friday, 1/2. What it states will be what it states. He promises to post and report, as described below.

While my article maintains a journalistic separation from the principals of this story and is a report of statements of others on the matter, I believed it worthy of "pushing out" to readers and those who would faithfully relay the story. That worth appears less merited at this point and I apologize for that, to them and you. However, this should mean the first public viewing of that divorce decree. If it does not include information pertinent to Barack Obama's birth, at least that will be known. And that is more than may be said of President Elect Obama's actual birth certificate. This also seems fitting for a politico who advanced to the U.S. Senate along a path of the convenient "mainstream media" reporting of scandals from two of his opponents' own divorce records and an "outing" of a family member of another; sauce for the goose.

I.O. emphasizes that place of birth aside, Barack Obama is clearly and thoroughly not a natural born Citizen and is therefore specifically ineligible to be our United States President. This is due to his U.K. citizenship at birth, passed from his father. That is referred to below and explained in the article, "The Donofrio 'Natural Born Citizen' Challenge."

I.O. also observes that even a valid hard copy of the kind of certificate of birth that Obama has ostensibly submitted is not the kind of birth certificate which is required for numerous purposes. Further, it is suspect that Obama has invested what some say is approximately $1M to keep his actual, Hawaiian birth certificate undisclosed  seemingly thematic with "pleading the Fifth." At the very least, it would officially document his father and that is one wheel off his bike to the White House.


12/31 - A private investigator in Hawaii has uncovered the divorce decree for Barack Obama's father and mother, which indicates they had "one child under the age of eighteen, born in Kenya." That is the report of Ed Hale of PlainsRadio.com, an Internet radio site which has focused upon the natural born Citizen challenges to Obama's presidential eligibility.

Hale announced this during his evening Internet broadcast on PlainsRadio.com, Tuesday, 12/30 and confirmed it with I.O. in an online interview, later that night. He reported that certified copies of this documentation have been sent from Hawaii by the investigator to himself and four others. Hale is to receive his copy today, Wednesday, 12/31 and plans to post it graphically on the site, during the day. He will also discuss this on a special Internet broadcast, between 6 pm and 10 pm Central Time, tonight. The site streams audio as soon as it is accessed via Web browser.


Link to PlainsRadio and their message forum

Link to PlainsRadio and chat window
The Texan Internet entrepreneur relates he got fed up with the lack of documentation on Obama and decided to discuss ideas with his radio audience. His offer to hire an investigator was met with piecemeal sums of money from listeners to his broadcasts. Hale said some of the information one would expect to find was not available. For example, documentation from Obama's mother Stanley Ann's divorce to her second husband, Lolo Soetoro, had vanished. Hale speculates, the reason this forthcoming 1964 divorce decree had not also been "scrubbed" could be that the divorce had been filed not by Obama's mother, but by Barack H. Obama, Sr. Thus, it may have been overlooked by any plumbers for Obama.

Hale does admit to incomplete certainty of his investigator's work until he receives it, partially due to the PI's accent, the telephone connection, and his slight hearing impediment. However, he is very confident of what he will receive during the day. Mark S. McGrew, who writes about Obama's natural born Citizen problems for Pravda.ru, accompanied Hale in his broadcast and also expressed confidence. McGrew had sought publication in numerous American news outlets, but they turned down his articles referring to Obama's apparent ineligibility. Russia's Pravda however, decided his effort to find and report the truth was not to be redlined.

As often related, Barack Obama, due simply to his U.K. citizenship at birth via his Kenyan father, is not a natural born Citizen of America, by definition and the original intent of that term. The Supreme Court has turned down cases which make this point, but according to a September decision in a lower federal court (regarding John McCain's eligibility problem), this would be due to a question of jurisdiction, until Congress is to certify the Electoral College vote on January 8. Further action is to occur, after this date. You may read about this in previous I.O. articles and the sites linked in its sidebar. 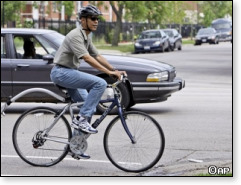 Meanwhile, on the question of Obama's place of birth, professionals dealing with documents and forensic evidence have testified that the online "certificate of live birth" provided by Obama is not identifiable evidence of American birth. Now, if Obama's parents' divorce decree states that he was born in Kenya (as his Kenyan grandmother has repeatedly stated), the second epistemological wheel is coming off his vehicle to the White House.

Will Congress pay attention and do its Constitutional duty?