Arlen Williams
Barack Obama - 'the future of this movement'

January 18, 2009
While some of Obama's moves may be viewed as "liberal" and others as "moderate," or even "conservative," by America's self-confident pundits, essentially, there are only two objectives he must meet, to be a successful neo-Marxist, neo-Fascist (albeit, fictitious) president:

The following email from this man and this movement is chiefly about the former. Remember, as he told his followers on that eerie night of his acceptance speech, this may be a long process, before ultimate goals are attained.

I have some exciting news to share about the future of this grassroots movement.

I recorded a personal message for you. Please take a minute to watch the video: 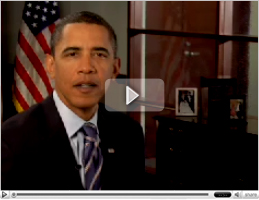 
What you built can't stop now. Together with our partners at the Democratic National Committee and its new chairman, Governor Tim Kaine, this movement will continue organizing and bringing new people into the political process.

The challenges facing our country are too great, and our journey to change America is just beginning.

I look forward to working side-by-side with you in the months and years ahead.