January 23, 2009
This act of national treachery and international atrocity by "President" Obama is now done. Today, by executive order, our money is now being confiscated by federal tax and used to promote the killing of infants in the womb, throughout the world. Global socialist and eugenicist abortion pushers hide behind the fallacious "health of the mother" excuse, in citing this move as favorable to human rights, though it is all about killing humans. That posture is deceit, since discussing surgical assistance for mothers in jeopardy was never denied by the Mexico City protocol, now reversed by Obama (last known evidentiary name: Soetoro).

ChristianNewsWire quotes Roman Catholic clergyman, Frank Pavone, "When President Obama takes money out of taxpayers' pockets to abort children, he can no longer claim with any legitimacy that he wants to reduce the number of abortions performed here or abroad. Forcing Americans to pay for the killing of innocents will not 'bring us together;' there can be no common ground when the ground is soaked with innocent blood." 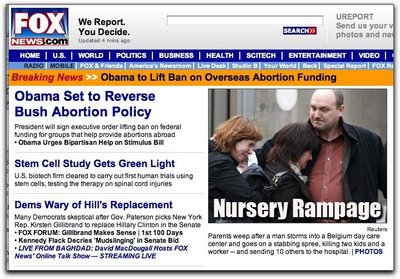 On the right we have the Nursery Rampage where a man stabs kids in a Belgian nursery. On the left we have the headline where Obama reverses the ban on funding oversees abortions. For the first there is outrage. For the second there is jubilation by the pro-aborts. Which kills more children?

And if that's not enough, there's the story about the start of a clinical trial that will use embryonic stem cells  just in case we're not killing enough babies through abortion.

From the morning's FoxNews.com article, "Obama to Lift Ban on Overseas Abortion," beginning and last two paragraphs, below.

President Obama on Friday is expected to lift a ban on federal funding for international groups that promote or perform abortions, reversing a policy of his predecessor, George W. Bush.

"President Obama not long ago told the American people that he would support policies to reduce abortions, but today he is effectively guaranteeing more abortions by funding groups that promote abortion as a method of population control," said Douglas Johnson, legislative director of the National Right to Life Committee.

The innocent infant's excruciating terror, of being gouged and torn limb from limb in the womb increases, while life gets easier for terrorists both abortionist and Islamist. May you be saddled with the judgment thereof, Barack  the blood of "the least of these, MY brothers" be upon you and your conspirators in this.