The following was published in my blog this June, after some delayed post-campaign R&R. If you do not mind the delay, perhaps you will find its reflections commiserating with your own soul. In the next items here, I hope to convey good perspective, with some forewarning and forearming toward a near-term future in which I believe America will be quite shaken. I actually pray it is thoroughly stirred by God's own hand, for the sake of repentance and renewal  and whatever good force and sacrifice we must devote, to afford greater, not lesser freedom, for the fruition of His ineffable results out of our world.


Why do You show me iniquity,
And cause me to see trouble?
For plundering and violence are before me;
There is strife, and contention arises.
Therefore the law is powerless,
And justice never goes forth.
For the wicked surround the righteous;
Therefore perverse judgment proceeds.

Last September, I decided to open a weblog called "Investigating Obama." It was intended to be a little launching pad for the distribution of one-page warnings, just before the general election, of the grave dangers inherent in the act of voting for Barack Obama, for president.

In October, I wrote the first, "ACORN & Obama  Allied How? To What End?" listing the documented ties which show that Obama has arisen of, by, and for the same neo-Marxist movement.

Later that month, the other one-pager, "Investigating Obama: Career Path Toward a Neo-Marxist Presidency," achieved an appreciable degree of circulation, boosted by headline linking on FreeRepublic.com. This traced what was known, by that time, of Obama's birth to Marxists, his nurturance and mentoring by Marxists, and his education and highly developed career path to the presidency  all interdependent with the investments of fellow Marxists and radical Islamists. Both FreeRepublic and the site storing the articles were hit by cyberattacks. 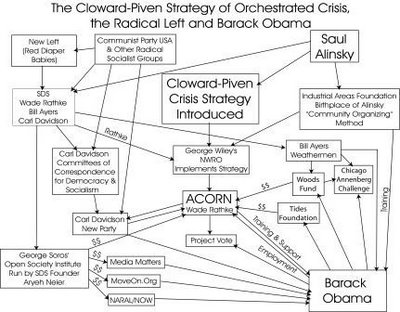 While numerous sources were cited, the research and writing most critical to this exercise was James Simpson's "Barack Obama and the Strategy of Manufactured Crisis." This was to date, the most revealing study of the Marxist operations leading up to the Obama regime, including the work of Saul Alinsky, Richard Cloward/Frances Fox Piven, George Soros, "community organizations," SDS/Weathermen madmen, and alas, my PUMA friends, Mr. and Mrs. Clinton. It also began to point out a systematic intentionality behind the well-timed and so highly effective "mortgage meltdown"  an intentionality we have begun to see spreading beyond those we have tended to understand as Marxist, to a greater evil collaboration of those seeking a globally controlled society. After all, evil, godlike control over our lives (and deaths) is the shared aim of all the world's "ubers," of all super-elites.

Tragically, Obama was "elected," and I found myself with a continuing chore. Investigating Obama continued to point out strategy and tactics of his evil ideological movement. It also traced highlights of the movement to bring Barack Hussein Obama II, a.k.a., Barry Soetoro and all those responsible in his pseudoelectoral process, to constitutional accountability regarding his readily apparent ineligibility for the presidency.

I have tried to avoid this site's becoming another set of general criticisms of Barack Obama and his "questionable policies." That gives him and his comrades much too much credibility. In fact, this writer has "had it up to here" with political pundits complaining and head-scratching about "President Obama."

Any commentator who bills himself as one seeking to conserve the declared principles of America and of our Constitution, but who does not point out, front and center, that Obama is a hardcore Marxist is incompetent and passe'. Such a person has no excuse for the pussyfooting, by this time. They are akin to the flaccid compromisers of the Republican congressional contingent and their cigarette sucking Repub Club operative friends.

Any commentator who fails to study and declare the evidence and implications of Obama's ineligibility for the presidency is likewise a blithering shame, even if his name is Limbaugh or Beck. And any Horowitz, Malkin, or Medved who ridicules those who side with the Constitution against the usurpation of the presidency is worthy of contempt  or pity, you can choose.

It may seem, this June 2009, that we are at an impasse  and what but the posterior of an imp could stink as repulsively as this? I am tired of walking up to this stench day after day, and breathing it. It burns the nose, much worse than stale air, but there is no stalemate, here. There is instead, a course which this putrid disease is taking and the cure continues to be humbled adherence to the healing power of truth  and especially, truth's Author.

I took much of the month of May off from posting in I.O. Now, that time is over. It is time to meekly rejoin the ranks of those who are applying themselves faithfully  to regroup and reassemble what we know  and we know even more, significantly more. It is time to tell more of the truth to more of the American People and the world, regardless of the only semipotent to useful idiot "thought leaders," who are themselves concomitant with America's Marxist "dumb-down" and the hoodwinking by the fraud known as "President Obama." No excuses.

America's greatest active enemy is in control of the White House, Congress, our financial system, and half our courts.

Or, is that true, Pogo? Or is America's greatest active enemy the willful ignorance of its People?

As it is, if you wish, you will have more information here, for the overcoming of these determined enemies, which are purposefully destroying America.