December 18, 2009
The following article is Lord Christopher Monckton's own, republished from yesterday's addition to The SPPI Blog, which he co-authors. It is featured in my Investigating Obama blog, since Barack Obama is, by his pitched efforts, a co-conspirator in the Man-Made Global Marxofascism shakedown, along with Maurice Strong, Edmund de Rothschild, George Soros, Al Gore, Jeffrey Immelt  General Electric's robber baron, etc.

"Marxofascism?" Yes, it is an archetypal combination of Marxist redistribution of wealth, plus profiteering by kleptocratic finance, or, "gaming the system," as the man behind the curtain of America's Democratic Party, mega-criminal financier György Schwartz (a.k.a., Soros, by his literally "making a name for himself") tends to say.

Monckton is the former science advisor to Margaret Thatcher, who is taking the lead in exposing this global ploy, a scheme of the kind that might have come from the minds of Ian Fleming and Cubby Broccoli. His DVD, "Apocalypse? No!" conveys his presentation at Cambridge University on the subject. This has been covered previously by I.O. (see label, "Lord Monckton") and on "The Awakening," thanks in part, to the diligent citizen journalism of Walter Hudson. 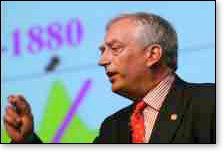 From The Viscount Monckton of Brenchley in Copenhagen

Today the gloves came off and the true purpose of the "global warming" scare became nakedly visible. Ugo Chavez, the Socialist president of Venezuela, blamed "global warming" on capitalism  and received a standing ovation from very nearly all of the delegates, lamentably including those from those of the capitalist nations of the West that are on the far Left  and that means too many of them.

Previously Robert Mugabe, dictator of Rhodesia, who had refused to leave office when he had been soundly defeated in a recent election, had also won plaudits at the conference for saying that the West ought to pay him plenty of money in reparation of our supposed "climate debt."

Inside the conference center, "world leader" after "world leader" got up and postured about the need to Save The Planet, the imperative to do a deal, the necessity to save the small island nations from drowning, etc., etc., etc.

Outside, in the real world, it was snowing, and a foretaste of the Brave New World being cooked up by "world leaders" in their fantasy-land was already evident. Some 20,000 observers from non-governmental organizations  nearly all of them true-believing Green groups funded by taxpayers  had been accredited to the conference.

However, without warning the UN had capriciously decided that all but 300 of them were to be excluded from the conference today, and all but 90 would be excluded on the final day.

Of course, this being the inept UN, no one had bothered to notify those of the NGOs that were not true-believers in the UN's camp. So Senator Steve Fielding of Australia and I turned up with a few dozen other delegates, to be left standing in the cold for a couple of hours while the UN laboriously worked out what to do with us.

In the end, they decided to turn us away, which they did with an ill grace and in a bad-tempered manner. As soon as the decision was final, the Danish police moved in. One of them began the now familiar technique of manhandling me, in the same fashion as one of his colleagues had done the previous day.

Once again, conscious that a police helicopter with a high-resolution camera was hovering overhead, I thrust my hands into my pockets in accordance with the St. John Ambulance crowd-control training, looked my assailant in the eye and told him, quietly but firmly, to take his hands off me.

He complied, but then decided to have another go. I told him a second time, and he let go a second time. I turned to go and, after I had turned my back, he gave me a mighty shove that flung me to the ground and knocked me out.

I came to some time later (not sure exactly how long), to find my head being cradled by my friends, some of whom were doing their best to keep the police thugs at bay while the volunteer ambulance-men attended to me.

I was picked up and dusted me off. I could not remember where I had left my telephone, which had been in my hand at the time when I was assaulted. I rather fuzzily asked where it was, and one of the police goons shouted, "He alleges he had a mobile phone."

In fact, the phone was in my coat pocket, where my hand had been at the time of the assault. The ambulance crew led me away and laid me down under a blanket for 20 minutes to get warm, plying me with water and keeping me amused with some colorfully colloquial English that they had learned.

I thanked them for their kindness, left them a donation for their splendid service, and rejoined my friends. A very senior police officer then came up and asked if I was all right. Yes, I said, but no thanks to one of his officers, who had pushed me hard from behind when my back was turned and had sent me flying.

The police chief said that none of his officers would have done such a thing. I said that several witnesses had seen the incident, which I intended to report. I said I had hoped to receive an apology but had not received one, and would include that in my report. The policeman went off looking glum, and with good reason.

To assault an accredited representative of a conference your nation is hosting, and to do it while your own police cameramen are filming from above, and to do it without any provocation except my polite, non-threatening request that I should not be manhandled, is not a career-enhancing move, as that police chief is about to discover to his cost.

Nor does this incident, and far too many like it, reflect the slightest credit on Denmark. We must make reasonable allowance for the fact that the unspeakable security service of the UN, which is universally detested by those at this conference, was ordering the Danish police about. The tension between the alien force and the indigenous men on the ground had grown throughout the conference.

However, the Danish police were far too free with their hands when pushing us around, and that is not acceptable in a free society. But then, Europe is no longer a free society. It is, in effect, a tyranny ruled by the unelected Kommissars of the European Union. That is perhaps one reason why police forces throughout Europe, including that in the UK, have become far more brutal than was once acceptable in their treatment of the citizens they are sworn to serve.

It is exactly this species of tyranny that the UN would like to impose upon the entire planet, in the name of saving us from ourselves  or, as Ugo Chavez would put it, saving us from Western capitalist democracy.

A few weeks ago, at a major conference in New York, I spoke about this tendency towards tyranny with Dr. Vaclav Klaus, the distinguished economist and doughty fighter for freedom and democracy who is President of the Czech Republic.

While we still have one or two statesmen of his caliber, there is hope for Europe and the world. Unfortunately, he refused to come to Copenhagen, telling me that there was no point, now that the lunatics were firmly in control of the asylum.

However, I asked him whether the draft Copenhagen Treaty's proposal for what amounted to a communistic world government reminded him of the Communism under which he and his country had suffered for so long.

He thought for a moment  as statesmen always do before answering an unusual question  and said, "Maybe it is not brutal. But in all other respects, what it proposes is far too close to Communism for comfort."

Today, as I lay in the snow with a cut knee, a bruised back, a banged head, a ruined suit, and a written-off coat, I wondered whether the brutality of the New World Order was moving closer than President Klaus  or any of us  had realized.

Brutality is as stupid does.