Arlen Williams
Obama: 'We're still working on our democracy' - as a demolitions crew

April 13, 2010
The United States of America is a democracy in only a loose sense, similar to saying Marxofascist, Barack Obama is a "socialist." Obama's "progressive" mindset would have us "progress" far outside what we in fact were meant to be: a constitutional republic of free and sovereign Citizens  and a sovereign nation in the world. But while Obama does not worry much about "process" in his socialism (effective demolition of American sovereignties being his main objective, precisely how that is done is of less concern) America's Founders were extremely careful in the design of our republic, expecting us to be just as careful to keep its rules, in order to maintain God's gifts of liberty and constitutional justice. 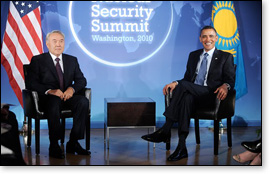 "In connection with the OSCE, the presidents had a very lengthy discussion of issues of democracy and human rights," NSC senior director Mike McFaul said on a conference call with reporters Sunday. "Both presidents agreed that you don't ever reach democracy; you always have to work at it. And in particular, President Obama reminded his Kazakh counterpart that we, too, are working to improve our democracy."

....McFaul said. "[Obama's] taken, I think, rather historic steps to improve our own democracy since coming to office here in the United States."

The reader is encouraged to read and mull over the entire article in FP.

Meanwhile, Obama will keep working to, in true Marxist, Hegelian fashion, "fundamentally transform" America, from what it is authorized to be, to what the global Marxofascist mind fallaciously imagines. Both the means and ends are always deceit, theft, and on numerous levels, violence. But, in order for Marxists and fascists to gain and maintain power, they always bill themselves as "democrats," administering "social justice" to their (enslaved) people.