Arlen Williams
Sarah Palin gets an 'A' on the curve, but full credit remains for someone

May 25, 2010
This is worth our time. It is Sarah Palin's address, then her joining with Dennis Prager and Hugh Hewitt for questions and answers, last Saturday 5/22, at the University of Denver:

The event covered the bases of what constitutes inspiring conservatism, to the conventional 2010 mind and Governor Palin was luminous of mind and heart. Some even call her edgy and by conventionality's standards, she is. But two critical aspects of the doings of 2010 were missing on this evening, again. They are what is never communicated in polite Republican speeches, whether in reference to the current regime in the District of Columbia, or the broader usurpations presently schemed on lower Manhattan Island.

One observation left unexpressed is of the devastating, intentional sabotage of America, by causing its catastrophic economic and moral failure. This gambit of evil doers is intended to result in the transformation of a panicked America into a people thoroughly dependent upon the Marxist/fascist state, while the manipulated, community organized and unioned-up "proletariat" lead the way, in revolt. Call it Alinskyite, or Cloward-Piven, or Greecification. Call it revolution or insurrection; it is the Marxist method and the reason for the career path of Barack Obama, Saboteur in Chief.

Necessary for that revolution is the other element never fully articulated in the Republican speeches brought at least, to these ears: the elimination of the American sovereignties. That means the treasonous destruction of the personal sovereignty of the American Citizen and of our mutual principality of the People, claimed by our Declaration of Independence and Constitution. It is the effort of overruling parental sovereignty in our families and the denial of the Tenth Amendment sovereignty of each state in the union. And as for national sovereignty, the plan is for America to cease to exist as a true nation, but only a "country," as Obama so often terms us, controlled by the governance of the global Marxist/fascist state.

Perhaps the first of these alarms would be taboo because it seems too outlandish to be believed, or so think good Republican political consultants, despite the evidence of Glenn Beck's and numerous authors' success. As for the second warning, that would also motivate voters, but it would offend the GOP's influential parties of the third part, such as members of the U.S. Chamber of Commerce and the stockholders and executives of multinational corporations, which still donate in great sums. To so many of their conventional minds and investment accounts, globalism "is good," globalism "works." 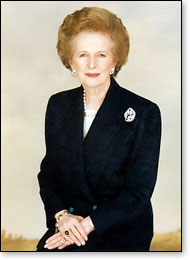 Sarah Palin referred to Margaret Thatcher in her Q&A session, by her reminding the world that heeding the teachings of the Old and New Testaments is what made America great. Another famous line from the Prime Minister was that, "...socialist governments traditionally do make a financial mess. They always run out of other people's money." In the minds of the power hungry, whether "left" or "right," the plans of authoritarianism do turn out well, for them, because they simply gain more power, taken from others  that is, such plans work well in the "acquisition phase," until authoritarianism actually sets in and the shoulders of the people they stand upon collapse, under their oppression.

God providing, these plans for the end of authentic America shall not work and we will relearn authentic Americanism, founded upon the gift of liberty and born of responsibility to our Creator. But, to play our part in victory and to defeat such a massive assault, we must regard the enemy, its weaponry, and its tactics of warfare as what they are. When will any politicians on the national stage show and tell that?