Arlen Williams
TED vs. Western Civilization, 'which side are you on?'

August 10, 2010
You've met TED, haven't you? Maybe you've sat through a patronizing video here, or a read a condescending article there, lately?

Contrary to what you may think, TED does not stand for Tediously Egocentric Dweebs  at least that is not what they intended. It is to signify the bright ones getting together to lead the rest of the world with planned Technology, Entertainment, and Design. Wait, am I being redundant? (Taking a moment, thinking to myself... T... E... D... above.) Yes, sorry, please pardon the tautology.

TED is essentially an attempt to indoctrinate the generators of the world's sociological infrastructure (from especially, an humanist's limted view) with global Marxism. It is ostensibly funded in large part by the Sapling Foundation (think of an ACORN, sprouted). The Sapling Foundation is American, by its headquarters and very un-American by its anti-Sovereignty, globalist, Marxofascist intent. Where does its money come from? Perhaps only God and they know (well, and the demons involved). Their human minions are legion. Let us look at one. 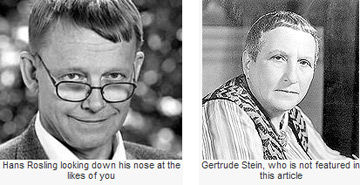 Meet Hans, who is TED. I can not tell you for sure whether Hans is an acronym, but we may have a good idea of what he stands for.

Now, TED-Hans is seen in the video below, addressing all the other, mutually appreciateive TEDs about the constant worry of the global dweebs: overpopulation. (Whenever they say that, do they mean excessive population? Just a thought after a pregnant pause.)

He actually makes a good observation here: that population growth tends to slow, when a culture becomes more wealthy  that parents have fewer children when they can realize good care for the children they do have. And since I'm being redundant: that is, once parents are self-empowered enough to achieve the means to care well for their own children, they tend to lovingly devote that care with the discretionary income and property they attain. And that costs a lot more than just carelessly doing what causes children to be made, in the first place. Then, since individuals have God-given sense, the world's parents choose to have (we hope, conceive) fewer of the beloved but costly little rascals and train them in turn, to become responsible parents, themselves.

As Ted, I mean Hans, describes, "It's only by child surviving that we can stop population growth." He means child survival, not surviving your children. English is his second language. He's an educated guy  credit where credit is due.


Video, Hans Rosling, TED, talking to his audience, TED, in June, in Cannes, France and perhaps not satisfied until a lot more Americans are riding bikes


...what does he do, but bookend this important and not deeply enough explored concept, at first with the mantra of the Marxist, the overriding worldview of the haves vs. the have nots. Thus, partially blinded, he then careens into the even deeper do-do always found by the over-exhalation of presumed socioeconomic class rivalry. In other words, he swings with the irrationally assumed arch principle of envy, as rule for living and advancement, grievously odd and self-destructive as this always is.

As many of you know, this lame idea is presented as quite an intellectual leap and is always a dead giveaway of recursive (i.e., loopy) Marxist thought. It goes, "Some have a comfortable bunch of stuff, while others need quite a bit more. I know! Let's force ourselves on the first guys, gain access to their stuff, and leech them out, while getting the other bunch to depend on us, for what we get from the first bunch! Meanwhile, we will have all the stuff we want! All the best caviar, vodka, dachas, and trips to the resorts!" (See the personal behavior of the Obamas, here.)

For any of you who have read the Gospels (those are the four "books" in the "New Testament" that tell about the life of Christ) that is what Judas did and why he was so righteously indignant when a woman anointed Jesus Christ with expensive perfume, right before the crucifixion. He reprimanded Christ that this expense should have gone to the poor! Meanwhile, we are told, as treasurer, he was taking what he wanted of Jesus' sovereign funds, for himself.

And always the thinker, Hans suggests the way to achieve the rise of the have nots from poverty!  though, in its many implementations, his school of thought has never succeeded in ending... poverty, nor can the model just described come close. Does he want to guard the opportunities of the disadvantaged, to be free to make sound economic decisions for themselves? Of course not. His way is to provide the following to them (ironically, having mentioned their obsession with haves vs. have nots, the Marxist-elitist always tends to think in terms of "us" vs. "them."):

a. green technology! (don't even bother trying to imagine the correlation, o non-TED)

That means, in the way the central planner carries out his societally cannibalistic ideology, he wants to proceed with:

a. violating the fundamental behavior of successful economics, which is essentially: the development of actual value, which is true productivity, not the imagined and imposed value of greenativity

b. the communitarian theft of "The West," with imposed "investments" of its wealth, by redistributing it, regardless of the sacredness of the right to keep one's property, a right upon which America's western ol' success is founded, economically  and never mind the actually wondrous effects of free and equitably negotiated international markets, which are very different from "the global market"

c. an end to the ingenious, God-provided check against absolute power's absolute tendency to corrupt: i.e., the sovereign nation (see Tower of Babel, that's in "Genesis," that's in "The Bible," strangely quaint as that may seem, to TED)

Generally, an article like this concludes with a savory morsel, to sum it up for the rumination. But, not this time. Enough recursion and redundancy. If you wish, you can glance at it again and come up with your own conclusion.