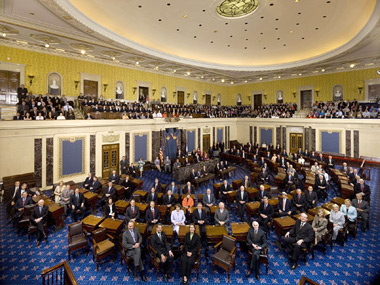 That 56-43 vote on Tuesday's Defense Authorization Bill troubled me. Four votes down, the senate Democrats must have known this motion for cloture would not succeed. And if so, they would have essentially intended it to fail, by loading it with all its perverse, non-defense provisions: adding taxpayer funded abortion on military bases to its nightmarish DREAM proposal, to repeal of "don't ask, don't tell." So odd, to go through this exercise, of inflaming the country yet again, so close to the General Election, just to cause a bill necessary for funding the American military to fail.

But one must remind, this is our progressive-led Congress, in Washington. Why would they not set up such a failure? After all, they are the ones who appear, busily carrying out the Alinsky and Cloward-Piven strategy (with George Soros, Maurice Strong, and all the UN kleptocrats) not to bring about a change to productive results, rather a truly "transformative change;" one which causes American government, American economics, and American society as a whole, to... fail.

And why would these Marxists and social Darwinists in DC be so busy to bring that about? For the best evolutionary development, of course.

Evolutionary development? How's that, again? In neo-Marxist revolutions, such a nationwide failure of self governance is required, to build up the government-dependent, proletariat forces and masses required for the revolution to be "democratic." The majority have to be made to want it  at least while it happens  if not afterward.

Yes, their "bright," enlightened souls imagine an evolutionary revolution for America. (Bright? For? I mean a very dark plot against America. When one talks Marxism, words turn inside-out and upside-down.) American collapse is at once a necessary economic product, of drawing out its personal wealth, and a required psychological outcome, in order to get a majority of its People to welcome a series of well-prepared, globalist and Marxofascist solutions to the world crisis caused by America being a failed state.

The result: UN to the rescue. It wasn't devised by global authoritarians for nothing. All the "world community" would have to do at that point, is connect United Nations global initiatives with America's continuing, Obama-built (and unconstitutional) national authoritarian infrastructure and Eureka! Manufactured desperation among Americans is met with universal hope and change. And for the rest of the world, it's too big to fail America is "saved."

Saved? Again, words fail, as one brings Marxist thought to the semiotic test of forthright language. The authentic America, of government, of, by, and for the Sovereign People would be brought to utter failure in suzerainty to world empire (and they call Americans the "imperialists").

And speaking of terminology, "National authoritarian infrastructure," I like that. Has a certain ring to it. The Marxstream media should dub our burgeoning new beast out of DC the NAI.

So, psssst: let's now call this the Failed State Strategy. When will that book title come out, eh? Someone will make some bucks off that. James Simpson has laid out how it is done. And so informed, the well positioned Glenn Beck gives whopper hints about it, on TV, radio, in print, and in flack-jacketed soliloquy, God save him. And get this part of the plot: to my eyes anyway, they seem to be setting up a crippled and globalist-subverted Republican administration and Congress in D.C., in 2013+ to be the epic target for this epic fail.

Just imagine a GOP-led government in 2013 and onward, trapped in office with the nation crippled and suffocating of our bureaucratic pressures, robbed of our wealth, with no way out, no repealing enough for escape, and no time left, like a deer seized by a python. Meanwhile, the proletariat becomes disturbingly restive  even "disruptive," to use Francis Fox Piven's favorite term. Then, another, even more revolutionary hope/change presidency may occur in 2016; more revolution fomented with each twist and turn, as prey America squirms and issues its last breath.

But, don't tell anyone and maybe I'll find the time to write the book.

Back to this week's odd failure. Maybe there is something to learn in this smaller picture. After all, the "progressive" Democrats know their fail!

So there your writer was, wondering about the Defense bill's failure being some kind of ploy. Then, I came across this, emphasis mine:

Dems Sabotaged Defense Bill to Fire Up Base for November

Whispers around Capitol Hill are the Defense Authorization bill was never meant to pass. Tuesday's cloture vote in the Senate on the annual Pentagon budget went down in a 5643 vote. The two Arkansas Democrats Blanche Lincoln and Mark Pryor both crossed party lines and voted with Republicans. Senate majority leader Harry Reid, Nevada Democrat voted no, so the vote could be brought up again at a later time.

Tacked on to the defense bill were controversial measures like the repeal of the military policy known as Don't Ask, Don't Tell, the pro-amnesty immigration bill called the Dream Act, and allowing abortions on military bases.

Many around the hill were skeptical the bill would get pass a cloture vote given the controversial subject matter and believe Democrats only wanted to fire up their most activist liberal base: pro-amnesty activists, LGBT activists, and pro-choice groups.

That is the first half of the short report. Click to finish and let the Washington Times have a bit more ad revenue. I am not quite sure it explains everything, but it looks like good, conventional wisdom and here is the point, not to be missed. It shows how important it is to the progressives, to keep their proletariat revolutionaries simmering, while more and more apparatchiks learn how to tend their pot, and while tinkering up the "NAI" stove.


But is America's epic fail inevitable? Perhaps not, if an humbled to God remnant of the Sovereign American People know the python is attacking now, while not quite yet in its death grip. But be warned. The grip can be so quiet and gradual, and at first, so soft, that a sleeping victim may not even know that subtle tickle is the python at work  not until surrounded, it is much too late.

By the way, you have seen this little chat, have you not? "The Phoenix Economy"  old adage snake, New Age Phoenix, pardon the mixed metaphors.

Learn a great deal more, from James Simpson's "Manufactured Crisis" Article Series and he will get a mite of ad revenue, too: