Arlen Williams
Definition of Marxism - or - shaming Democrats into reality

October 6, 2010
Have you been in a "dialectic debate" (a-hem) an argument with a Democrat or other self-described non-"right-wing-nut-job" lately, about the fact that America's progressive-dominated Democrats are, by the fruit of their labors, Marxists? They are good to have and I recommend them — especially because the best kind of argument has two characteristics: it leads to the truth and it is brief. 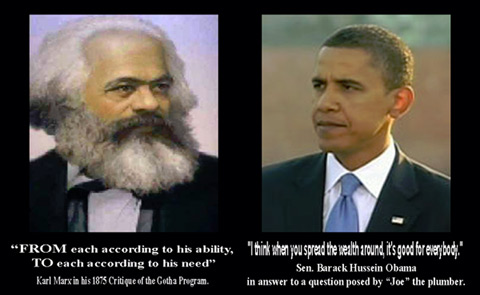 From DeathbyaThousandPaperCuts.com
By the way, when you have such a discussion, you may choose aforehand, to soften the blow by substituting the term neo-Marxist, or give it more impact by using communist. Your choice for effect, but the meaning is essentially the same.

I have had a taste of this kind of argument and it seems a pattern is developing: the victim of progressive education in the discussion tends to ask one or both of these questions:


Do you even know what a Marxist is?

Have you even read Marx?
That is enjoyable to hear, because it lays the questioner open to the sword of truth and thus, victory. If you don't get one of those questions right away, try to draw them out. If you get the second, use it to get to the subject of the first. For example, you can say, "Yes, and do you know what Marxism is? It's pretty basic...."

Also, by the time the victim asks one of these two questions, he already signals the defeat of his argument by his recourse to personal insult and curse. Perhaps the nicest thing you, the truth teller here, are accused of being, is an ignorant "ideologue" (as if gaining a comprehensive belief system with a consistent core were intellectually invalidating). And what is his dead giveaway, that you are such an ideologue? Merely that you would dare to slander the reputations of those on the (intentionally vague) "left," with even a mention of the M-word (or the C-word).

So, when you are thus insulted you can feel good not only in recognizing the victory signal, but that in reality, such words coming from one indoctrinated by Marxist progressivism are synonymous with "defender of authentic American Sovereignties and freedoms." To be kind, you may wish to let the adversary know that this is what he is actually saying and then, thank him. Here, a pat on the back may or may not be fitting and you can decide.

Such insults signal the defeat of the adversary's argument and those questions assure its loss, but the only way the arguer would truly lose is by failing to learn from the discussion.

No worries, we don't have to read much, to understand.

I do suggest reading enough of Karl Marx, to gain an appreciation for his obfuscation of reality. His feats of confusion are accomplished by means of a nearly hypnotic tactic of building overly complicated constructions of warped abstractions, upon... false premises. And if you want further concentrated doses of the same, to induce more immediate laughter, read some of the opera of George Soros.

And in such explications, as those of nearly all the enlightened "left," one begins to wonder at which points in his philosophical and political expressions, such a social Darwinist/Marxist theorist is fulfilling the role of the hypnotized dupe and at which, the hypnotist-duper. My own observation is that the latter is always, already the former, unbeknownst to himself.

Getting back to the argument with the duped defender of Democrats, one nearly always finds it difficult-to-impossible, to get this charmed apologist to see his own intellectual errors through discussing the issues and the positions of the various hot politicos of the moment. However, his invective challenge can be used, to quickly face him up to the essence of the matter. And here is precisely where the question, "Do you even know what Marxism is?' lays the victim open. (Oh, not to worry about harming him, I don't mean victim of your argument, I mean he's already a victim.)

At that point, I suggest you face up the duped defender of "the left" to an apt dictionary definition of... Marxism. And here is one, by Merriam -Webster.

the political, economic, and social principles and policies advocated by Marx; especially : a theory and practice of socialism including the labor theory of value, dialectical materialism, the class struggle, and dictatorship of the proletariat until the establishment of a classless society

At that point, expect to see the progressivized arguer cease anything that could be called discussion. He may do so by hurling more insults, or by acting as if he has suddenly been distracted by a more pressing concern (or both) or he may just sort of "draw a blank," but the argument is likely to end there.

I suggest there will be two reasons for this being his argument ender. Either the duped Democrat defender will not know what these terms mean, or he will see himself in the mirror and notice this way of looking at society draws his own sympathy. Oops. The funny thing is, he will not be prone to explain how Democrats (or "the left" or "progressives") are very averse at all, to this set of views. And here, my dear reader, I hope you are not wondering why.

One caveat: he may argue that the Democrats are for... democracy, not dictatorship! Then, all you have to do is agree with the arguer, post victory, the point being that a fatal democracy of majority rule is what Marx means, by dictatorship of the proletariat.

Try it and see. Feel free to tell us how it went.

Progressives hate it when words convey their true and original meaning, but it is good for them, as with anyone else. 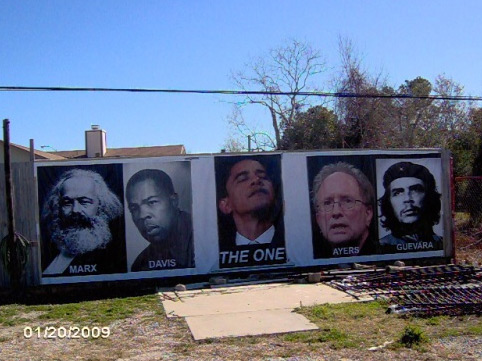