Arlen Williams
Sunday, 1/23 may be make or break for Venezuela (and eventually, America)

January 19, 2011
It could bring a new birth of freedom, or an atrocity worse than Tienanmen Square.

Over this past Christmas season, a hardcore, totalitarian mixture of Marxism and fascism (hence, Marxofascism) has been forced upon a nation in America's hemisphere, a nation of great strategic importance. 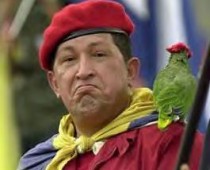 This nation is Venezuela, though even a doggedly observant newshound may not have caught a whiff of it.

Even so, this coming Sunday, January 23, Venezuela's courageous citizens need, perhaps desperately, the massively focused attention of Americans and of the entire world. Will the whole world be watching?

If they get that attention, it may mean the Venezuelans' key to freedom and perhaps a turning point in the renewed, worldwide soft war against freedom and sovereignty, by the globalist, Marxofascist complex. Yes Virginia and District of Columbia, there is a vast globalist, Marxist/fascist conspiracy. Just call it "the beast," to use the term the Bible provides for such machinations.

The beast in this case has apparently applied the tentacles and fangs of Cuba, FARC, Iran, and Russia, to come to the aid of Hugo Chavez, after his party lost the overall majority vote in Venezuela's parliamentary elections, September 26, 2010. And it becomes increasingly apparent, this beast includes others, even the American administration of Barack Obama.

While the majority voted against Chavez' party, they maintained a majority in their parliament. This vote signaled the potential failure of that governing majority to sustain itself. Their solution was to relinquish authority to Chavez by a very broad enabling act, granting him dictator status. [link]

By Christmas time, the Chavez thugs' rallying cry was "Merry Chavismo," as they busied themselves confiscating farms left and right, especially in the relatively successful, freer market stronghold of the Sur del Lago region. [link, link] This is a locality very rich in oil and natural gas, also in increasingly precious agriculture and never mind Venezuelan mouths, the top-down tyrannical regimes of the world are hungry for all of the above.

Chavez' ill-fitting excuse, not wasting even a micro-crisis: his government needed to come to the rescue after alleged chaos following heavy rains. [See the propagana: link.] 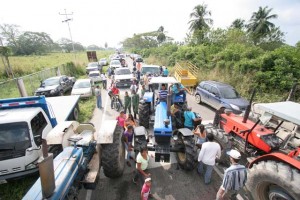 Massive protests followed. Farm machinery was parked on highways, blocking the movement of military confiscators. In one case, thug forces were halted by a ninety-something-year old man, blocking their path. But eventually, for the most part, they accomplished their kleptocratic work, as family and corporate farmers both had their land stolen by Marxist fiat.

As the demonstrations mounted, we are informed, Chavez told farmers that his bureaucrats would review their land rights, if they brought their legal deeds to them. They were stored in a building that was promptly burned. Chavez, not missing a Marxofascist beat, then assented it was arson, but blamed it upon his opposition in the Un Nuevo Tiempo (UNT) party. [link, propaganda: link] This was a move as sensible as blaming the shooting spree of a maniacal fan of Marx and Hitler upon pro-freedom, anti-statist patriots, here in America.

The overall usurpations, constitutional violations, and sundry tyrannical abuses of the Chavez regime read like a Marxist scouting manual. More than a few of them, oddly enough, remind one of efforts attempted and accomplished a bit more subtly or surreptitiously in America, lately.

Immediately, Jorge Cardinal Urosa Savino and the Roman Catholic Episcopal Council of Venezuela were engaged. They were not on the side of communist totalitarianism. [link, link]

According to El Universal:

Cardinal Urosa Savino said in a statement that Venezuelan President Hugo Chávez and his government are disregarding the Constitution and "want to impose a Socialist-Marxist system in the country to control all sectors. This system is totalitarian and is leading to dictatorship; not to proletarian dictatorship but to dictatorship led by the elite who is ruling the country."

He stressed that attempts at leading the country to this system of government opposes to the wishes of the Venezuelan people who already rejected the implementation of a socialist system in previous elections.

"The government wants to impose a Marxist regime through unconstitutional laws, as the president has proclaimed," Cardinal Urosa said.

He criticized government attempts to "control all production means through gradual monopolization of imports, distribution and marketing of foodstuffs." He said that this position is "in line with the purpose of dismantling the domestic production system. The aim is to make people depend on the government to eat."

The very critical rally this Sunday

Anti-dictatorship activist, Ulf Erlingsson has been documenting the totalitarian doings surrounding Venezuela. Items from his blog have been featured in Gulag Bound and we interviewed him on "Gulag Night," Thursday, January 13th. [link] He describes the event as follows.

On the anniversary of when the people of Venezuela threw out the last dictator, January 23 (Sunday) they take to the streets again to protest against dictatorship. There will be sympathy demonstrations in some 30 cities around the world, including Miami.

The reason for holding this rally is not only the anniversary, but also the unconstitutional laws that have been implemented to deny any power to non-chavista parties, even in jurisdictions where they actually won the elections. There is no judicial separation of powers (e.g., judge Maria Afiuni is in jail without trial because Chavez didn't like her verdict in a case); there is no legislative separation of powers (the lame duck Congress granted Chavez the right to rule by decree); and there is no local democracy (all state and municipal elected bodies have been replaced by "communes" answerable only to Chavez).

Furthermore there is media and internet censorship, and rampant confiscations of private property, both firms and farms. Rather than to use the oil wealth to improve conditions in Venezuela, Chavez is using it to subsidize the dictatorships in Cuba and Belarus, and he is apparently bribing the politicians of Bolivia, Ecuador, Nicaragua, and Honduras, to change also their constitutions to allow for perpetual reelection of the president. Being an ally of Ahmedinejad and Putin, and spending heavily on armaments for a high-technology war, he is clearly setting the stage for a conflict with the United States.

The main event is of course in Caracas, from 9:30 to 11:30 AM ET. You can follow what happens there on Twitter, e.g. using the #freeVE hash tag.

Flyers promoting and further describing these events may be found here: [link].

Examples of signage suggested for the demonstrations include these, from contraunadictadura.com or againstdictatorship.com.

The signs may look child's play, but that belies the danger and the courage to be required in Caracas, Sunday. During the aforementioned Gulag Night program, writer and researcher of the communist movement, James Simpson, explained that trustworthy connections of his relate that freedom activists in Venezuela, being rivals of Chavez totalitarianism, have already begun to be "disappeared."

In large part due to the potential totalitarian thuggery that may ensue, the nonviolent demonstrators are urged to bring cameras and Internet activists that do still have access will be reporting at the Twitter #FreeVE hashtag, as well as posting photos and videos. Some may also tweet using #Venezuela or simply #VE.

"The whole world watching?" — the whole world of Marxofascist controllers must begin to be outed, using their support of Hugo Chavez, the little thug with the big mouth, as focal point. We start with the following.

The big chill — why the cover up in America?

The American news media, whether liberal, status quo conservative, or in-between, have been ignoring this "huge story" to an astounding degree not seen since the Obama eligibility problem was so oddly squelched, at the time of his 2008 election and its certification. [link] Apparently, media bosses and their political friends of allegiance to the Aspen Institute, Council on Foreign Relations, Trilateral Commission, Bilderbergers, and whatever other Beastbunglers do not wish the Venezuelan liberty movement noised up. Could this be one of the reasons (emphasis ours)?

Among the agreements, Venezuela's state oil company Petroleos de Venezuela SA said the South American country was forming a joint shipping venture with Iran to aid in delivering Venezuelan crude oil to Europe and Asia. It said in a statement that the agreement for a joint venture also would help supply Iran "due to its limited refining capacity." [AP article, 10/21/2010, link]

Lions and tigers and bears do poop in the woods and globalists do favor Marxofascist Europe and Asia — and their not so little central banks too, Toto. Do you think it odd that Chavez and Ahmadinejad are both calling for a "New World Order," opposed to America's freely enterprising influence? That is in this AP article, too. It is a lot more than just George Soros, Maurice Strong, Rockefellers, Obama and Geithner's parents' employer: the Ford Foundation, the Rothschilds, and a few other "philanthropists" working that agenda. Now, it appears a globalist deal has been cut for these two nations.

In a subsequent article, but very shortly, we intend to point out more of the global-Marxofascist alliances and dynamics involved with Chavez' Venezuela. 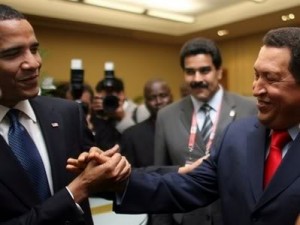 For this moment, understanding their oil trade as these two tyrants' ticket to the New World Order, it becomes much less mysterious that the newly inaugurated Obama was so unsupportive of the 2009 freedom movement in Iran, just as with Venezuela (and Honduras). And understanding this, clearer yet become the Obamunist moves with Deepwater Horizon, George Soros' Petrobras, and their crippling of America's oil industry in the Gulf of Mexico. Bill Ayers' friend Chavez, up; American lifeblood down. [link] Friend of Farrakhan and New Black Panthers, Ahmadinejad up; friends of freedom around the world, such as Israel, down. [link]

Are we keeping score, here at home?

On the home front, where we are to defend against "enemies domestic," one needs to pay attention to what the Obama regime is doing and not so much, what comes trippingly off the teleprompter. No, we cannot shoot this beast (in case Marxstream Media Matters gives a read). That would be a horrible thing on numerous levels, but we have to use all the moral tools in the Constitution's kit, plus warily watch here in America, and watch the world.

Watch Venezuela, this weekend. And pray — and tell your neighbors who need to know and would like to pray too, for the true peace of God accountable freedom. It will be Sunday, after all.

The lives and essential liberties of all of Venezuela may depend on it. Yours too.