But, why take it from me? This is how it works, from the financial oracle of the "progressive" movement: 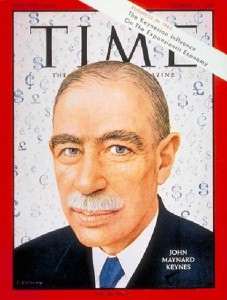 Lenin is said to have declared that the best way to destroy the capitalist system was to debauch the currency. By a continuing process of inflation, governments can confiscate, secretly and unobserved, an important part of the wealth of their citizens. By this method they not only confiscate, but they confiscate arbitrarily; and, while the process impoverishes many, it actually enriches some. The sight of this arbitrary rearrangement of riches strikes not only at security but [also] at confidence in the equity of the existing distribution of wealth.

Those to whom the system brings windfalls, beyond their deserts and even beyond their expectations or desires, become "profiteers," who are the object of the hatred of the bourgeoisie, whom the inflationism has impoverished, not less than of the proletariat. As the inflation proceeds and the real value of the currency fluctuates wildly from month to month, all permanent relations between debtors and creditors, which form the ultimate foundation of capitalism, become so utterly disordered as to be almost meaningless; and the process of wealth-getting degenerates into a gamble and a lottery.

Lenin was certainly right. There is no subtler, no surer means of overturning the existing basis of society than to debauch the currency. The process engages all the hidden forces of economic law on the side of destruction, and does it in a manner which not one man in a million is able to diagnose.

In the latter stages of the war all the belligerent governments practiced, from necessity or incompetence, what a Bolshevist might have done from design. Even now, when the war is over, most of them continue out of weakness the same malpractices. But further, the governments of Europe, being many of them at this moment reckless in their methods as well as weak, seek to direct on to a class known as "profiteers" the popular indignation against the more obvious consequences of their vicious methods.

These "profiteers" are, broadly speaking, the entrepreneur class of capitalists, that is to say, the active and constructive element in the whole capitalist society, who in a period of rapidly rising prices cannot but get rich quick whether they wish it or desire it or not. If prices are continually rising, every trader who has purchased for stock or owns property and plant inevitably makes profits. By directing hatred against this class, therefore, the European governments are carrying a step further the fatal process which the subtle mind of Lenin had consciously conceived. The profiteers are a consequence and not a cause of rising prices. By combining a popular hatred of the class of entrepreneurs with the blow already given to social security by the violent and arbitrary disturbance of contract and of the established equilibrium of wealth which is the inevitable result of inflation, these governments are fast rendering impossible a continuance of the social and economic order....

— John Maynard Keynes, a man who himself, was a proponent of inflationary policy and as history shows, knew something about debauching and being debauched, from his book,The Economic Consequences of the Peace, 1919

What Keyenes noted a Communist of the Russian Revolution "might have done from design," George Soros and the cartels and yes, conspiracies of which he is front man, do from design. And they are having their biggest engineering party this weekend.

The following is an update from my Sunday, April 3rd, article at Big Government.

What would you think if George Soros were organizing his fellow anti-American, globalist, neo-Marxist "thought leaders," in pursuit of globally governed banking and finance, in another Bretton Woods conference? 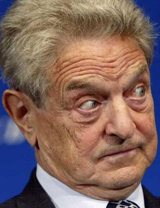 Would you consider that their goals include dragging American influence and incomes down, while confiscating much of our personal finances and giving them to other nations (and yes, the age-old financier network behind them) in the name of "communitarianism?"

Would you find their goal is to replace the bad influences of the IMF and the World Bank, with a much worse, more powerfully controlling, post-American global apparatus?

What would you think, if that meeting were being held this April 8th through 11th?

Would you do a quick reference to what the Book of Revelation says about worldwide control over currency, beginning in Chapter 13? (Hint: look for key words "buy" and "sell" and "merchants" and "mark.") Now, that is not to purport these are the very end of days. What must be considered is that the spiritual forces invested in the people invested in Soros are trying hard to preempt the completion of God's plan of a big, full world's hearing the truth, however tremulous it may also become, then. Meanwhile, it is the duty of the righteous to oppose unrighteousness, even as necessary, by warfare against their warfare.

I got an email, a few days ago; it was Tuesday the 22nd. It was from George Soros. To hear as straight from the dragon's mouth as feasible, I had subscribed. In this emailed article, he lamented the inequities of wealth among the nation-states of Europe, under the strains of their continuing insolvency crisis. He warned of the dangers of national interest. Rather, he proposed, not surprisingly, a further blowing of the global insolvency bubble, so the more indebted European nations may get along owing, while their lending nations get along being owed — all the while, blending and worsening the financial and monetary crises and spreading this yeasty recipe further throughout the world, especially to America.

That was quite provocative.

Please be patient to let this article be a rather personal narrative and a kind of portal, and follow its links. Then, follow the links within the those articles. Perhaps, even one more layer. That will limit the redundancy involved and inform you as well as a book might, but in much less time. To begin, here are my observations upon receiving his email, "Oh. My. George. Soros on Europe's Worsening Banking Crisis & the Most Evil Plan Yet." Go ahead. Big Government will generously wait.

"'Most evil plan yet,' was that an overstatement?" I wondered. No, knowing what one may see about Soros, it was not hyperbole and the statement was well with my soul. The next day, confirmation came from Dan Gainor of Business & Media Institute and Media Research Center, by his "Unreported Soros Event Aims to Remake Entire Global Economy," first published in Business & Media Institute and at Fox News.

If you read nothing else stemming from this introduction, do peruse that. There, Gainor puts this iniquitous plan into context and elucidates. Nope, not going to excerpt, nor even quote. Just read it if you have not by now, please.

It was my privilege to interview Dan in the next Monday's "Gulag Night," for about a half-hour. That discussion may be found here.

Again, no reiterations offered, except that I will repeat that the documentation shows we were raped by European banks, in their own, deep insolvency trouble in 2008, using us at exactly the time it hurt us the most — during the Mortgage Meltdown's peak, right before the general election. You know how that went. (It was also swept along as in the sport of curling, by peculiarly timed internal operations, including those of Soros comrades, Herb and Marion Sandler, and Senator Charles Schumer's tongue. One must not distract further, by going on about the Community Reinvestment Act(s), Franklin Raines and Fannie Mae, the Pelosi Congress and their shoot-to-miss regulations, Goldman Sachs and friends, etc.)

That being our reminder of how they operate, what may we expect from our nation's finances being thoroughly and systematically controlled by a megacartel of despotic foreign interests?

Should not members of the United States Congress be speaking up about this?

Be sure to read each bullet point, then the remainder of Mr. Klein's article:

"Which Soros Event Will You Attend This Week? — Lefty billionaire funds conferences to 'change the world,' economy and media," Dan Gainor in Business & Media Institute, 6/6/2011

"Federal Reserve, the Enemy of America"

"Did China or Jihadists try to bankrupt America? Pentagon report reveals financial terrorists may have triggered economic crash — Two mystery investors 'were number one traders in all financial companies that collapsed or are now financially supported by the U.S. government,'" in Mail Online, 3/2/2011 (h/t: Julio Ray)

See the observations of compatriot blogger, Maggie Thornton and the related articles she links at the bottom of her piece:

And keep coming back to this site.

Three caveats about this subject matter

1. Yes, this is anti-American and grossly evil. It is warfare against our People. America has been given us at great sacred cost, to preserve and pass along our freedom to our progeny. Just as our Constitution rests squarely upon our Declaration of Independence, our freedom rests upon our personal, intra-national, and national sovereignties. There is no exception to this rule, whether it is assailed by any seemingly altruistic ideas and ideals of global governance, or of global finance. And even the most generous offerings of internationalism require its antecedent, nationalism.

2. One must neither be taken with, nor be deterred by any coincidences of ethnic heritage, when studying banking, globalism, and collectivism. While antisemites will at times present lies and distortions as facts, facts by their nature, can not be prejudiced nor bigoted. Each individual is a free and ontologically equal, moral (and immoral) agent, all are sinners, all are offered redemption.

3. Come, let us be conspiracy investigators, regardless of the connotations and prior concoctions. I suggest you start, or start afresh, with the startling and paradigm shifting research led by a gentleman named Norman Dodd, an energetic but humble young banker from the prior century, who eventually found himself going to Washington and working for Congress. (Much of the records of the Reece Committee have been destroyed, hidden, or buried, but they are still preserved.) If you saw Glenn Beck's TV program last Friday the 25th, about the Federal Reserve, you will recognize Mr. Dodd's interviewer.

One reason there are so many wild claims in this subject matter is that not enough people of discipline and sound epistemology engage in it. But remember your Alinsky and do not be intimidated by ridicule. There is a vast, worldwide conspiracy shown a few inches from your nose right now and many near the core of it meet next week in New Hampshire. 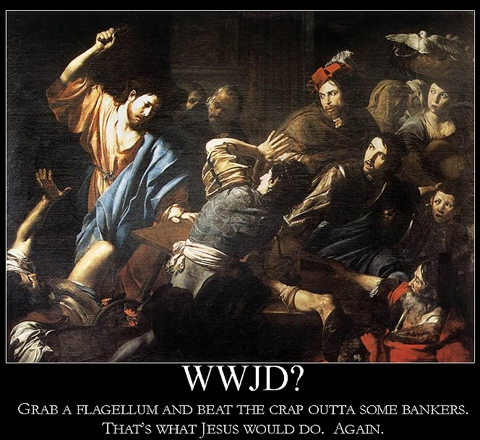