July 2, 2011
Constitutionalist activist, Dean Haskins provides a lesson instructing that a "natural born Citizen," according to the United States Constitution, Article 2, Section 1, is an individual born in United States territory, to parents who are both U.S. Citizens.

Further, he introduces the viewer to the Supreme Court case of Minor v. Happersett, which recognized this and thus established binding precedent, the adjudicated recognition of the meaning of the phrase "natural born Citizen" in the Constitution.

"Never before, in the history of the America, have our leaders been so afraid of the rule of law, but the rule of law is what has made this country. If we allow them to shirk their duties in this matter, then the rule of law will be rendered of no effect and our country will soon go the way of every other country that succumbed to fear," observes Mr. Haskins. Fear of what, though? Of being found out?

To bring us up to date, eligibility attorney Leo Donofrio has written of the significance of the Minor v. Happersett decision in his blog, Natural Born Citizen:

"US Supreme Court Precedent States that Obama is not Eligible to be President," June 21, 2011

"Minor v. Happersett is Binding Precedent as to the Constitutional Definition of a Natural Born Citizen," June 24, 2011

The Supreme Court in Minor specifically avoided construing the 14th Amendment as to the issue of whether Virginia Minor was a US citizen. Instead, the Court looked no further than the natural-born citizen clause in Article 2 Section 1. The Court held that Minor was a member of the "class" of persons who were natural-born citizens. They defined this class as those born in the US to "parents" (plural) who were citizens. (For more detailed analysis of this issue, see my two previous reports, here and here.)

The Court also noted that the "citizenship" of those born to non-citizen parents was subject to doubt. Since Virginia Minor was in the class of natural-born citizens, that doubt didn't need to be resolved. The Court exercised judicial restraint and thereby avoided construction of the 14th Amendment as to the citizenship issue.

In the first of these entries, Donofrio quotes the dicta of the Minor v. Happersett ruling and this is the passage that establishes the precedent as to the meaning, understood at the time of the Constitution's framing, of "natural born Citizen," emphasis added.

"The Constitution does not, in words, say who shall be natural-born citizens. Resort must be had elsewhere to ascertain that. At common-law, with the nomenclature of which the framers of the Constitution were familiar, it was never doubted that all children born in a country of parents who were its citizens became themselves, upon their birth, citizens also. These were natives, or natural-born citizens, as distinguished from aliens or foreigners. Some authorities go further and include as citizens children born within the jurisdiction without reference to the citizenship of their parents. As to this class there have been doubts, but never as to the first. For the purposes of this case it is not necessary to solve these doubts. It is sufficient for everything we have now to consider that all children born of citizen parents within the jurisdiction are themselves citizens."

Another attorney who has been very active in this matter, Mario Apuzzo, also elucidates the matter at his blog, Natural Born Citizen — A Place to Ask Questions and Get the Right Answers, where among other things, he takes the tainted site Snopes to task for its inaccuracy and seeming bias.

Prior to these, the most comprehensive research and analysis displayed in any pertinent article I have seen has come to us via "The Meaning of Natural Born Citizen," (September 6, 2009). That is the work of a collection of activists and law students calling their site Undead Revolution, referring to the continuous presence of our founders' specifications of our government — truth which haunts those who would deny this reality. And there are more nuggets there, besides Minor v. Happersett.

But just lately, as if on cue, the U.S. Senator from Illinois Richard "Dick" Durbin has issued an oral report of the absurdity of the progressives' stance on the matter of eligibility for the presidency. He speculates that an illegal alien granted amnesty may one day become our president.


Video, "Democrat Senator: Illegal Alien Could Be Our Future President," June 29, 2011
Even RealClearPolitics, with their history of editing out information on the matter, achieved clarity on that apparent gaffe. But was it a gaffe? Not for the progressive, who by definition, wishes to "fundamentally transform" America, by "progressing" beyond the established charter of our Declaration of Independence and compelling governmental design of our Constitution.

We now live in an America with not only an anti-American president by his behavior, but by his autobiography, a fictitious one. Our Congress is complicit, by its failure to abide by the Constitution, or to even seek to do so, at the time of his confirmation. There were no challenges as constitutionally provided. Do we have a Supreme Court which has the integrity to correct this, or in its failure to do so, or thus far to even observe the constitutional standing of the Sovereign U.S. Citizens who have brought this crisis to their attention, does it also invalidate itself?

Three strikes and America's entire federal government is out. 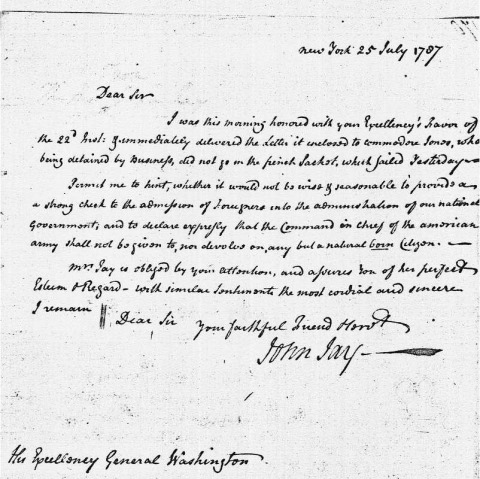 Letter to George Washington from John Jay regarding the insertion of the "natural born Citizen" clause into the U.S. Constitution, "Permit me to hint whether it would not be wise and seasonable to provide a strong check to the admission of Foreigners into the administration of our national Government, and to declare expressly that the Command in chief of the American army shall not be given to, nor devolve on, any but a natural born Citizen."