July 20, 2011
This is a critically important milestone, or at least it must be, for members of the United States Congress, in confessing what they know to the American public. You may recall Representatives Broun in November of 2008 and Bachmann in March of 2009, pronounced the words, "Marxist" and "Marxism," respectively, in describing Barack Obama and his ideology and objectives. They were then compelled by someone(s), possibly John Boehner, or we might say, "the powers that be," to recant and apologize. 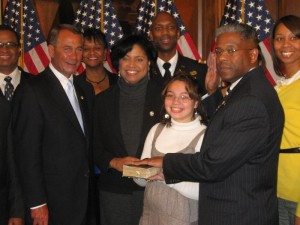 "...I will support and defend the Constitution of the United States against all enemies, foreign and domestic..."
It is those in Congress and the news media who do by now understand that Barack Obama is the saboteur spearhead of America's greatest enemy, the truly conspiratorial, Marxist/fascist global subversion and insurrection assailing us, but who fail to be honest with the American Public, who must get down on their knees as it were and apologize, first to God, then to us.

And immediately, we must get well beyond this point, in the ability of "conservative leadership" to, en masse, show courage instead of cowardice, for we all to have a chance at informing and indeed confronting our fellow Sovereign Citizens with the truth of the Soft War being waged against authentic America. Or, it will be too late and the work of reducing this anchor nation of liberty in the world to a mere geographic sector of tyrannical, global governance empire, will be complete.

In America, the Sovereign People make the fundamental decisions, and our position and freedom are being raped from us with every moment that passes. Those who realize what is going on around us must inform our neighbors — now. If leaders are leaders, they must explain; they must lead loudly and clearly to freedom and by consistent decisions follow through, or they will lead us to ruin.

It is time for truth, or it is complicity in treason.

"But if the watchman sees the sword coming and does not blow the trumpet, and the people are not warned, and the sword comes and takes any person from among them, he is taken away in his iniquity; but his blood I will require at the watchman's hand."


Video 7/18, "Rep. Allen West: Obama is a Marxist; I've Been Racist All My Life According to Liberals"
Read more at The Right Scoop...

I love, love this man and would vote for him in a heartbeat!

The President's concern is about getting reelected. The President's concern is that he is an intransigent, liberal, progressive socialist who is also Marxist because of the class warfare rhetoric that he espouses. And I think that when you heard him on Friday and the more he comes out and talks, the more truly out of touch and incompetent he seems.

He has a vision for this country that is anathema to the vision of the founding fathers and our belief in individual responsibility and accountability and our free enterprise system.