Arlen Williams
The funny things to know, surrounding the new fix for Greece

November 12, 2011
So Greece now has a new Prime Minister and its solution is supposedly coming down.

But what kind of solution? Let us examine some facts, plus some items purported as fact which we need to track down. 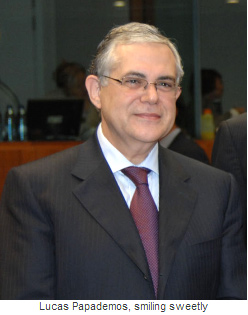 Lucas Papademos was educated at MIT, was the governor of Greece's central bank and was vice president of the European Central Bank (ECB). And now it is rumored that the International Monetary Fund (IMF) may come with the ECB, to their "rescue." Beware the terms, Greece and world.

Greece's crisis has been unnecessary. Europe's crisis is unnecessary. America's crisis is unnecessary and about to blow, hard. They have even been called manufactured and intentionally orchestrated crises. And what will be the result? I have speculated as to what this is likely to be. If you wish to see that, see "A Brief Note on the End of America as We have Known it" and "The Failed State Strategy for 'Progressive' America."

It has also been said that Afghanistan, Iraq, Tunisia, Egypt, Libya — and Poland, all have something in common. Before their wars, revolutions, and in the case of Poland, the hyper-coincidental plane crash of their leaders, they were bucking the world's central bank complex. And afterward, they all, we are told, seem to be knuckling under. Now, that is something to further investigate and report.

The "conspiracy theory" about this began, coincidentally, at nearly the same time the behavior patterns began, in approximately the 1770s. Jefferson, Jackson, Lincoln, and Kennedy fought and warned about it, with increasing failure, as the central bank complex has grown like an amoeba and the foundations they afford finance their dirty "philanthropic" work.

It has also been said the central bank complex was behind Lenin, Hitler, and Mao, and more must be done to scrutinize this "old news," too.

And it is established fact that high level Rothschild central banksters were principal backers of the two most pivotal figures in global neo-Marxism today, George Soros and Maurice Strong. When you see any mention of socialism, Marxism, or fascism, think, we suggest, "control." That is what they all bring — and the wealthiest 1% (of 1% of 1% of 1%) eventually do the controlling, whatever ploy they use, even if it is sentiment against themselves, to gain their control.

And the warning to conservatives, Tea Partiers, and Republicans: they work by controlling and manipulating, much of it through big, pervasive money, much through the sidetracking and channeling of message, in each of two "dialectic" camps. That is their Modus Operandi.

Theories give themselves over to facts, as they are investigated with epistemological discipline. The facts have been coming in, for a long, long time.

Disclaimer: This is not at all about ethnicity and there are many ethnicities involved; do not settle for that ruse, from anyone in any camp.

PS: And it is not breaking that the new heads of the European Central Bank and the proposed new leader of Italy are Goldman Sachs people. Another day, another set of conspiracy-facts to report.