May 18, 2012
The following came careening to the Gulag yesterday by tweet of contributor @OhSuzyQz. It is a video of warfare against America being countered.

Caveat: its producer, Anthony J. Hilder (@anthonyjhilder) is one of the more controversial and sensationalist of those unafraid of the moniker "conspiracy theorist." We view some of his work, including his allegations against certain Zionists, without favor. But Mr. Hilder here shows and briefly participates in a recent hearing of the San Carlos, California City Council, on the subject of ICLEI, the International Council for Local Environmental Initiatives. 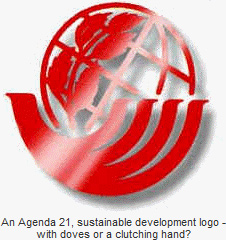 Suggestion: watch and put yourself in the position of a skeptical city council official. Let this be training, because fellow Citizen, you may need to do this very thing, immediately too. Do you? Of the approximately 1,200 towns, counties and other local entities listed by ICLEI in their "membership" worldwide, about 500 exist in America, so far.

See for yourself what is impressive and what may be less so, in these efforts. Catch every minute. Throughout this drama, protagonists cite critical facts, matching them with the human passion of the patriotism of those who experience first hand what it means to fight for one's birthright. In so doing, they put forth the effort to accountably pass our sovereignty intact to future generations.

The meeting is prefaced by an interview with another activist, one who helps people overcome the dangers on numerous levels, of smart meters, by replacing them with the traditional analog variety.


Video uploaded 5/12/2012, "The Crucifixion of San Carlos -
Smart Meters Agenda 21 Iclei & The City," Anthony J. Hilder
Might it have been more appealing for some to have adopted a less strident tone? Probably so. Would it have made a telling difference in this case? Very probably not. Would such a hearing go better if only townies presented? Depends on what they present, does it not?

My main criticism: to be more effective could the residents have looked for the most egregious current or impending problems caused by ICLEI encroachments? If not found in town, then in the nearby area — or at least, in the state (it is California) or if not, then in the nation? Could specific examples of injustice and the violation of rights have been found and described? Could more clear-cut victims be brought in to testify, or prepared affidavits presented?

If such testimonies are prepared and presented in a battery, one after the other, it not only affects the council directly, it also provides red meat to the local news media. The media can be prepared in advance by notice of those testimonies being the centerpieces of the event. And at that point, if enough concerned citizens are summoned, a public demonstration could be held outside the building. All of those factors apply valid and important pressure, with the movement in charge of the central story. It takes planning and development. Meetings must be held by the budding movement in the area. Those involved must be organized. If this begins to sound like what Alinsky community organizations do, one may be reminded that what they do is very well tested and it is effective or it would not be practiced. Also, allies on the council should be found and follow-up steps discussed.

To be fair, maybe things haven't gotten bad enough in town for that kind of show and tell — not yet.

The big picture was presented well, but that was not enough for the antagonists on the council. I like to resist the temptation to transcribe, but what City Councilman Matt Grocott chooses to read (after the 49:35 mark) should startle Americans like Paul Revere in the night. It comes from drafted United Nations documentation, as follows:


"Land...cannot be treated as an ordinary asset, controlled by individuals and subject to the pressures and inefficiencies of the market. Private land ownership is also a principal instrument of accumulation and concentration of wealth and therefore contributes to social injustice; if unchecked, it may become a major obstacle in the planning and implementation of development schemes. The provision of decent dwellings and healthy conditions for the people can only be achieved if land is used in the interests of society as a whole. Public control of land use is therefore indispensable...."


This is also copied here (and perhaps by Mr. Grocott) from the Web, "The UN and Property Rights," written by Henry Lamb, Sovereignty International, copyright, 1997. Our Mr. Lamb's footnote states:


Information here cited is from "Report of Habitat: United Nations Conference on Human Settlements," Vancouver, 31 May — 11 June, 1976, (A/Conf.70/15), personally photocopied from the archives of the UN Library at Geneva, Switzerland, December 6, 1996. (On file)


The ignorant and/or devious Andy Klein at 30 years of age resigned from the mayoralty and council of San Carlos, California, on Wednesday, April 18, according to the San Francisco Chronicle. He cited his divorce and alcoholism as a reasons, according to the Palo Alto Daily News. Klein had been arrested upon suspicion of drunk driving less than a year earlier and was released when his blood alcohol level was found just under the legal limit. 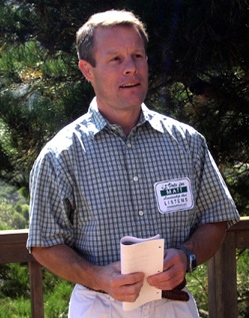 None other than Matt Grocott was appointed interim mayor and this past Monday evening he was unanimously chosen by the council as their new Mayor. By an informal Web poll of the San Carlos Patch that day, he is a popular man in town, having served as its mayor previously. And what will San Carlos do about the infiltration of Agenda 21 mandates, now? The question of whether ICLEI will take root in that town, or any given town, underscores the tenuous nature of relying upon each local governmental authority, to stop this scheme.

Personally, this video reminds me of two other moving pictures. One is a science fiction classic set in the California of 1956 and said to be a parody of the "red scare," Invasion of the Body Snatchers. Such a reference might bring a smirk and a chuckle to Andy Klein. If that was a satire, it is one where the reality it would mock rings out nevertheless, clear as an old town's alarm bell. In our reality, of what was red in the Twentieth Century becoming the UN blue of Century 21, the body at risk is the body politic and the key word from our City Council hearing is "insidious." Unlike that film's victims (sure, click over and watch its end) may we not let ourselves fall asleep and our American society be replicated by an inhuman force.

The other video is infamous to us who have been looking into this force for a few years. It is of Senator and West Virginia carpetbagger, Jay of the banksters' own Rockefellers, seemingly in a near panic, lamenting the outbreak of the Internet and demanding something be done in the guise of "cyber security," to bring it under control.

Let's not allow our intercitizenry news and warning systems to be brought under government control, through the dark ops of intelligence agencies bent upon Global Governance 2025. Rather, Take control — the control vested in you by our Creator, according to our national charter. You are the princes of this principality, United States Citizens. As surely as the freedom of the press and the right to bear arms — and property rights — must be walled off from the powers of government, so also the control of our Internet communications. As the Californian mentioned, elections should be won or lost upon such issues.

These local battles, as shown in a city of California must be won, council by council, throughout our nation. The decentralized ground war being waged against us is there for the overcoming. This must be met with another phase, of concerted action on the federal level, and both efforts need to coordinate like a pincer move — then once victorious, remain resolute and circumspect in "eternal vigilance." If you would like to see a very good way to contribute to the work of doing just that, come see the Sovereignty Campaign — SovCam and our Mission for 2012.