May 29, 2012
We all have an innate need to find one person and call him leader. As the story many of us know goes, we are made for an intimately dependent relationship with God Himself our Father; but mankind failed to live up to its part and that need became tragically unfulfilled. While God in turn made a Great Sacrifice to meet our need, much of one's sense of its fulfillment is yet a prospect awaiting its future. 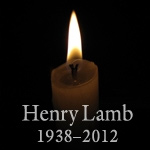 That prospect and Henry Lamb came face to face last Wednesday morning, May 23rd. Now, those compatriots who knew him or at least knew of him must suppress all the more, such desires for an earthly king, or a captain of our vessel. More than ever, all of America's Sovereigns must each learn to take on his accountable role, to lead our nation securely into its own sovereign future.

Many more than I will say he was preeminent in the work to keep our free and independent nation from returning to its former status of colonization by tyrannical global empire. His chief work was to alert us against the usurpation of our rank and rights via the monstrously insidious "think globally, act locally" strategy of U.N. Agenda 21 and sustainable development.

He was unafraid to call out Americans of the subversive Marxist and fascist kinds, from the schemes of Woodrow Wilson's administration to the likes of Barack Obama, who tries to bring them to completion. He decried Obama's Executive Order 13575, establishing a national Rural Council and the regional councils of ICLEI (the Russian word for such governing bureaus is "soviet"). But not stopping there, Mr. Lamb went to Manhattan, too, in his "United Nations at 65."


Obama and his team bring an even stronger admiration for the United Nations, and determination to subject the United States to global governance. He went to Copenhagen to personally try to seal a deal for the Kyoto Protocol. He wants the Senate to ratify the Convention on Biological Diversity and the Convention on the Law of the Sea. He is participating in the G20s efforts to create a mechanism for controlling the global flow of currency, and has said nothing in opposition to the development of a global currency.

For sixty-five years, the U.N. has publicly abused the world's poorest and most vulnerable people, while almost without public notice, building its own power through a global web of international laws, regulations, and recommendations. The U.N. paints itself as a noble institution, redistributing the wealth of the West to the needy elsewhere — while raking off an administrative fee and scamming whatever else they can.


I looked for an obituary which might have referred to any of that, this Memorial Day afternoon and found nothing at all, in local or regional newspapers online. I did find only the basics, from a funeral home in Huntington, Tennessee. 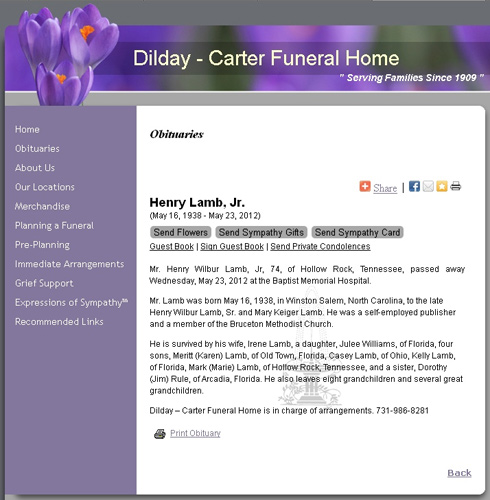 Mrs. Lamb told me by phone that she is grateful for prayers, for her family. Also, that there was to be no memorial service and that his remains were to be cremated. More about their shared history may be found at rangemagazine.com's "The Lambs Who Track the Wolves," by Floy Lilley, also of Sovereignty International. I highly recommend it. If one wishes to send a memoriam gift, it has been requested to send it to that organization he founded and chaired: Sovereignty.net.

Along with WND, Renew America, Canada Free Press, and others, Gulag Bound has featured many of his articles, since its inception. There is more and we will resume. Henry had a gift for revealing the United Nations' ground war on America and the world. He presented it from the ground up, starting with basics the reader already knew. Then he explained such critical problems as its encroachments upon property rights, livelihoods, rights of commerce, and upon our constitutional self governance, up the scale to the violation of our national sovereignty and the initiation of plans for depopulation and people herding of a kind previously unshown outside of dystopic novels and films. All along, he was careful to cite evidence and recite the very words of our ideological enemies fast at work in this conspiracy fact.

Sometimes one finds a person who gets there first, to important knowledge and is among the first to tell of it, but he shows he is not one to best deal with it. Thankfully, we find others treating such matters better, who come along after. Unfortunately, some may at times distort truth from the beginning, getting to us first with the worst. Henry Lamb was first and best.

But we have the body of Henry's work and may realize what he has done for us and for decades. At such a time, one may consider the opportunity to recite his own few communications with such a leader and exemplar. I will only say that I will do some of that where I see it will be helpful, but not here and now.

It was enjoyable putting this together, recently; it featured our senior Citizen statesman along with three other champions of the cause, "Four Heroes Countering Agenda 21s Ecofascist Warfare," May 13, 2012. Turns out it was three days before his last birthday.

I found Henry to be very personally concerned and kind. He was very careful to be true and accurate, whether about observables, or about the authentic American vision, or about the corrupt and subversive doctrines which threaten our demise. He took the responsibilities and rights of a sovereign, free moral agent of God upon our Earth personally. He was attentive and cordial about doing the work of a custodian of the American birthright. After speaking with him, one looked forward to the next time and hoped to meet his approval. Very much.

I thought these last days, of Walt Whitman's poem, "O Captain...." Alas, within two lines one sees its setting does not correspond to this moment at all.


O Captain! my Captain! our fearful trip is done;
The ship has weathered every rack, the prize we sought is won;


This Captain was taken during the heat of our nearly silenced struggle and there are many hard things left to do in this soft war. The journey seems yet long and we must finish building our ship even as it sails. But our Captain Lamb has charted us a true course, and that we may follow without reserve and if necessary, each until his own last full measure of devotion.