July 20, 2012
The long sought Supreme Court verdict on Article 2 of the U.S. Constitution has just been announced. Eligibility activists have finally forced the SCOTUS to tell us how U.S. Presidents are to be elected. Experts declare this a landmark ruling. Never before have the words in Article 2 ever been defined — not even to their authors. 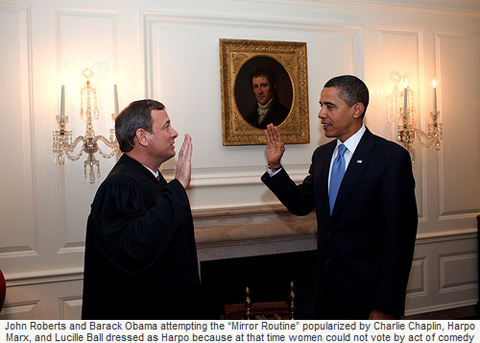 The Supremes voted 1-8, with Justice John Roberts again casting the lone, deciding vote. America's Got Electoral Talent! — it is.

According to Roberts' interpretation of the Constitution, on or before Tuesday, November 6, America's voters must each sing along with his personal-favorite folk/rock oldie, "Reason to Believe." Then, they must email their PC-recorded renditions to America's Got Electoral Talent! — a replacement for the Electoral College — where they will be digitally combined, or "mixed," one version for Barack Obama, the putative president, and the other for Mitt Romney, the long presumptuous GOP nominee.

Roberts determined each eligible after a wild all-nigher with both candidates and their Secret Service contingents, pronouncing in his decision, "It is not the duty of the Supreme Court to protect people from the consequences of their parties."

Researchers indicate this will be the world's first Mass-Karaoke Sing-off Election, performed as serenades to one's chosen candidate.

Democrats have immediately chosen to sing the famous Rod Stewart version to Obama, in keeping with the overall theme of a world-popular, non-citizen arrangement:

Republicans' rendition to Romney will be sung based upon a recording by the song's composer, Tim Hardin, this selection, as GOP spokespersons explained, meant to signify heart felt lip service to the doctrine of original intent:

The collective serenade judged "the greater act put on by, put out by, and put over on the People" will elect our next President. The America's Got Electoral Talent! judges will consist of only the hearing disabled, a safety measure intended to guard the security of the listeners' rational minds, according to the DHS, which has purview in this matter, as in all matters within the United States of America and half the London Olympics.

Justice Roberts explained in his decision that while the Constitution is clearly too outdated to be understood by 21st Century sensibilities, the actual rules for presidential elections were spelled out in an only recently discovered cross-referencing of page 1,386, page 329, page 522, page 1,923, and and page 9, of the 2010 Affordable Healthcare Act (officially and alternatively called the Affordable Care Act, the Affordable Healthcare for America Act, or RombamaCare) — plus some notes of then Speaker Nancy Pelosi, hand-written after the bill was passed and stapled onto the second to last page, which explained the whole thing.

After America's Got Electoral Talent! makes their determination, it will be certified for the first time, not by Congress, but by, if we can read Pelosi's scrawlings correctly... "the 15-Member Constitutional Death Panel."

For further reading and to get into the spirit of the song, we recommend the following Web searches:

Singers must remain seated during their performances, as an acknowledgment of having no standing concerning the eligibility, nor indeed, the overall selection of their presidents. They may also be groped, but must be Webcammed during the song, to verify their seated status; citizenship not required; only one singing ballot recommended per person, to guard against Post-Traumatic Election Disability (PTED) among voters; any new computer equipment obtained for these purposes may be purchased only with ICLEI-approved, triple-bottom-line financing according to United Nations Rio +20 non-binding mandates.

Lyrics are as follows, for purposes of rehearsal.

* All oral ballots replacing this line's ending with "to be taxed,"
or "to be mandated" will be disqualified.

** Please try not to actually cry, as this may affect the quality
of the overall orchestration of the presidency. 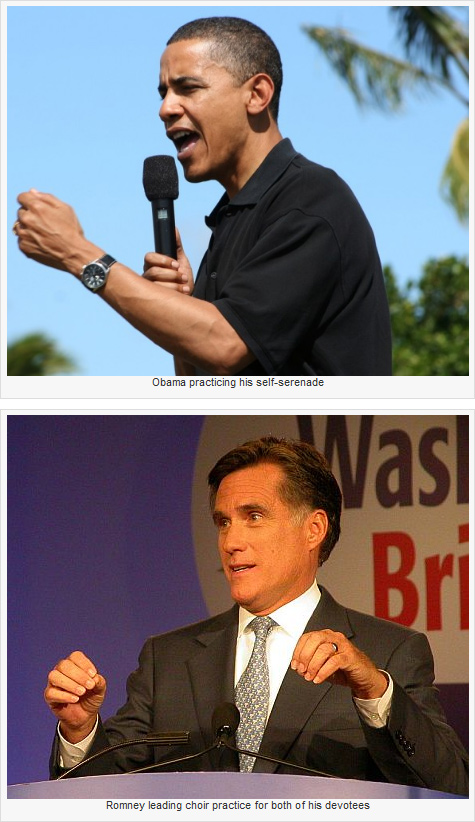