August 6, 2012
In previous elections, we have suspected the Democratic Party of suppressing the votes of members of our military who are giving their lives to America, overseas. Here is smoking gun evidence, now.

They cry "voter suppression," when the People make efforts to guard our sacred voting process, by validating that duly registered citizens are the only ones voting and that it is done only once per person. Yet they show themselves as guilty parties, even suing to suppress the votes of the ones to whom we are most obliged to reach out. We must take such pains for our overseas military, in order to overcome blatantly obvious obstacles inherently generated by America's government itself, where it reaches out to put certain of our People away from their home states and into harms way.

Is there anyone who still refuses to see that Obama is the figurehead of a gang of treacherous (anti-American, neo-Marxists) saboteurs nurtured and developed to be just that?

In the Columbus Times & Democrat by the Associated Press:


COLUMBUS, Ohio (AP) — Fifteen military groups are opposing a federal lawsuit in Ohio brought by President Barack Obama's campaign because they say it could threaten voter protections afforded to service members, such as the extended time they have to cast a ballot.

Obama's campaign and Democrats filed the lawsuit last month against Ohio's top elections official in a dispute over the battleground state's law that restricts early, in-person voting during the final three days before Election Day.

The campaign, the Democratic National Committee and the Ohio Democratic Party contend the law unfairly ends in-person voting for most Ohioans three days earlier than it does for military and overseas voters.

Attorneys for the Democrats argue such "disparate" treatment is unconstitutional, and all voters should be able to vote on those days.

The military groups say federal and state law recognizes that service members need extra time to cast their ballots. They say they fear the precedent that could be set if a court finds that military voters shouldn't be treated differently than other voters.

"Efforts to facilitate and maximize military voting should be welcomed, not viewed with constitutional suspicion," the groups said in a court filing that seeks to intervene in the case. 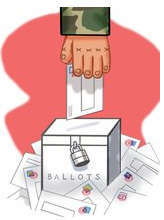 Editorial in the Washington Times:


President Obama goes out of his way to appear to support the troops. But when it comes to voting, he would like to keep them out of the fight.

The Obama for America Campaign, the Democratic National Committee and the Ohio Democratic Party are suing the critical swing state of Ohio to strike down a law that makes it easier for members of the military to vote. Under the law, people in uniform may cast early ballots in person up to the day before an election, instead of the previous Friday cutoff for other voters.

Democrats have a transparent political motive. A May 2012 Gallup survey showed Mr. Obama trailing Mitt Romney among veterans 58 to 34 percent. "About a fourth of men are veterans," Gallup reported, "and it is their strong skew toward Romney that essentially creates the GOP candidate's leading position among men today."

The Democrats' suit alleges the Buckeye State's law is "arbitrary" with "no discernible rational basis," but it is a response to a very real problem. "It's truly difficult to vote," an active-duty service member told The Washington Times. "The military tries hard to help us out with awareness and links to state voting sites but most troops don't exercise their franchise because it's too hard."

A study by the nonpartisan Military Voters Protection Project found that in 2008, less than 20 percent of 2.5 million military voters successfully voted by absentee ballot. In 2010, that participation shrank to a scandalous 5 percent.


The Huffington Post even reported on this, as early as July 17. Perhaps their teeth are still gritted about having to do so.

Some wonder at my confidence that Barack Obama will not be United States President in the next term. Apparently, he has not been our constitutional president, this term either, but that is not what I mean. We are in what may be called a mild depression, economically. Many say we will be in a state of economic devastation within months or weeks, due to international financial collapse, caused by global collectivism and the overwhelming corruption of the central bank complex. Is it any wonder after centuries of increasing abuse, we have the new term, "banksters?"

And the knowledge of Obama's true political heritage has finally begun to saturate responsible minds in American households. We talk to each other, after we learn from dissident media such as this venue and so many others. Blaming George W. Bush has ceased to serve him. His destructive behavior in office has caused him to "own" our crippled state of affairs, however much blame is to be shared with the previous administration for its inception (and Pelosi and Reid's Democrats on the Hill). The albatross is hanging on Obama's neck and looking closely, we find it is an effigy of himself. Enough Americans recognize it now, who are motivated to vote, to tip the balance of a wary and concerned populace. Honest polling reflects it.

And here, call me crazy, but I am supremely confident that Pat Robertson actually did hear from the Lord, himself, during the past New Years' time, as I've written previously (showing the video). After all, Robertson was told during the turn of 2008 that Obama would be president, when that seemed to him and to many, very unlikely. Obama will not be in the house at 1600, which is not to say any earthly savior will reside there. 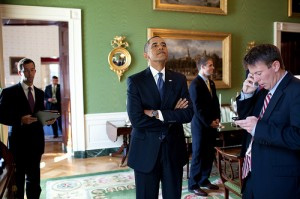 And now, we have hard evidence of BHO and the Democratic National Committee itself, trying to keep our military in a political ghetto. The news is hitting the military grapevine and will be played up by the Republicans.

In case any still wonder, can anyone expect our military, now seeing how the Democrats attack them, to be unified to press some kind of staged Obama coup? No. That will not happen. The more the neo-Marxists try to fudge, the worse it is getting for them and that is how it will continue to be.

Are you are interested in helping good candidates get elected, to replace bad ones? Then I suggest helping any truly good candidates available for the U.S. Senate, that will likely have to continue to withstand violations of national sovereignty in the form of United Nations and other kinds of multinational treaties (including, perhaps, further trade agreement destruction). The Sovereignty Campaign (SovCam) is working to vet candidates on that essential set of issues. Also, U.S. House campaigns are critical to address, in order to reset America on the foundations of the Constitution and the Declaration's principles. Or, why not apply efforts where an individual volunteer does the most good, with elections to local and state office?

If you are one of "the few and the proud" (humble, really, I suspect) who invests effort or money at election time, I would suggest not bothering to help a candidate in the person of Mitt Romney, who is doing just fine without your help, and whose own background of progressivism and consistent, tactical deceit of the People portrays himself as only the slower of two poisons. Who can trust the commitments he alleges to make?

The Democrats, in turn, should be marginalizing themselves into oblivion by now, if enough Americans have sense enough to see it.

God save America from the destruction caused by our current set of political and financial overlords, poisoning nearly every phase of our national life and both parties. As God revealed to Robertson about the destruction in process, "They are bringing it on themselves." May it be upon their heads, O Lord, and not upon the innocent — nor those who offer their "last full measure of devotion," to protect the sovereignty and freedom of our current world's "last, best hope."