Early in the morning, Jerub-Baal (that is, Gideon) and all his men camped at the spring of Harod. The camp of Midian was north of them in the valley near the hill of Moreh. The LORD said to Gideon, "You have too many men. I cannot deliver Midian into their hands, or Israel would boast against me, 'My own strength has saved me.' Now announce to the army, 'Anyone who trembles with fear may turn back and leave Mount Gilead.'" So twenty-two thousand men left, while ten thousand remained.

So Gideon took the men down to the water. There the LORD told him, "Separate those who lap the water with their tongues as a dog laps from those who kneel down to drink." Three hundred of them drank from cupped hands, lapping like dogs. All the rest got down on their knees to drink.

The LORD said to Gideon, "With the three hundred men that lapped I will save you and give the Midianites into your hands. Let all the others go home." So Gideon sent the rest of the Israelites home but kept the three hundred, who took over the provisions and trumpets of the others.


Some in Gideon's ranks may have been wondering, "God, I've already been working in what power you've ever given me. I've tried and tried to get my fellow countrymen to obey you and to take authority against the Midianite enemy – even as I join others in calling our people to repentance. Time and time again, I've tried to operate in whatever energy you've afforded me and have been running into a stone wall. I still see what needs to be done, more than ever, as things have gotten worse than ever. Where is the energy that has now been spent? I will certainly need it, now."


Fatigue makes cowards of us all.


Some may have even had been personally hurt, as if it were about them, that their past failures were due to their inadequacy, or God cruelly not allowing what He had lit aflame in their hearts to do, to be blessed and come to pass.

But then, one may think, God granted them the opportunity to know they, sinners like anyone else, deserve nothing but death and Hell and that only by God's grace did they ever take their next breath, to say nothing of having a future with Him.

That may have given these few the opportunity to see that all that is done for us, or with us for others, is done only by God's grace, and that His timing is the only timing and since it is His, it is best. His timing, His plans, His execution, His strategy and nothing else truly gains the victory. And these are trained to it all, if they are winners with Him. 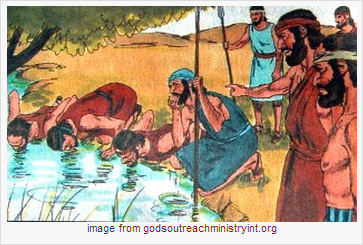 Perhaps some were pondering these things, very thirsty yet, for God's righteousness to make things much more right in their so chosen nation, in hearts and circumstances both, when they came to a stream where they could get a drink of water. And since they knew that cunning enemy against which they had already been fighting, only to barely survive, year after unsuccessful year, they did not want to take their eyes from the terrain, but reached down for just a tiny bit of water at a time, as they kept an eye out for the war that must be fought – God's war, as it had been all along.

It was likely that God had determined that circumstances needed to get worse and worse, in order to let many of the Israelites understand in their hearts that they were being judged and disciplined – despite the attempts of some to prevent the worsening of it all, in their efforts to rally their nation to faithful obedience. Perhaps some of these had previously stood as a way for God to say He had never ceased to offer means of gaining salvation from the enemy. However, they were means that had not been taken in faith and righteousness, by enough countrymen to make the difference.

And God gave those few soldiers the means now, despite their weakness, to continue to stand, this time for the difference, the deliverance that in His mercy He was granting nevertheless.

He had already told Gideon that his weakness was no excuse, rather...


Go in the strength you have and save Israel out of Midian's hand. Am I not sending you?


Simple enough, they needed refreshment. So, what did God do? He refreshed them as they took what they knew and applied it for Him. That is also what God did for Jesus, after spending forty days in the desert. That is also what He did, after Jesus' thirst on the cross. "Blessed are those who hunger and thirst for righteousness, for they will be filled."

And what have we been learning, fellow Americans?


Consider that an introduction. For further, very pertinent reading, by those who do not discount the prophetic gifts taught of in the New Testament, I call your attention to the Word of the Lord for July 2013 & Beyond, through a faithful sister and friend, named Phyllis Ford (also, those prior, if they are of interest). What I just wrote came after reading that. 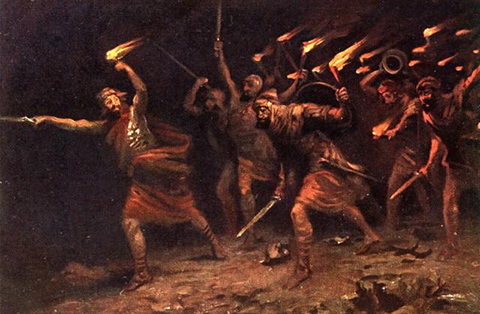