Here! – in this country! You! Blacks! "You people!" – if that is how you choose to see yourselves.

Are you Americans, or what?

When are most black folk in America going to wake up and understand that by and large, Americans don't care. We don't care about your being black. Let me say that again.

WE DO NOT CARE ABOUT YOUR BEING BLACK

We want Americans to understand and acknowledge they are Americans, since that is reality and most Americans still tend to have a bias for reality – just Americans, before we start appreciating our other societal features.

So, are you some black dude who happens to be an American? Or, are you an American who is gladly of the African heritage that many of us have here in... America?

We like your heritage. Gosh, it's great. (Pardon if some of us yawn though, whether we fully identified Americans are white, black, or any other hue and shade.)

And if you think that's not true, chances are you, like many collectivist ideologues, are being deceived by the extremely wicked propaganda of collectivist power-mongers who want to keep you held on their plantation of...

..."period!"
But if you aren't American, pure and simple, just where does that leave you, besides foolish?

What does being not quite... just... wholly... American make you, in anyone's fooled minds, besides less American?

What is our birthright, after all? And are you giving it up, and if so, for what?


Pursue peace with all men, and the sanctification without which no one will see the Lord. See to it that no one comes short of the grace of God; that no root of bitterness springing up causes trouble, and by it many be defiled; that there be no immoral or godless person like Esau, who sold his own birthright for a single meal. For you know that even afterwards, when he desired to inherit the blessing, he was rejected, for he found no place for repentance, though he sought for it with tears.

That was part one, here is part two

If it happens the reader is a Christian, he may have heard a modern-day prophet talk about a "Jezebel spirit." Let me show it to you, big-time and up in lights.

Witness the very disturbing case of Oprah Winfrey. As the viewer may have seen, here she is in Great Britain, labeling her American brothers and sisters back home, to foreign audiences, as racists (it gets "better" as it goes).


BBC Video, "BBC News – Oprah Winfrey: The Butler, racism and Obama"
No, Oprah. It is not that Barack Obama is black (though he is half Kenyan, if BHO-I is really his father; we cannot say, because his birth certificate and his Selective Service registration are very apparently fraudulent, and Obama's book about him very oddly seems to use the writing style of his formerly close workmate and subject matter of yet to be convicted conspirator communist bomber, William Ayers).

Yes, Oprah, Barack Obama is not one to respect in his profession and position, by those who respect the U.S. presidency. Yes, he deserves contempt and earthly condemnation. And yes, Oprah, he is a liar and worse.

THE REASON for CONTEMPT: Barack Obama is a pro-jihadist, crypto-Marxist, revolutionary saboteur of the United States of America, for the sake of a python-like cartel of global mega-criminals. So are many of the people promoting him, those working hand-in-hand with him, those financially behind him, and those holding the rack of puppet strings above him. Their collectivism is not true equality. It is subjection to their deceit, their theft, and as it always seems to happen and as the 20th Century should have informed us, their mass murder.

And effectively he was in Jeremiah Wright's word, "selected," and elected by desperately ignorant and to one degree or another, corrupted people such as Priestess Winfrey, who before God and man anointed him "The One." Do you still worship Barack Obama, the Marxist Messiah, the Collective-Salvation Christ, Winfrey? It seems so.

It is well past promptness to call divisiveness divisiveness, deceit deceit, and evil, evil. We can leave ultimate judgment to God and thus practice spiritual forgiveness, but saboteurs of America must be held accountable by America.

And now, part three, more of this race junk

I post this not in contempt for Americans of African heritage, but one would yet hope, as an eye-opener. It is from compatriot Sam Sewell in his blog, The Steady Drip:


How blacks say 'thank you' 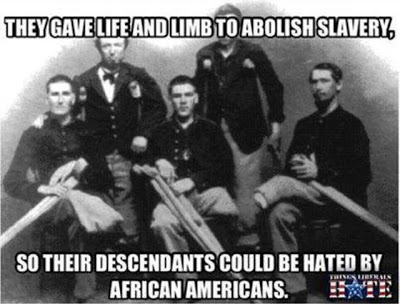 Of all 1,515,605 families in the 15 slave states in 1860, nearly 400,000 held slaves (roughly one in four),[3] amounting to 8% of all American families. So at the apex of slavery in the United States only 8% of American families owned staves and some of those slaves were owned by black Americans.

So why do modern day blacks blame the entire white race for slavery when in fact it was white Americans who stopped slavery? Gee, maybe they have been brainwashed by liberal politicians for political advantage.

Black chieftains sold black slaves to Arabs. Arabs sold those slaves to slave traders. Slavery was a fact of life. Even free black Americans owned black slaves. Black Africans and Arabs made slavery possible. White Americans stopped slavery. Where is the gratitude on the part of blacks toward white abolitionists?


And as a further demonstration of the insanity of self-inflicted harm and self-condemning iniquity and rebellion, for any American, especially of African heritage, to support the collectivist Democrats, intellectual spawn of racist eugenicist, "progressives" (Marxists and fascists) I invite the viewer to learn about Planned Parenthood, Margaret Sanger, the Negro Project, what has been dubbed Maafa 21, and last, but hardly least, the evil tool of Hell who as president has promoted Planned Parenthood and their semi-genocide of blacks in America more then any other president, before or after reaching 1600 Pennsylvania Avenue, Barack Obama. 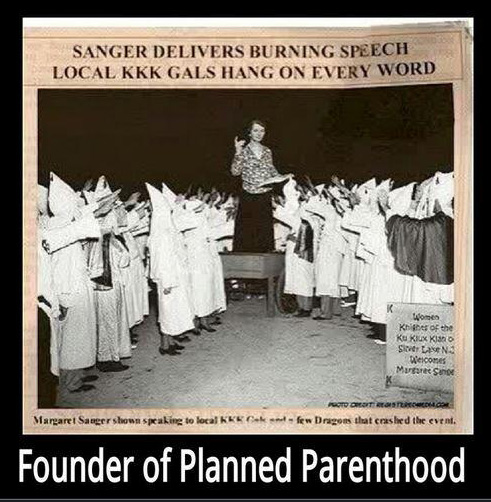 Part four of four, the opposite of a disclaimer, so I suppose it is a claimer

I, Arlen Williams am, one-hundred percent, a racist in that I believe in the superiority of the whole, free human race, sovereigns all, under God, for the purpose of dominion over the earth as the People we are, over the Marxoid monstrosity that is made of both soul and civilization by the demonic schemes of collectivism, which is inherently totalitarian despotism for the sake of the 1% of 1% of 1% and their slave foremen financiers, politicos, fascistic bosses, propaganda media, and "apparatchik" bureaucrats.

And I wholeheartedly invite you to be a human racist, too.

So, we who understand that we are fully American and have sovereign duties as such do not essentially care about your being black. We care about our red, beating hearts. We care about your personhood, just as we care about everyone's personhood, including our brothers and sisters in the womb. And we have much solemn and repentant work to do about it, here in America. Will you take up your birthright with the rest of us... or not?


"Socialism is a new form of slavery."
- Alexis de Tocqueville