April 1, 2013
The new enemy of youth and children is "rainbow journlism," which, like the yellow journalism of the past, is irresponsible and unprofessional. 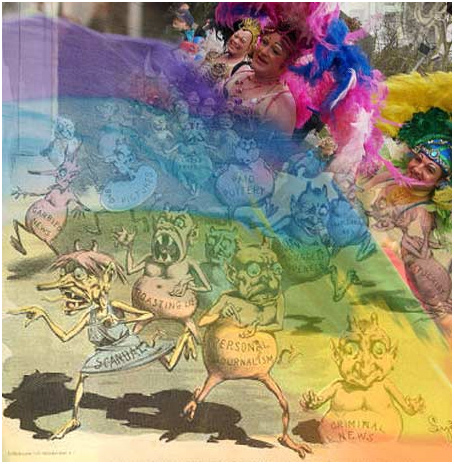 Rainbow journalism promotes homosexuality and attacks anyone who leads children into wholesome lifestyles of integrity.

If you're young, trendy and hip, and are strolling through downtown Minneapolis, you might grasp a copy of City Pages from the newstand. Its stories, appealing graphics, attractive restaurant ads and reviews of the local night club scene would seem to set you up for an upbeat weekend.

But look a little further, and you'll uncover a fanatically-driven editorial policy that promotes sleeze and liberal causes. For example, "Savage Love" is a weekly sex advice column by the notorious sex activist Dan Savage. His recent advice includes using online resources to find a worker in the sex industry for a reader's 22-year old mentally-ill brother. Ugh. The column is filled with trashy advice and crude language.

City Pages is part of a chain of 16 "alternative" free weekly papers around the country with a hefty combined circulation of 1.8 million. You wonder, an alternative to what? It's an alternative to what is wholesome and true; City Pages promotes strip clubs, homosexuality, and condemns any moral message of Christianity. It scorns patriotism as well. One front-page display contained a mock-up photo of the Statue of Liberty with the words, "One nation under tacos."

Around 1900, yellow journalism screamed at its readers with sensational headlines, weakly-supported facts, with a show of being legitimate by claiming to champion the underdog. Today's yellow journalism jabs at morality, criticizes Christian organizations, all with name-calling and mockery. The only underdog it champions is the radical homosexual who demands that all of his sexual practices become codified in law, while crushing those with contrary beliefs.

It's a kind of news adolescence that never grows up. Let's call it "rainbow journalism."

But some news outlets never grow up. Like the crowd that shouted for Christ's condemnation on Good Friday, City Pages relies on a lot of emotion, few facts, and is quick to slam anyone who stands for morality.

It's no wonder then, that every few weeks New City trots out hate-mongering articles against Christian rock musician and preacher Bradlee Dean and his ministry, You Can Run International, based in Annandale, just outside of Minneapolis. (Disclosure: You Can Run International is a client of our PR firm.) New City has covered Dean's defamation lawsuit against MSNBC's Rachel Maddow in snarling tones. They accuse his ministry of not only gay-bashing, but now have made dangerous accusations about his family.

I don't care what your politics are, but going after your enemy's family is just plain evil. What could be done against the paper if it were not protected by a too-broadly defined First Amendment interpretation today that allows the big media to destroy someone's reputation?

What enraged City Pages: You Can Run International's school presentation in Dunkerton Iowa, above, which quoted Elton John and Lady Gaga in their support of homosexuality.

Dean's presentations in more than three hundred schools around the country warn about bullying, drug use, and yes, the very real dangers of abortion and the homosexual lifestyle. The talks also emphasize the Biblical basis of our country's Constitution. Having grown up in a broken family himself, Dean knows what it's like to struggle through the teen years. Now he is driven by a passion for helping youth not make the same mistakes, to turn to wholesomeness and integrity of character. What's wrong with that?

All of this is threatening stuff for City Pages. As a matter of fact, the newspaper has teamed up with its Phoenix look-alike New Times (both are owned by Voice Media Group) to slander Dean's attorney Larry Klayman, the founder of Judicial Watch, a non-profit law firm which attained notoriety through 18 civil lawsuits against the Clinton Administration. New Times, which had never heard of Klayman until he represented Dean in his lawsuit against MSNBC host Rachel Maddow, now puts Klayman in its sights. The paper has in fact dragged Klayman's family into the battle, making up stories about his failed marriage.

Voice Media Group has thus added Dean and Klaymen to its enemies list, which also include Sheriff Joe Arpaio, the popular elected sheriff of Arizona's Maricopa County, who has taken an outspoken stance against illegal immigration. Klayman has represented Arpaio, fighting his recall effort.

So the new enemy of youth and children is "rainbow journlism." And it's no surprise, since sex to them is something enshrined unto itself, something only for pleasure, practiced to the exclusion of the possibility of children. Maybe the patrons of these papers' many advertisers should stay away from doing business with them like the plague.